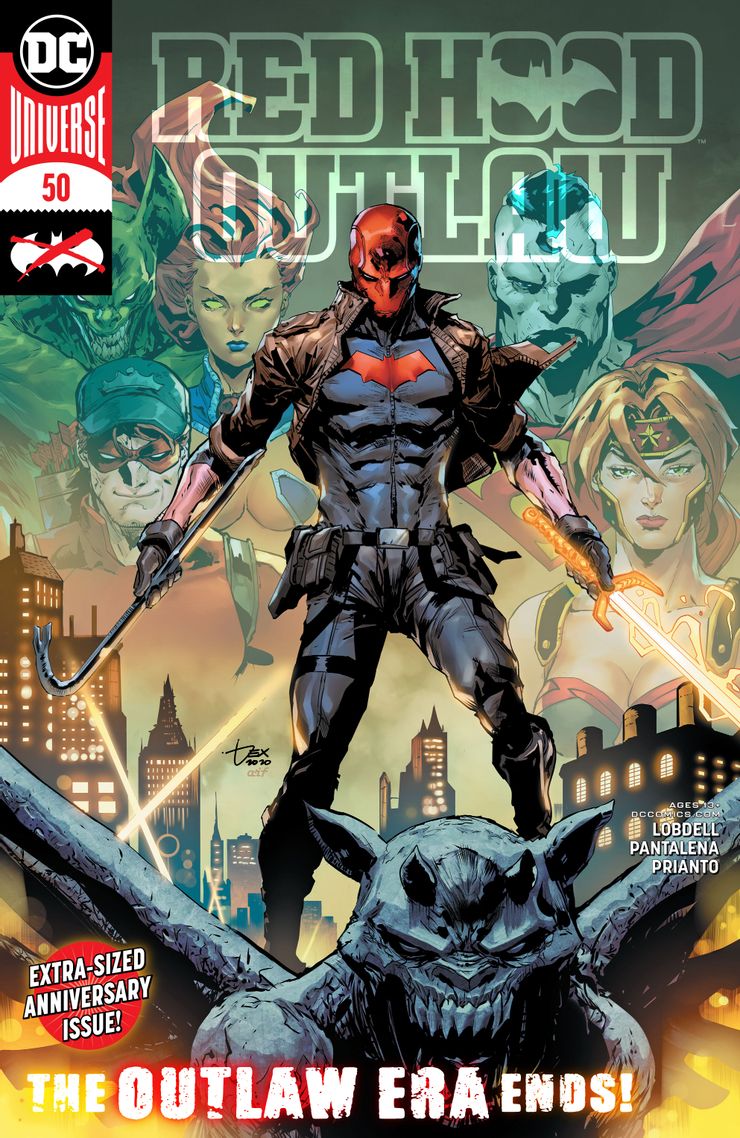 Overview: Red Hood: Outlaw comes to its conclusion as the Outlaws’ partnership ends, and Jason Todd’s next journey begins.

Synopsis (spoilers ahead): The concluding issue to Red Hood: Outlaw begins with a moment from a month ago as Jason, Artemis, and Bizzaro enter through a concealed entrance into a cave hidden within a mountain in Gotham. Jason’s anger is palpable; his fury can be seen in the trail of unconscious henchmen he leaves in his wake, each nothing more than an inconvenience hindering Jason from getting to his goal: rescuing Duela Dent. Despite Punchline’s illusion, Jason had learned the truth of Duela’s faux death, a realization which led him to search under every stone in Gotham and a decision that led him to the camouflaged cave.

Duela Dent is the same age Jason was when he was beaten to death with a crowbar and is a child who has no one…except Jason.

Now, in the present, Jason sits beside Artemis in one of the bedrooms in Ma Gunn’s Home for Wayward Boys as the sun rises, confiding in her that his pensiveness is due to a melancholic nostalgia. He misses his friends, Bizzaro, who now sits on a throne in Hell (or, one of them), Roy, killed in rehab, and the closeness he once had with Kori that no longer exists.

Artemis explains gently that Jason is feeling this because he’s human and asks if Jason knows why the Outlaws follow him.

“Because you all couldn’t get into the Justice League,” is Jason’s joking response.

Artemis’ reply is cut off by a shout from outdoors; Monsieur Mallah is attempting to teach Generation Outlaw–a group of young misfits currently staying at Ma Gunn’s school. Their lesson is brought to a sudden conclusion by Jason, who isn’t happy with Monsieur Mallah’s teaching style.

Before things can escalate, Ma Gunn herself, along with the Brain, appears and reprimands Jason for barging in on Monsieur Mallah’s lesson. Jason argues that the kids are his responsibility, as he’s the one who made a deal with Lex Luthor. His rhetoric is refuted by Ma Gunn who shoots back that Jason abdicated his responsibility by constantly leaving the kids in her care; she refuses to send them out into the world ill-prepared for conflict. Jason needs to either trust her methods or take his charges and leave. The ringing of Jason’s cell phone delivers his acquiesce promptly–the kids are all hers.

Jason and Artemis depart and arrive twenty minutes later at the privately owned R&D complex located in the center of the earth, otherwise known as the Cube. Dr. Shay Veritas greets them and leads them over to Duela, explaining that she isn’t sure whether or not the young girl’s unresponsive behavior is normal.

Knowing that without her mask of the Joker’s skinned face–her totem–Duela won’t be able to function, Jason produces a replica of the mask and ties it around her face. It prompts a reaction; Duela begins to laugh hysterically.

The scene changes to the Iceberg Cassion in Gotham, currently being run by Suzie Su, a ‘frenemy of the family.’ Jason begins to thank her for looking after Duela, but Suzie cuts him off.

“Your ghastly friend is little more than psychotic killer fueled by rage.”

Jason mentions that her description is more than fitting for all of them at one point or another before making his way to Suzie’s private gym with Artemis. He watches Duela make pitiful progress on the parallel bars, and as she does, Jason goads and insults Duela enough to spark her anger, which snaps her out of her lethargic stagnation.

The scene shifts again to the Wayne Family Graveyard, where Jason shows Duela his tombstone. He explains that after his second chance, he screwed up because he was angry and vengeful and that he won’t stop Duela for going after vengeance of her own. He just wants her to know that while he can’t stitch together the hole in her heart, he will be there for her.

They return to Ma Gunn’s home and that night Jason admits to Artemis that after he stepped out of the Lazarus Pit and realized he was healed from all his scars, he was upset. Artemis says she understands why and responds to Jason’s comment that he might love her by saying that he might not, and that’s okay.

Later, Duela slips outside, intending to find her revenge, despite Jason’s warning not to, but her break out is halted when she runs into Pup, the sentient Superman toy. She ends up confessing to him her backstory, how her parents are terrific people who really loved her, and Pup tells her that he’s sure they miss her. Duela and Pup end up falling asleep outside, and when Jason finds them there, he simply lays his red jacket on them and leaves.

Days later, in New York City, Jason asks Duela if she’s ready to fight on the side of the (sort of) angels as they, along with Artemis and Pup, stop a robbery. Duela agrees positively and as they start beating the bad guys up, Duela screams as she has an epiphany. With no rhyme or reason, Duela decides that she doesn’t want to do any of this anymore, and what she wants is to just go home.

One week later, Jason and Artemis drop Duela off at her parent’s house, leaving Pup with her to ensure her safety. Artemis assures Duela that living the life she truly wants is the greatest act of defiance, and Duela thanks Jason for helping her not following in his path. Duela disappears inside the house, and Jason and Artemis turn their motorcycles back to the road and begin the ride home.

Artemis draws to a halt some time after and tells Jason this is the end of them. She explains that she’s genuinely happy for Jason and all the progress he’s made since they’ve started out as Outlaws. But now, Jason doesn’t need her, or any of them, and Jason can’t deny that. Artemis kisses him on the cheek, saying that it was an adventure but now, Jason’s going to be fine.

After promising to see her around, Jason doesn’t watch her leave, feeling alone–an emotion much better than rage, betrayal, anger, or vengeance. Jason thinks about how now he’s finally giving himself the time and space to celebrate his return to life as a miracle. He might not have been the best sidekick and a terrible supervillain, but he definitely was one hell of an outlaw and best friends with some of the greatest people he’s ever known.

After returning once again to the road, Jason surmises that perhaps, that’s what his whole journey so far has been about; being the best Jason Todd that he could be. And now, at the end of the day as Jason’s motorcycle speeds down the freeway, lit traffic signs announcing the next exit for Gotham, he’s just a guy…going home.

Analysis: This final issue in Red Hood: Outlaw is the conclusion to Scott Lobdell’s run, turning closed the last page of his Outlaw era. Despite the rough scene transitions and slightly rocky writing, I think Lobdell successfully told Jason’s story and showcased his growth in this final issue.

Jason’s catalyst to becoming his current superhero persona originates from his death at the hands of the Joker and then subsequent resurrection. Due to his time as an Outlaw, and more importantly, the friends he’s spent that time with, the emotions and drive that he began his Outlaw journey with are not at all the same ones he’s ending it with. In a way, although Jason wasn’t able to save himself from dying and falling into a path of revenge, he’s able to use that experience to help save another from replicating those decisions. A very Batman-esque thing to do. Additionally, I appreciated how Lobdell highlighted Jason’s change in perspective as well as his changed outlook on his own life; that him coming back from the dead is miraculous, something to be celebrated.

I think, due in part to this being Lobdell’s concluding issue, there were several aspects that came across as rushed and somewhat forced to me. First, it’s only at the very end of this story do you see Jason and Artemis in a (kind of?) relationship. It’s one that’s pretty vague and undefined, which is unfortunate. There is a lot of material that could have been utilized to build something between Jason and Artemis that’s more than just Outlaws-in-arms turned friends to friends with benefits. It did seem a bit counterintuitive to refrain from ever really constructing a romantic relationship with these two characters until the last issue and then write it as one that doesn’t impact their lives in any way. While it does make their separation at the end that much easier, it read as some weak writing to me.

Second, I thought the scene with the Generation Outlaw was sort of just…shoved into the issue as an attempt to wrap up their stories. I understand that, again, it was a way to divest Jason of his responsibility to them and allow him to return to Gotham, but it lacked finesse.

Third, Duela Dent’s sudden change of heart. To be fair, I actually do like the idea of an anti-hero deciding that they just want to peace out and live a good life with their loved ones. In Duela’s case, Jason’s moments of guidance and mentorship were touching, gave direction to Duela and insight into Jason’s thinking. However, chalking up Duela’s one-eighty to having a ‘sudden epiphany’ and refraining from explaining what exactly it was, made me raise my eyebrows (in one of those “really?” expressions.) Perhaps, instead of some nebulous thought process, had Duela’s switch been illustrated clearly and inspired because of Jason’s influence, the story would have felt that much richer and reasonable.

Despite my grievances with these points, I really liked the ending, especially the last few dialogue bubbles. There’s some remarkably relatable about realizing why you’ve lived through certain life experiences and deciding where your journey is finally leading you. In the case of Jason Todd, there’s a certain sense of peace and redemption that’s being communicated within the prose on the last page, and I do have to admit, it’s a nice change. It’s somewhat difficult to separate the character from his volatile and extreme emotions, as it could be argued that one helped form the other, but I think developing Red Hood in this positive manner presents an interesting challenge and opens up doors for other possibilities in terms of storylines and further character development. And lastly, a chance to see the second Robin back with those he started with and the place where his story began: Gotham.

So cheers to an arc that’s now ended, and here’s to the ones yet to come.

Final Thoughts: Throughout Red Hood: Outlaw there have been some wonderful and not-so-wonderful moments, delivering a story the impressed more at times than others. While the flow of the plot and the art weren’t always that appealing, the characters–Jason, Artemis, and Bizzaro– were endearing and entertaining and I did enjoy reading them as a team. I’m grateful for the stories we were given and hope to see more with these characters in the future.