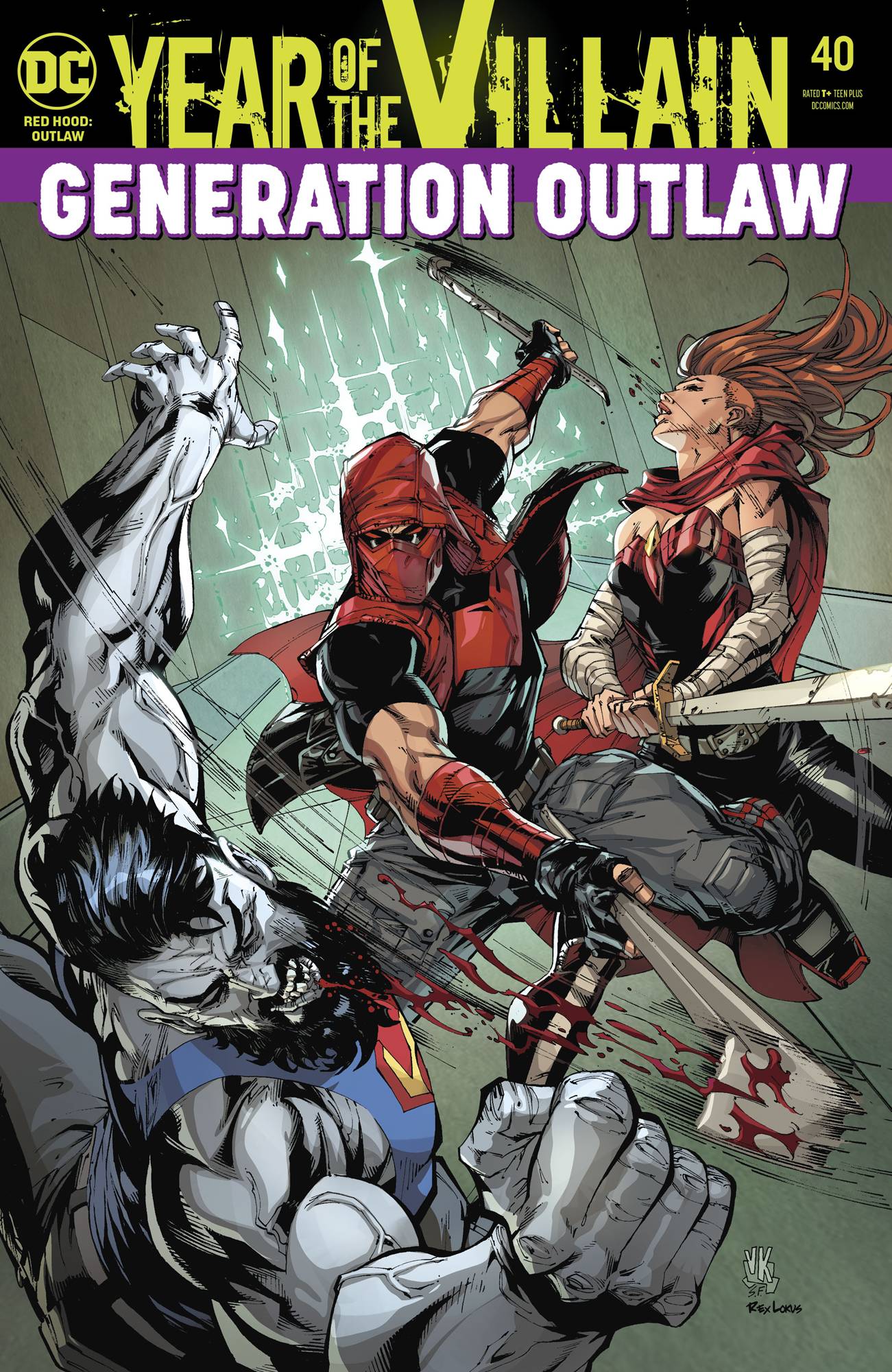 Overview: Jason takes the kids home the long way, and then leaves them to go on his own.

Synopsis (spoilers ahead): Our story opens up with what, in my opinion, has to be the greatest Outlaw opening ever. Jason Todd and the gang are riding in an Uber to their next destination while Jason checks Google Maps on his phone to make their way. It’s so silly seeing the ordinary Uber driver trying desperately to avoid a panic attack in his situation. We get a small rundown of our cast and crew, with some more teases at Cloud 9’s true power as they witness the Doom symbol in the sky. Cloud 9 confirms that the symbol isn’t actually above them, but rather it’s appearing all over the world. Her powers seemingly allowing her to perceive the entire atmosphere.

After finally accessing the teleportation device needed to get into the lab, they fall on their butts (sans Cloud 9 who can fly, and Jason who gracefully does a superhero landing). Our teenage taskforce continues to bicker as Babe uses her zombie mom to hack into the base. All seems quiet, but Jason wants to scout ahead to make sure, making a very personal, but out of context reference to getting beaten with a crowbar when trying to dissuade the kids into doing anything reckless or stupid, but he knows they’re all going to disobey his orders after a few minutes.

Jason muses to himself about how similar the structure looks like his old base that Bizarro had made, giving new readers some exposition about what happened to the old Outlaws team. He ponders about his current goal of training a new generation to not be as stupid as he was, commenting on how even for just a sliver of a moment, he saw them behaving like “kids” again.

And no sooner does Jason leave than the in-fighting escalates. Devour calls Doomed a monster and DNA steps to his defense, calling out Devour’s own monstrous behavior with his extendable jaw and bizarre appetite. Cloud 9 has had enough and runs after Jason, and DNA and Doomed follow suit, going their own way through the facility. Devour strangely runs after them all even though he was the one who instigated the fighting, with them all leaving Babe and her Zombie mother behind in the security lounge.

Jason encounters a swarm of Shay-clones operating the Base when Cloud 9 appears behind him, making a small racket. The clones are alerted and they attack, forcing Cloud 9 to unleash her typhoon/tornado level power when she gets anxious. Meanwhile, DNA confirms my shipping suspicions from the last issue and confesses to Doomed that they are attracted to him. It’s honestly one of the sweetest moments in the story and it’s going to get everyone gushing when they get to this part.

And on a more sour note, Devour is in an emo rage about DNA’s monstrous retort, giving us another flashback to his past, scavenging for “Food” among abandoned cars left in rundown towns. Devour finds a little boy whose lost and Devour’s tsundere’s antisocial side won’t show the boy any actual niceties, but he calmly takes the kid with him anyway and fails at trying to console the kid. “Worst case scenario: we die together”.

Jason is able to calm down Cloud 9 by using a new gadget Shay installed in his suit to absorb the lightning Cloud 9 is firing (or maybe he’s firing lightning at Cloud 9 as it’s hard to tell as the art isn’t clear) and he and the energetic pupil keep moving forward. Meanwhile, Babe is putting soda in her milk bottle and musing about how she’d like to just be a normal baby sometime, and not a megalomaniacal supergenius. Doomed and DNA uncover what appears to be a hospital containing a strange, cancerous lifeform screaming for help.

Our issue ends with Cloud 9 and Jason running into what looks like the current Bizarro and Artemis, but they immediately try to attack Jason, with Bizarro knocking him unconscious with a single super-clap.

Analysis: My prayers have been answered. After the last Outlaw issue, I was hoping we’d keep the character-development train going, and Lobdell did not disappoint. So much character exploration and development happened in these pages. From Devour’s mopey anti-hero progression to DNA and Doomed falling in love as fast as teenagers do. Babe steals the spotlight in my opinion with her single line. “What if this is all too much for me? For right now. What if I’m just supposed to be a baby?” The small environmental humor, like with the Uber driver, the constant bickering, it’s all so well done, that I can’t really do much beyond telling you to get this issue.

If I had to nitpick and produce some criticism, I’d have to say that the fights we got were pretty boring. Cloud 9 whips up a tornado and Jason fells her with one shot. I get that it was just to lighten up the scenes so it’s not all just deep character exploration, but I feel like it could have been better explored.

Cloud 9 continues to be propped up as way stronger than the rest of the team, held back only by her own inexperience and anxieties. The entire team is proving itself to be the next Teen Titans though, and I’m really hoping we get a crossover between the two teams eventually.

Final Thoughts: There’s so much good character development that I must say that you should read it.