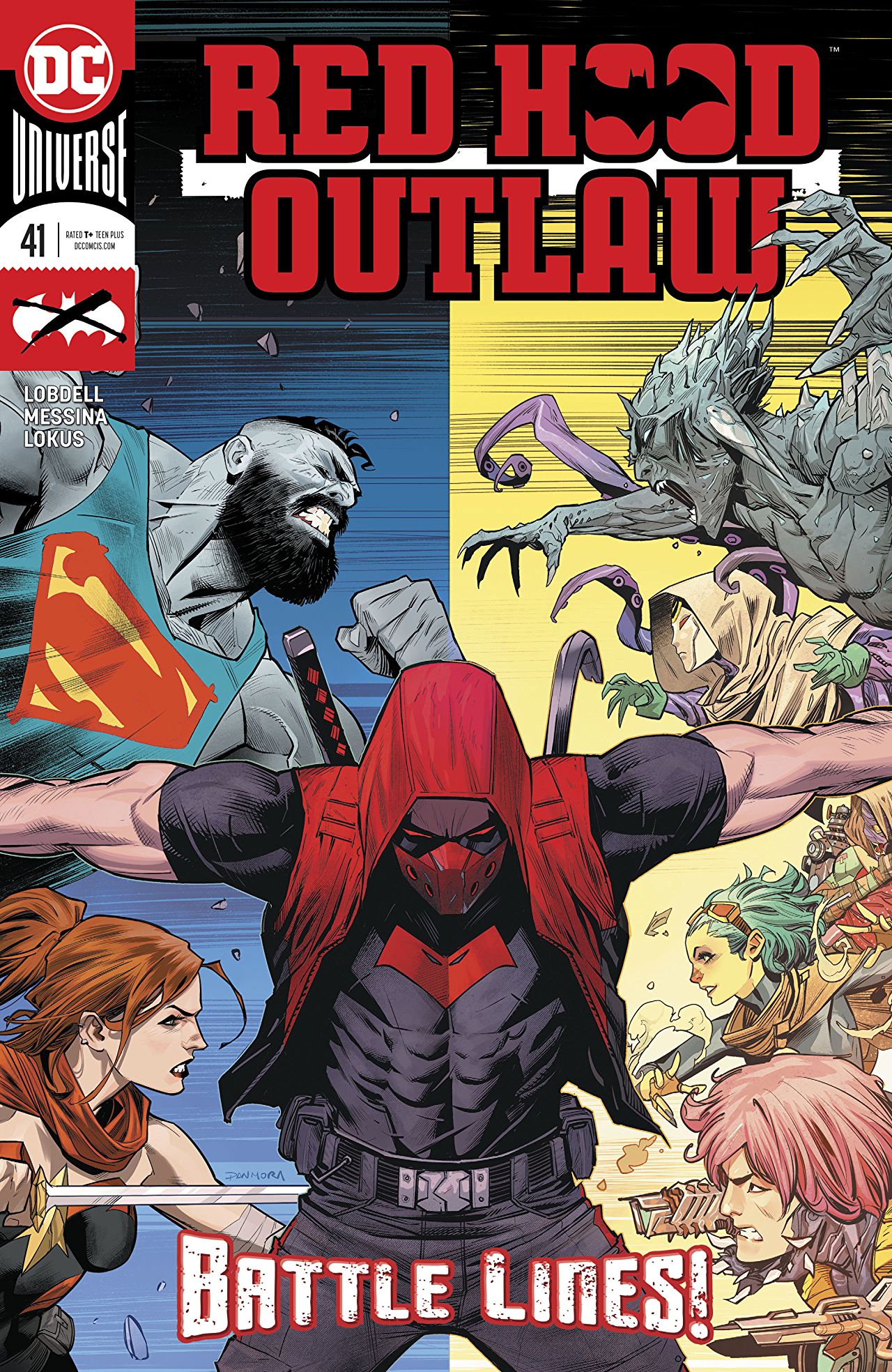 Overview: Everyone gets reunited, well, everyone that matters.

Synopsis (spoilers ahead): Starting the story off, we flashback to Jason right after the wormhole collapsed that sucked Bizarro and Artemis away. We get a weird bit of dialogue from Jason regarding the parting kiss, “But it was nice.” “For a girl.” After, we get a splash page of Jason and Roy Harper before Roy’s death. Jason is still recovering from the brutal beating Batman gave him. Roy makes an astute guess that Jason is in love with Artemis, but Jason shrugs it off by associating his feelings for her as simple teammate worry, like how he felt for Roy and Kori back in the New 52.

We end with a tragic line about “missing me when I’m gone” from Roy (too soon, too soon) and return where we left off in the last issue. Jason is lying unconscious from Bizarro’s super-clap, and Cloud 9 is forced to fight off Bizarro and Artemis by herself. Cloud 9 whips up a tornado to get Jason and herself to safety, and we reconvene with Devour and the little kid he found the last issue.

Through some amazing internal narration, we learn that the kid is actually the bad guy behind all of this. He’s the metahuman kid Jason spoke to in this year’s Annual, using his ability to possess Bizarro and Artemis and make them attack the team.

Elsewhere, we meet up with Doomed and DNA still trying to figure out who-knows-what is going on with these cloning chambers (or what looks like cloning chambers). DNA shows some meta-humor in response to Doomed trying to speak and uses manipulation powers to temporarily fix Doomed’s ability to speak, so he can give them some exposition on what happened to this facility. Apparently, the place was present to a huge industrial accident that hurt a lot of people, and Dr. Veritas has been trying to help those who had been injured.

We move over to Babe-in-Arms, who, just like a baby, ended up falling asleep after she gave herself her soda-dinner last issue. She wakes up, talks to herself, and then seems to come to some kind of epiphany.

Next, we bounce over to Bizarro and Artemis who are marching through the hallways as Cloud 9 hides Jason and herself in the air vents. Jason comments on how all of the hyper-egos of the kids won’t let them avoid being the hero in this situation. Bizarro proceeds to rip open the air-vents, dropping them onto the ground.

Cloud 9 tells us that she’s still worn out from the last tornado she whipped up, but Jason reads his students like a book, anticipating their sudden arrival as Devour suddenly shows up, using his powers to increase his bulk and power, body slamming Bizarro, and knocking him away from Jason and Cloud 9. Jason goes on to deal with Artemis while Devour holds off Bizarro. By “holds off” I mean Jason smooches Artemis to screw with whoever is mind-controlling Artemis. They get annoyed that Jason made them break character and ditches the possession altogether.

The team races after the kid Devour was with, who now has vanished, with Cloud 9 demonstrating a new element of her powers. She visualizes the heat signatures of the kid’s footprints to show a trail that she’s following. Jason remarks on how ill-informed he is on each of their powers, and he and Artemis begin to banter like old times.

Jason name-drops the kid as “Vessel,” a rejected student of the school who wanted revenge for being tossed away. He reveals his plan was to build a bomb using Dr. Veritas’ clones and use her medical lab as blackmail to stop her from interrupting him. However, last issue, Cloud 9 whipped up a massive tornado that destroyed the bomb and clones. Then DNA and Babe return, revealing they saved both Dr. Veritas and the injured scientists using their combined abilities.

Dr. Veritas brings up how unsafe the facility was after Vessel’s assault and Cloud 9’s tornadoes, so Ma Gun invites them all to live in her “Home for Wayward Boys.” There, we see everyone who’s been a part of this story up until now all having some delicious breakfast.

Analysis: I thought this issue was pretty well put together. I think I’m going to write something up that covers this entire arc, so stay tuned until then. For now, this was a decent, albeit kinda boring finish. Everything just finishes a bit too nicely.

First, I’ll go over my thoughts on Vessel. His powers don’t work like advertised. For instance, the Deadman power he demonstrates to control Bizarro and Artemis, I may be ill-informed about Deadman’s power set, but I’m fairly certain you need to POSSESS someone for his powers to work. And Vessel was very clearly inside his own body while controlling the two. Maybe there’s some example of Deadman mind-controlling people beforehand, but I never encountered it, and it doesn’t feel intuitive. Using Deadman as an example assumes you expect your readers to know what Deadman is capable of. Every instance of Deadman I’ve read or watched involved him possessing people whole-sale, no partial possession.

Let’s give Scott Lobdell the benefit of the doubt and move on to the rest. DNA just fixing Doomed’s speech defect, so that he can deliver information feels lazy and half-hearted. This information could easily be figured out with a leftover news clipping, having DNA give the exposition, or by using some of this amazing lettering work Troy Peteri has been giving us this issue. We could have had Doomed give the exposition through mental narration like Vessel was giving earlier, with small interrupts with his slurred voice, and DNA being able to understand him like she was earlier. Instead, we get this tongue-in-cheek Meta joke about Doomed’s speech problem (which I actually liked a lot) and have DNA just dub over Doomed’s words.

Lastly, in terms of power setups, you probably think I have an issue with Cloud 9 being able to track Vessel’s heat signatures, but no, that matches up with Cloud 9’s other abilities. She showed up the last issue that she can see everything happening around in the entire atmosphere and indicates she can visualize the weather. Well, what is the weather but the difference between hot and cold air interacting with one another? On a very very simple level, Cloud 9 could easily see where the air had gotten hotter than normal from Vessel’s body heat and been able to follow it.

The ultimate problem I have with this story is that there’s no real climax. Everything wraps up just too cleanly. I feel like this story would have benefited from an extra issue, allowing us to have Vessel really show off what he was capable off, possessing the Veritas clones, using some other death-related powers to fight off the rest of the gang, just like with Doomed, except as an actual antagonist. He just so easily forgives Jason for letting him get abandoned. He just rejoins with them as if nothing happened. I mean, sure, his plan was stopped with nobody really getting harmed, but in terms of a story-arc antagonist, a character designed to give us some good thematic closure, I just don’t get what kind of ending this was supposed to give us. It feels unearned. They just win, like it’s that easy.

I mean, don’t get me wrong. This issue is fine. As a single standalone issue, this is a great issue. Everyone gets time to shine. The stakes are clearly established and the problems are solved accordingly. It just feels like there’s this big empty void of unfulfilled catharsis that I wish we could have gotten to end this whole thing.

Final Thoughts: The story is decent. It’s a fine conclusion to the Generation Outlaw story arc. I just wish we could have gotten something a lot better.