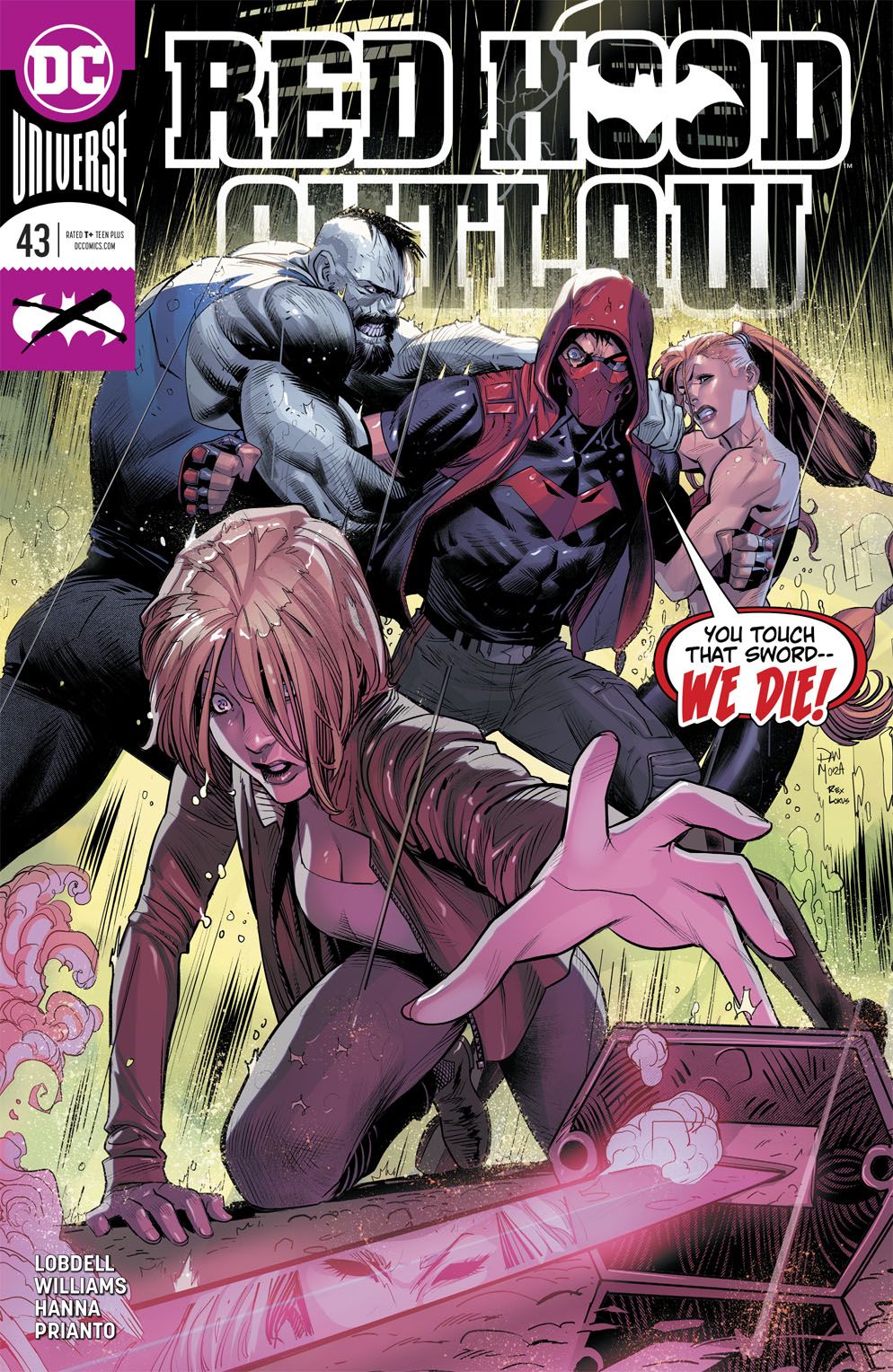 Overview: The original gang goes on a heist, while someone steals from them.

Synopsis (spoilers ahead): Our story begins with Suzie Su’s stabbed corpse lying on the ground. Blood drips from her wounds. Soon we realize this all fine since she’s apparently immortal. She reveals that whoever killed her did so to make off with the magic sword Jason had collected a few issues ago. Su decides not to tell Jason since he never gave them his number, and whoever stole the blade will come to him anyway.

Speaking of Jason, we then convene on him, Artemis, and Bizarro, fighting two random girls who are stronger than Jason but significantly weaker than the two super-powered teammates. The two take care of the girls easily and proceed to hijack the train they were fighting on. They exposit that they were on the train because of an anonymous tip involving a “dark cargo,” which they probably believe to be a lead on Artemis’ missing ax, but instead they find a sports car and an obelisk. Jason, seeing the obelisk, realizes that they are dealing with magical beings from his all-caste days. They seem impossible to defeat at first, but Jason one-shots them with his magic swords. He is confused as to why he couldn’t identify their magical nature right away.

His confusion is then interrupted by General Glory, and old Golden Age superhero who reveals himself to be the anonymous tip that led them here. His commanding attitude gets into direct conflict with Jason and Artemis, who don’t take kindly to anyone giving orders. Glory tries to pull rank on them, but Artemis and Bizarro remind him that they aren’t even citizens of the US. Glory realizes that the only way to convince them is to explain the stakes. The obelisks are apparently very powerful and increase the magic monsters’ numbers by hundreds. Realizing that that’s not a good thing, the Outlaws agree to do the job.

Meanwhile, Ma Gunn is holding auditions for teaching positions at her new home for wayward kids and Isabel, Jason’s on-again/off-again girlfriend finds the all-blade that was stolen at the beginning of this issue. Upon touching it, she becomes possessed by Jason’s ex-girlfriend.

Analysis: This comic is pretty mediocre. It’s not really bad, except for the art, which I’ll get into first because, good lord, this art bad. Last month we had a lot of people giving Paolo Pantalena a lot of criticism for how he drew Artemis, but at least he drew everything else in that comic like the gorgeous work it was. Christopher Williams, on the other hand, seems to have seen that criticism and decided to make everything look terrible instead of just making Artemis look good.

Credit where credit is due, Williams did answer the criticism that Artemis was drawn like a Barbie doll and drew her with actual muscle, but his work looks even more plastic and doll-like than Pantalena’s. He can’t seem to draw human faces at all. Everyone looks like they are about to take a dump, and there’s this weird combination of detailed muscle and bone, combined with cartoonish portions and details. There are so many splash pages, which should have the most detail since they are the least complex, except instead he makes these half-drawn markings that look like they were drawn with Williams’ bad hand.

Arif Prianto’s coloring doesn’t do this issue any good either. He can’t seem to pick a single color saturation. He tries for this glossy, highlighted look, but instead, it makes everything look fake and artificial. Honestly, he should have just stuck to a single color since he’s doesn’t know how to do saturation properly. Next, let’s get into the structural layout of the pages. Let’s use page 10 as a clear example of everything going wrong. It’s only four panels, which should be easy enough. The first panel establishes the scene as the heroes enter the cargo bay, and faces are barely identifiable despite standing mid-ground. There’s this sharp, ambient light coming from above, but no clear light source, and with plenty of deep shadows. By all accounts, the only light source in the room should be coming from the torn hole in the ceiling, which means the light should not be so evenly distributed, and these shadows should not be so intense. Not only doesn’t that, but the highlighting being done seem to have a single, consistent angle of origin. Everyone is just lit up with highlights from top to bottom, ignoring the fact that there are these deep shadows everywhere. These highlights were easy enough to ignore early in the comic because they were standing out on a moving train, but inside it’s impossible to ignore. And that’s only the first panel.

In the second panel, we get this uncomfortable group close-up as Jason takes off his mask. They seem to be walking towards the reader, but the stone-like postures and clay-like features make it look like the environment is moving away from us instead.

Finally, we get a basic panel where Jason removes the tarp off the obelisk. According to the environment of the room, Jason had to have made a complete 180-degree turn to look at the cargo behind him, or the “camera” did a 180 when it was positioned in an almost static spot for this entire page.

I’ve given this comic enough flak in the art department; let’s look over its story instead. It’s so generic. Bizarro is constantly making these zingers and sassy comebacks when he’s always been the sweet, calm guy. He also behaves a lot more “normal” in terms of intelligence until General Glory shows up, and Bizarro is suddenly a bumbling moron. Maybe this is an intentional disguise and he’s only pretending, but Bizarro is not supposed to be that smart. Sure he’s achieved a sense of enlightenment since the last issue, but as any D&D player will explain to you, wisdom is not the same as intelligence.

The secondary stories are also boring. Lobdell really refuses to explain anything that happened in the new 52 runs from before. We barely got a glimpse of Sue’s abilities when we ran into her he first time with Roy, and by the time Jason had control over the Iceberg Lounge, Sue barely did a thing to indicate she had power. Now we are suddenly being expected to remember she has this immortality power; why did you end the last issue with her being stabbed to death and make us linger so much on her bleeding corpse like she was dead?

If we are meant to know she’s immortal, it’s pointless and exploitative. If it’s meant to be a shocking revelation, actually explain why she’s still okay in the end. It’s bad writing to expect your audience to remember plot information from nearly a decade ago.

Next, let’s take a look at the Ma Gunn interview session. It’s obviously intended to be played for laughs, but what exactly is the joke? The three “guests” we get are what look like a Talon operative, Giganta, and Mr. Mxyzptlk. Lobdell uses the standard technique of breaking up multiple conversations across a single one, but while other writers will make a stream of questions to answers, instead 6 irrelevant panels that have nothing to do with one another. Ma Gunn asks why someone wants to be a teacher; we get her thinking that the Talon guy is asleep because he won’t talk. She asks how they found out, and Giganta says she’s a people person and kids like her as if she was answering the first question, not the second one. She doesn’t even ask a third question, just instead of getting a height-joke out of an inter-dimensional god, asking for a phone book to sit on, when he can just fly. None of these are punch lines because they don’t follow through on any setup.  This side plot then ends with Monsieur Mallah and Brain, who are Doom Patrol villains, showing up, apparently very familiar with Ma Gunn, asking to be teachers.

Isabel’s side plot is more excusable because it’s a teaser for the next issue, though that doesn’t inherently make it a good teaser outside of “Oh no, the random girl Jason hung out with a few times is now evil.” Except, they made it clear in the last issue that Jason and Artemis are slowly rebuilding their own relationship together, so Jason and Isabel are basically a non-entity together. Jason’s first ex-girlfriend is now possessing his current ex-girlfriend like that means something.

Final Thoughts: Ultimately this issue was garbage. They barely explain at all what the new plot is going to be, and most of this is going to be explained better in the next issue. So just skip this one.