Review: Red Hood and the Outlaws #36 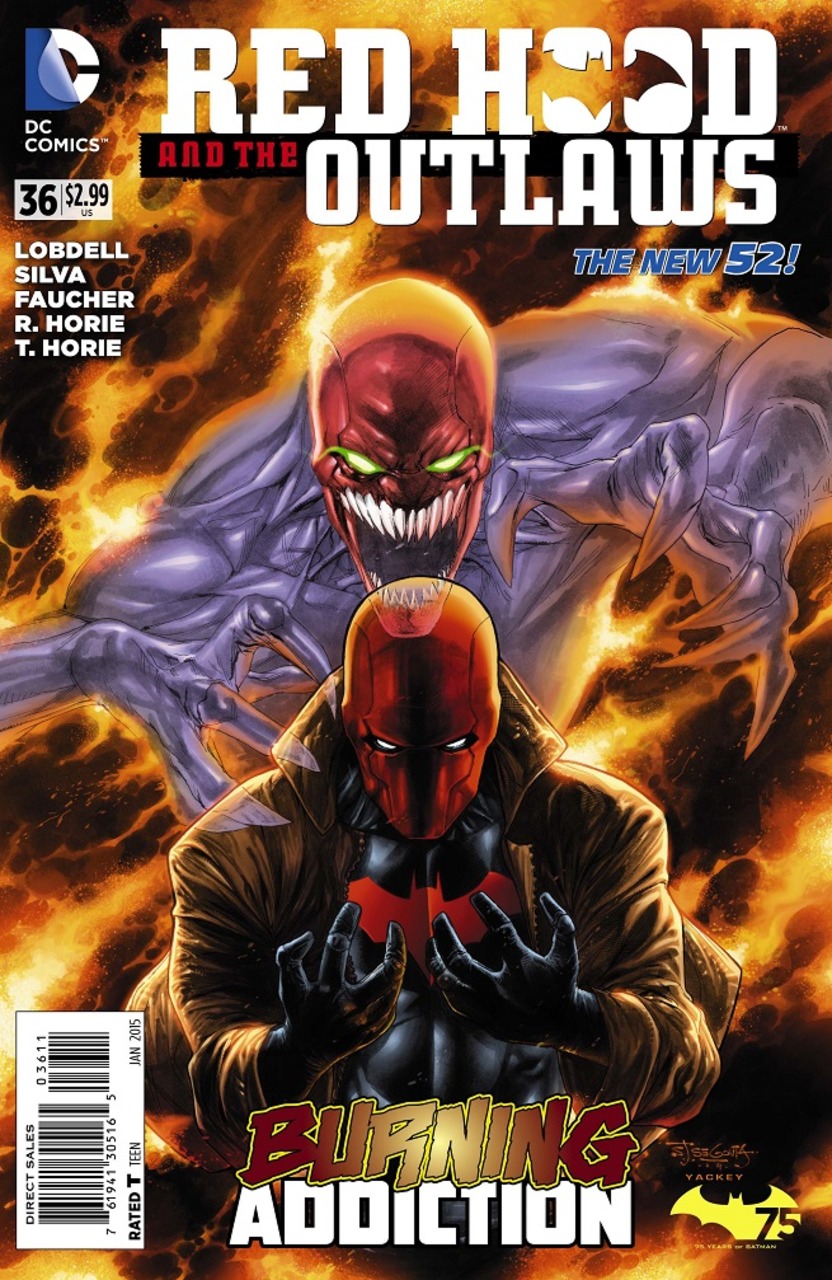 This issue of Red Hood and the Outlaws opens with Jason Todd in the throes of a self-induced venom rage. Seeing his enemies as mutants, Red Hood relentlessly offers them a timely demise. It is interesting to see Jason Todd in this situation. Trained by Batman, Red Hood shares some of his general sensibilities in regards to morality. However, under the influence of the venom, Jason is an unstoppable killing machine; ready to destroy everything in his path. I enjoy the way that Lobdell uses this situation to explore the vulnerability of superheroes when presented with temptation.

Roy and Kori’s story picks up immediately following the events of issue #35. We are presented with Starfire delivering Roy’s burned body to the emergency room. Although Starfire is responsible for Roy’s burns, she quickly evacuates the scene after delivering his lifeless body to the hospital orderlies.

In the hospital Oliver Queen confronts Jason Todd about the events that led to Roy’s current condition. Their dialogue feels like a conversation between two old friends. This is also one of the few times in the issue that we catch a glimpse of humor as Jason taunts Oliver about “billionaire types.” Lobdell effectively uses these situations to allow the reader a chance to breathe in the midst of tense circumstances. In a quick turn of events, Essence, daughter of the All-Caste, arrives on the scene and immaculately heals Roy.

Meanwhile, Starfire battles internal struggles and seeks refuge in the form of drugs. Intended or not, Lobdell conveys a very powerful message about the utilization of substances in order to chase away personal sorrow and pain. Although initially chastised for her over-sexualized portrayal, Starfire is quickly becoming one of the most relatable members of The Outlaws. This is a drastically different Starfire than previous iterations, and I find it to be very relevant in the current DCU.

Starfire’s drug induced vision takes her to her home planet of Tamaran where she rests peacefully with her sister. This scene indicates that although Starfire blames her sister for selling her into slavery, she still yearns to be home with her family. This sequence further solidifies the notion that Starfire is currently battling demons in many varying aspects of her life.

With Roy being under the careful watch of Oliver, Jason Todd heads out in search of Starfire. However, with her whereabouts unknown, Jason seeks assistance from a most unlikely source, Crux. His parents killed by a falling Tamaranean spacecraft, Crux blames all the Tamaran people for his current situation. Furthermore, Crux is currently incarcerated in Arkham Asylum, placed there by Jason Todd. Bent on revenge, Crux gained a vast knowledge of Starfire and the people of Tamaran. Jason Todd hopes that this knowledge will assist him in finding Starfire. However, we will have to wait until next month to see if Crux is willing to help Jason locate the lost member of the Outlaws.

Intriguing storytelling and a thickening plot make this a solid entry into the Red Hood and the Outlaws series. The artwork was average with the exception of a few panels. Specifically, the color pallet used to materialize Tamaran was stunning. I look forward to the next entry in this series and hope to see Lobdell further explore the inner workings that make the Outlaws such a fascinating team.