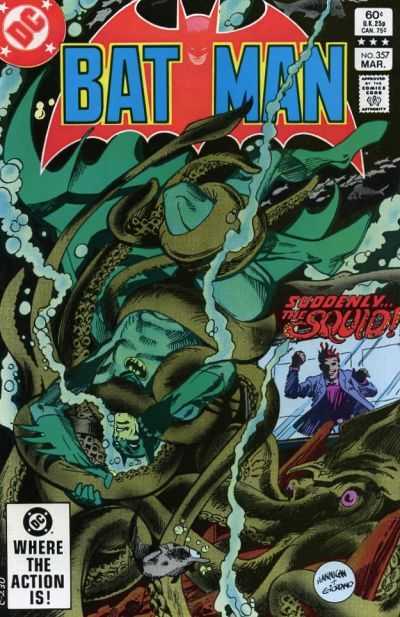 Synopsis:  Batman (the issue opens with a nice opening splash page depicting an enraged Batman looking at the reader, clenching fists and snarling "You Scum!") punches out the bodyguards of Lester, a new drug dealer setting up shop in Gotham now that Batman has jailed mobster Tony Falco.  Batman demands Lester give up the name of who sold him Gotham's drug franchise and a frightened Lester rats on someone who calls himself the Squid.  Meanwhile, the just reappointed Commissioner Gordon is getting a physical check-up under the eyes of Mayor Hamilton Hill and is told he has high blood pressure, will have to give up smoking and go on a salt-free diet.   As Gordon returns to his office, Batman enters through a window and tells Jim they have a problem.  Later, Falco lackey Joey "Numbers" Taylor is saved from a knife-wielding gang (who want Taylor's racket) on motorcycles by the Squid and his machine gun toting crew in exchange for his loyalty.  Back in Gordon's office, Batman tells Gordon that the Squid has come to Gotham for revenge in breaking up his spy ring and selling government secrets (back in Detective Comics #499).  Dick Grayson arrives at the circus to see a new aerialist act, the father/mother/son family team named Todd (including the unnamed Jason) while Killer Croc's man Sloan attempts to shake down the circus ringmaster for $10,000 in "protection" money.   At a rundown aquarium on the riverfront, the Squid holds a meeting with Gotham's mob and to prove he's fit for the takeover, he feeds the top north side man Eddie Colson to a giant squid.   After midnight, Batman meets with TV reporter Olivia Ortega where Batman hatches a plan to save Falco's life.  The next morning, Falco is sentenced to 18 years in prison; however, during transport, he is broken out of a paddy wagon by the Squid who spirits him to his hideout.   Once there, the Squid tells Falco to remove his disguise.  The imposter Falco reveals himself as really Batman; the Squid seeing through the ruse as the real Falco had bad breath and Batman did not.   Suddenly, Batman is surrounded by the Squid's lackeys and initially gets the upper hand, but is ultimately overwhelmed by the numbers and beaten unconscious; then the Squid gloats over him.   Arms now bound, Batman groggily stirs just before being thrown in the massive water tank to a waiting squid named Gertrude.   To be contined in —

Synopsis:  Batman struggles and splashes in the tank while entangled in the squid's tentacles as Killer Croc watches in the shadows.  While the Squid and the others evade splash overflow from the tank, Batman gets out of the tank and escapes through a window unobserved to all except by Croc who says nothing.   The Squid turns on more lights and goes to the tank for a closer look to find Batman has escaped.  The Squid sends everyone to go search for Batman, but Croc saunters away calling him a loser.  Riled, the Squid grabs Croc but releases him upon seeing a clear look at Croc's face.  Once outside, Croc instinctively turns to a rooftop and sees Batman observing him.   Batman is baffled that Croc isn't calling to the others that are searching for him as Croc turns and merely walks off in the fog.  At Wayne Manor, Dick is hosting a reception for the Todd family (all their first names given now; Joseph, Trina and of course, Jason) attended by many including Vicki Vale, Barbara Gordon and her father.   Dick notices a shaken Bruce enter and is told to summon Alfred to the parlor with a first aid kit.   While Alfred bandages Bruce's ribs, Bruce explains to Dick and Alfred what happened and how he escaped his bonds and karate-chopped the squid.   Just then, Trina Todd barges in to ask Dick for advice and sees Bruce's bandaged chest and him holding his Batman costume.  Dick urges Trina not to say anything and tells her to wait outside and the three of them conclude that Trina now knows Bruce is Batman.   Two hours later back at the riverfront aquarium, the Squid has reconvened a meeting.  Killer Croc goes to a nearby roof with a rifle and shoots through a window at the Squid.  The shot misses and Batman then bursts in from a window and fights the Squid.  The Squid seemingly manages to shoot Batman point blank in the chest, but it's revealed it is actually the Squid who has been shot and killed from a rifle shot fired by Killer Croc.   As the Squid's body is loaded into an ambulance, Batman and Commissioner Gordon wonder who shot him with Batman stating if they find Squid's killer, then their troubles will really begin.

Thoughts/opinion:     I chose these issues as a character named the Squid recently appeared in Detective Comics #30.  The new version appears to be a bit more imposing and menacing while the pre-New 52 version was portly, had a pink shirt and purple and black checkered pants, spiked hair to resemble tentacles, and spoke with an accent that came off sounding like Elmer Fudd.   The fate of the new Squid (and whether he encounters Killer Croc) remains to be seen.  Don Newton did the primary art on both issues and I thought his work was underrated; his style eventually grew on me from when he started on Batman.  He was a workhorse on Batman during this time period and has the distinction of being the first artist to draw Jason Todd.  Sadly, Newton would die of a heart attack at age 49 a year later.   Adrienne Roy did the colors and in some panels the contrasts of lights and darks are quite striking.   Conway's writing is fast-paced but still manages to include moments of the supporting cast like Jim Gordon.  I like that and I think those elements are missing from today's stories.  However, the ending was a bit confusing as to who was shot – Batman or the Squid.  Further, I thought it strange that Batman would work with a TV reporter.  I find it hard to think that Batman could go to someone in the media with confidence and confidentiality, at least by today's standards.  Worse, I cringed at Bruce's carelessness; leaving a parlor door unlocked and holding his costume while party guests were nearby.   Was the cave that far away, much less an upstairs bedroom?  While I love cliffhangers, this one came off as a bit weak from set-up to escape.  In my opinion,  Conway does make Croc a very intimidating and ominous presence here; he's intelligent, patient, calculating and he steals the story; that along with Newton's art offset the problems I had here.

Comments:   These issues are the 1st and 2nd historical appearances of Jason Todd; however he only appears in two panels in Batman #357 and one panel in Detective Comics #524 and has no dialogue in both issues.  Let that serve as a note to Jason Todd collectors and completists; his first appearance in comics was not an eventful one.  No, Jason doesn't steal the Batmobile's tires here; that happened in Batman #408 which would be a few years later in a retcon.

Batman #357 is the 2nd appearance of Killer Croc.

A character named Sid the Squid appeared on Batman: The Animated Series in an episode entitled "The Man Who Killed Batman."