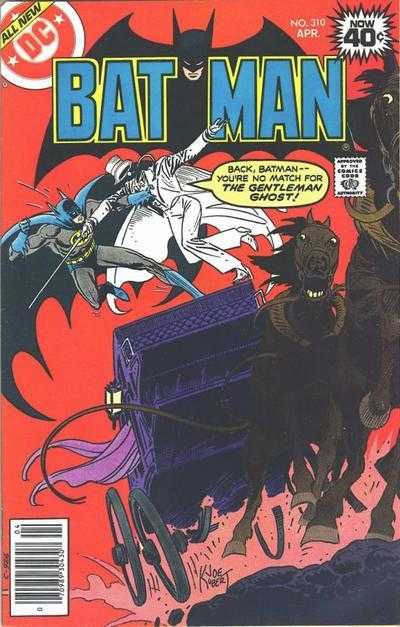 Synopsis:  “Cor! H’it’s th’ bloomin’ Batman!” exclaims one of a cockney trio of burglars looting the antiquities wing of Gotham City’s Riverside Museum as Batman swings down on them. The thieves arm themselves with a sword, battleaxe and mace, but Batman quickly overpowers them. The Gentleman Ghost then emerges and introduces himself stating he’s impressed by Batman’s skill. The Ghost fires a flintlock gun at Batman resulting in an exploding flash bullet which blinds Batman long enough for the foursome to escape and Batman vowing they will meet again. As Batman swings to Bruce Wayne’s penthouse, he recalls that the Gentleman Ghost, an old foe of Hawkman, claims to be the spirit of Gentleman Jim Craddock, an English Highwayman of the early 1800s and a notorious jewel thief, who also just netted a pair of solid gold lanterns that once hung in front of Wayne Manor. Changing from Batman, Bruce notices Alfred isn’t present but notes it’s his night off. The next morning, Bruce is awoken in bed by a phone call from Selina Kyle who asks for a dinner date for that night but has to settle for lunch date the next day. Bruce notices Alfred is still missing before he leaves to meet Lucius Fox who’s worried about Gregorian Falstaff. That night, searching for Alfred, Batman disguises himself (looking very much like how Alfred first appeared in comics from the golden age; balding and portly) and goes to Alfred’s favorite pub, Ye Pipe and Hearth, but can only confirm Alfred was there and nothing more. Batman returns to Bruce’s penthouse and finds Alfred has returned – but also that the Gentleman Ghost and his lackeys are also there and looting antiques. Batman makes quick work of the henchmen and seizes the Gentleman Ghost only to be struck on the head from behind by a lamp. Before losing consciousness, Batman turns and sees that he was struck by Alfred as the Gentleman Ghost laughs. Batman revives and deduces what happened to Alfred – he’s under a hypnotic spell, and where they are – Wayne Manor, and why Gentleman Ghost has been stealing Wayne items – to furnish in a style Ghost is accustomed to. At Wayne Manor, Gentleman Ghost recalls how he chanced to eavesdrop at Alfred’s pub, hear him speak of the manor, and how he managed to capture Alfred. Batman arrives and knocks the flintlock gun from Gentleman Ghost’s hand. Ghost orders Alfred to pick up the gun and shoot Batman, but Alfred can’t bring himself to do so and the hypnotic spell is broken. Gentleman Ghost flees atop a horse drawn carriage and Batman swings and lands on the carriage. A fight ensues and Batman leaps off just as the carriage is going over a cliff. Batman goes down to examine the wreckage and finds no trace of the Gentleman Ghost but can only hear Ghost’s laughter.

Synopsis:  Batman attempts to thwart Gentleman Ghost’s heist of industrial diamonds from a factory but the Ghost manages to suspend Batman from a winch hook and make a getaway with his men but not before Batman can ensnare the Ghost’s loot bag with a batarang and rope. In another part of Gotham, a police car transfering a prisoner has to stop to investigate a body on the road. Two officers examine the body which is actually a mannequin with the face of a clown. Gas emits from the clown’s mouth giving the officers Joker death-grins and two men emerge to take the cuffed prisoner away thinking he was going to squeal on the boss. The next evening at Wayne Manor, now reestablished as his primary residence, Bruce hosts a charity masquerade party with Selina Kyle (dressed as Catherine of Aragon) and Lucius Fox (dressed as Abraham Lincoln) in attendance. Alfred signals for Bruce who is informed the signal he left as a precaution at the factory has been tripped. Arriving at the factory, Batman makes short work of Ghost’s two henchmen. But Batman is tricked by a phony frame and microphone used by the Ghost and is clubbed by the Ghost’s cane. Batman awakens to find himself manacled over a vat of sulfuric acid and slowly lowered. The Ghost tells Batman that the noxious fumes may finish him off before he reaches the vat as Ghost and his men depart. Batman manages to swing himself clear of the vat, lower himself and break the manacles. At Wayne Manor, Selina asks Alfred where Bruce is – when suddenly, three Gentleman Ghosts appear to steal the collected jewels. Batman arrives and takes out two of the Ghosts who were henchmen in disguise and chases the Ghost on foot. Batman leaps to tackle the Ghost at the edge of a cliff. The Ghost dematerializes and Batman falls over the edge and manages to grab a jutting rock stopping his fall. When Batman climbs back up, he finds the hologram projector that lured him over the cliff edge. The Gentleman Ghost says Batman has won this round and swears he’ll return when Batman least expects it before vanishing before Batman’s eyes. Batman vows he’ll be waiting.

Thoughts/opinion: The Batman Eternal title has been reintroducing various Batman supporting characters and villains. A recent issue showed us the Gentleman Ghost and these two issues spotlighted here were the first two times he tangled with Batman with both times ending in a Ghost getaway. Both stories started and ended practically in the same fashion. Both stories gave us subplots that would be dealt with in future issues with Falstaff and the Joker. The first story tells us what Alfred does on a night off. In recent years, the notion of Alfred having a night off seems a bit unlikely. The ongoing appearances of Selina Kyle and the romance with her and Bruce Wayne was a highlight in the stories of this timeframe. The Gentleman Ghost makes a baffling villain; seeming to rely on humanistic, conventional means in one moment and then by supernatural means the next. Batman does not seem what to make of the Gentleman Ghost and can only confront him in hopes of stopping him from succeeding; there is no thought given into trying to actually capture him. Irv Novick ranks among my top five Batman artists and I think his work and contributions on Batman are overlooked. I enjoy the stern facial expressions he gave Batman and in contrast to the soft, playful expressions he depicted with Selina. I ranked the second issue a little higher as Batman had to contend with a deathtrap and I liked the cover a little bit more.

Comments: Fittingly, prolific comics legend Joe Kubert did the artwork on both covers. Kubert is credited as co-creating the Gentleman Ghost along with writer Bob Khanigher.