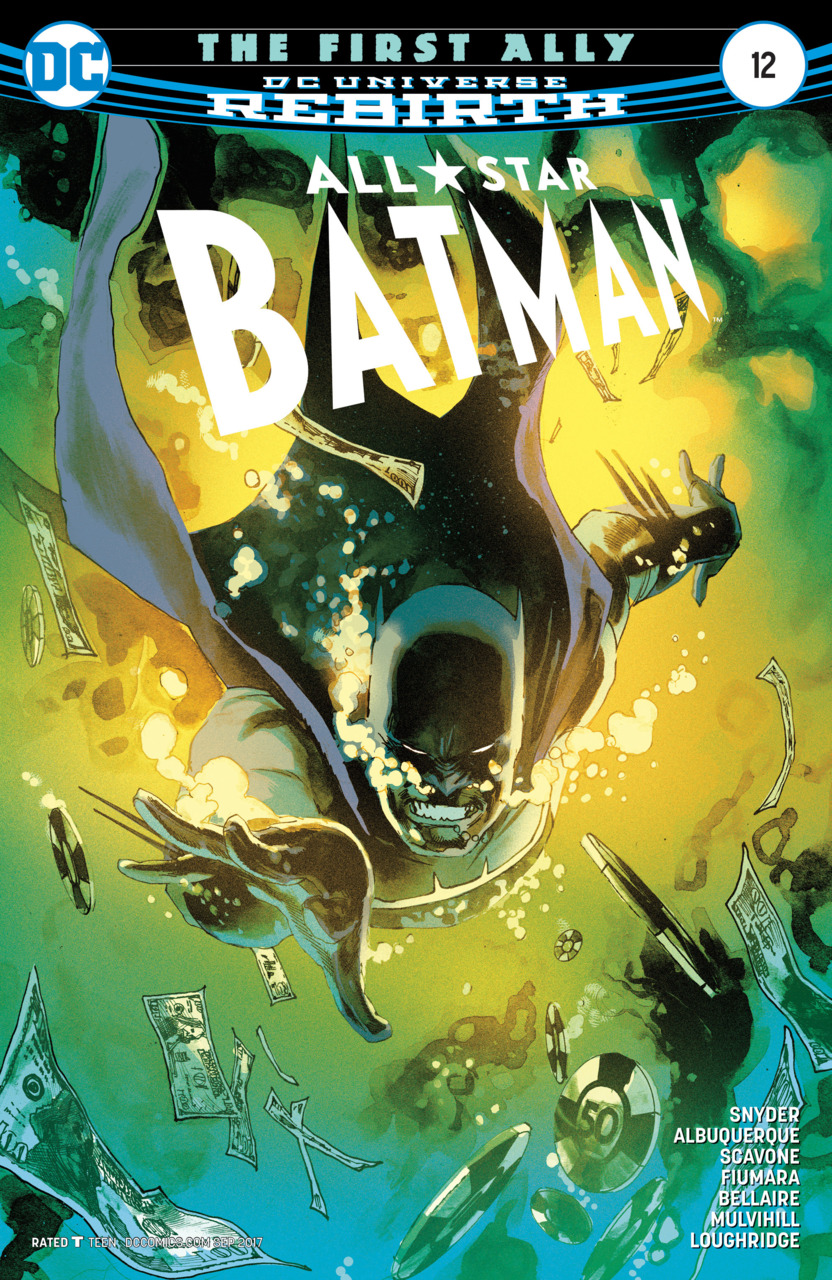 Short Story: Batman saves everyone in the submarine/casino, and then is ambushed by Penguin, Black Mask, Great White, and Hush as they get the better of him.

Synopsis (spoilers ahead): Alfred comes to inside a dungeon with his last memory being shot point blank in the head… He finds a dart lodged in his forehead. Briar is standing off to the other side of the room. He asks Alfred what that symbol was that he’d always paint on buildings when he was younger, but Alfred seems to get upset at this question and throws a punch. Briar counters and tells him that the dungeon they are in is underneath the London Tower called Traitor’s Gate. Briar tells him of a warrior who operated here one thousand years ago. A Dark Knight — and outsider, enemy of the crown, traitor, but secretly worked with the Kingdom and had no one except his squire. His symbol was an upside down crown… a crown of thorns. Thorns are also known as briars… this man’s code name. Alfred demands he let him go, and Briar tells him that nothing is stopping him. The dart placed a tracker in his bloodstream, so as long as he doesn’t tell anyone about this, they’ll leave him alone. As Alfred walks away, Briar says, “It’s a shattered clock, isn’t it?” Briar offers him to take the role of the Dark Knight, and he’d be his squire… his first ally.

Batman awakes and finds Tiger Shark laying on the floor, freaking out because he can see his heart as his chest is exposed. Batman covers it and asks him where the tow cables to the ship are. Tiger Shark tells him they were just for decoration–that they are going to die. Batman makes his way down and hooks the cables to some torpedoes. He asks Alfred for a favor–he asks him to scream, to give the torpedoes something to lock on to. He does so, and this causes the submarine to be pulled back up to the surface by the torpedoes. Batman passes out from the blood loss, and begins to sink down into the ocean, when some of the women who were mermaid props on the ship rescue him from the water.

Back inside a still-being-constructed Wayne Hotel, Alfred is stitching up Bruce as he talks about a scare Bruce for when he was eight years old. Alfred sees it as he is stitching him up now, and it brings back memories. Bruce wakes up and tells Alfred that he got the Genesis Engine before the explosion went off. Alfred is relieved, thinking they can go home now. But Bruce feels the responsibility to stop this Knight, but Alfred is scared for Bruce’s life as he knows what he’s going against. As the two talk, a helicopter shows up and shoots into their room… it’s Penguin, Black Mask, and White. Batman shields Alfred from the brunt of the attack, but Alfred is shot in the arm. When Batman goes to check on him, he’s hit from behind by Hush. Tommy takes Batman’s belt, removes the Genesis Engine, and drops the belt from the building while pocketing the Engine. He steps onto the helicopter and they fly away just before causing the nearby cranes to start smashing into the hotel.

Analysis: Scott Snyder slows things down here, and you can feel it. We dive deeper into Alfred’s past, which I love, but doesn’t show us as much as I would like. Maybe we’ll get this later, but I want to see Alfred kicking some butt, and I fear we are running out of pages to see that. Ian and I had a small conversation about this, but Snyder contradicts himself in this book. In Batman #51, Alfred tells Bruce how the Dionesium healed his body to the point of it being brand new. All the scars and physical trauma his body endured over his entire lifespan had been reset… Here, he talks about a scar Bruce got when he was eight and how it’s still there… So either Snyder is teasing something to come that is happening to Bruce (which I doubt), or Snyder forgot that plot point that he wrote. Now, I’m not going to rag on the guy too much here, but that was a bit sloppy if it was a mess up. If it was intentional, then I’ll eat my words, but right now that just doesn’t look good. I’m still enjoying this story, and if that’s my only complaint… Well, I’ve reviewed much worse comics before.

Rafael Albuquerque’s art is just amazing. I probably haven’t brought this up before, but I hate double page spreads. Some of that is probably because I usually read it digitally, but it doesn’t translate well. I also feel like it is a cheap way for the artist to make some extra money while at the same time cheating us on a page of story. Albuquerque doesn’t do that. He gives us a beautiful full single page for us to feast our eyes on. His storytelling is always so good, and I feel like his pencils where a little tighter here. There was more variety in his faces, which if I had to pick a weakness of his, it’s that he has some default faces. This is some of his best work.

Jordie Bellaire has some gorgeous pages here. I feel like her work took a step back inside the casino, but inside the engine room, underwater, and the Miami night skyline were absolutely amazing. She can make a page look better using only one or two colors than most can make it look using as many as they want. Her color choices, as well as their placement are just top notch. Steve Wands remains impressive. In all my years reviewing his books, I have yet to find a letter box out of place. His placement always leads your eye to the perfect spot on the page.

Rafael Albuquerque, Rafael Scavone, Sebastian Fiumara, Trish Mulvihill, and Lee Loughridge are killing it in the backup story, which I’ll dig into a little deeper when this story is all wrapped up. But it’s well paced, has excellent art and beautiful colors. At this point in my comic reading life, I don’t see the point in backup stories. I feel like they’d always be better suited as a one-shot story in between arcs, giving the normal team a break and giving us a complete story at once that we can tell if we like right away.

Overall: Not a perfect issue, but everyone involved did a solid job. We are have past the halfway mark, and things should be ramping up… I just hope we aren’t an issue too late.