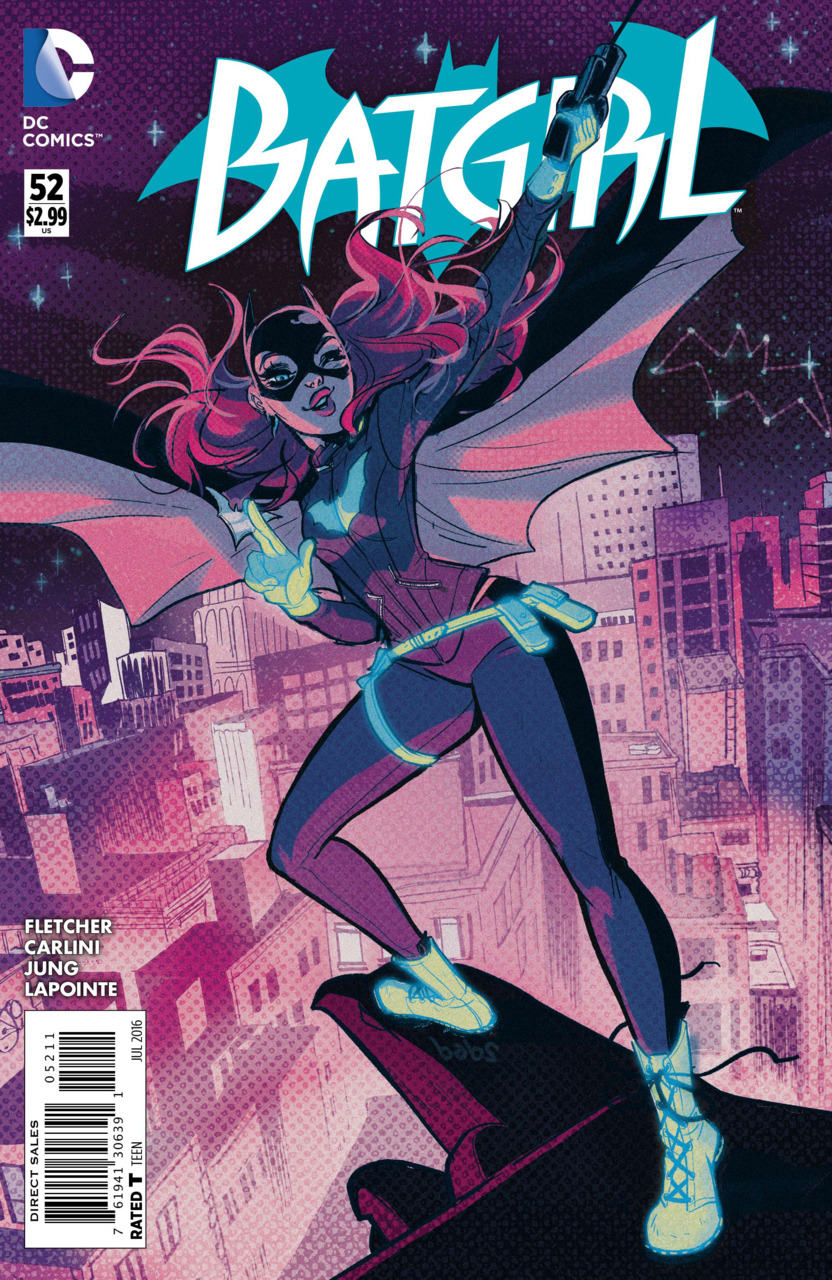 THE PLOT: Team Batgirl teams up with Olive Silverlock and Maps Mizoguchi to take down Gladius once and for all.

MY THOUGHTS: This issue is a harmless read, producing a mediocre end to the two-part and an overall letdown for the Burnside Batgirl series.

The villain’s plot isn’t terribly interesting. Pretty much all of Batgirl’s best villains appeared in the lead-up to issue #50. In comparison, Gladius almost puts you to sleep. Involvement with the Gotham Academy heroes feels contrived, and Maps and Olive do little aside from being hostages.

The artwork is a weak follow-up to Babs Tarr. I might tend to complain whenever Tarr’s not on the book, but it’s what the run was mostly sold on and as a final issue it’s nothing short of disappointing to see not only her not draw it but a lesser artist work in her place. I know Tarr’s working on Motorcrush, but it still stink she couldn’t stay on for the final issue. But that’s the thing, isn’t it? Issue #50 was supposed to be the last before the order to reach fifty-two issues was dictated by DC. For some books it worked, but for this it just drags out the world of Burnside from a promising send-off to a disheartening finale. A lot of things start happening for the needs of the company in relation to where they’re putting the character. As a result, none of the goodbyes feel emotional enough to matter, especially for characters like Nadimah and Qadir, who were really fun in their initial appearances but fell by the wayside in the last several months. There’s also the inclusion of Vixen, who I assume would’ve been added to team Batgirl had the Burnside crew kept going, but randomly appears in these issues and knows Batgirl’s identity.

It’s really disappointing, but like my thoughts on issue #50, perhaps my let-down feelings are compacted by the fact that I’m really missing the Burnside Batgirl still. It wasn’t perfect, but it had a strong identity and became a more than suitable status quo for Batgirl as a character to reside in.

Barbara Gordon’s going to move on, with another version of the Birds of Prey whilst traveling across Asia. During this she may regain memories of her previous life as Oracle depending on how DC Rebirth turns out. I’m still going to be checking out her travels in at least the first couple of issues depending on how good the books are. She’s still not my favorite Batgirl despite her being in a fun title for the past two years, but she’s such a big character I can’t help but be moderately curious in seeing where she goes. She also seems to be staying away from the Bat-Family continuously, as she’s not in the line-up for Detective Comics and won’t be interacting with Stephanie Brown and Cassandra Cain. But again, let’s see how Rebirth addresses those relationships.

My final thoughts on the issue are the same as my first words on it. The series as a whole was an angel’s grasp pulling us away from the dreck that was Simone’s editorially dictated run. It’s always going to be one of the most drastic quality changes in a comic series’ life for me. But beyond the outside shenanigans, Burnside Batgirl was a reliably fun, engaging, beautifully drawn read with characters whose lifespans were cut down way too quickly.

But, as the caption boxes at the end of DC Rebirth read…”Nothing ever ends…”