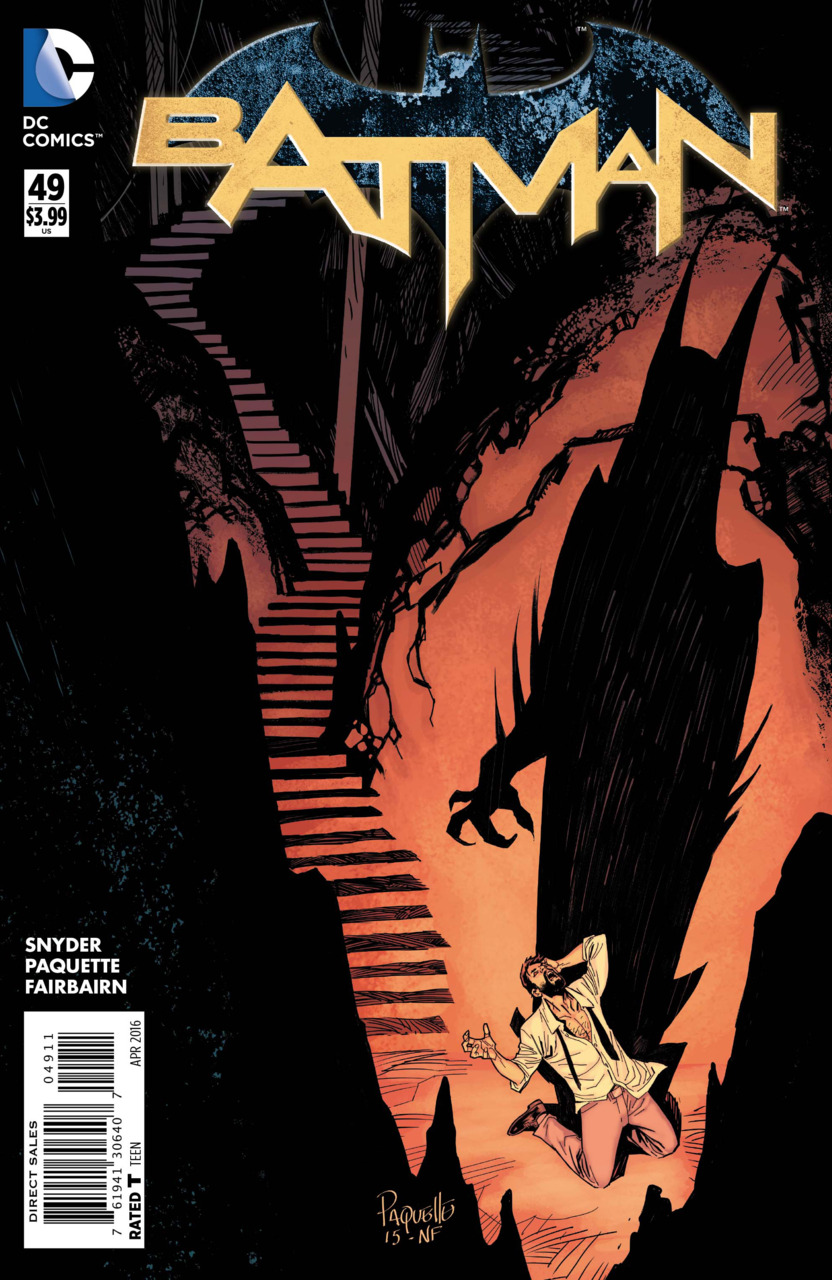 Breakdown: Scott Snyder and James Tynion IV work together this issue to deliver a complex story that works as a one-shot, honors what Snyder has built, and launches Superheavy into act three all at the same time. Now, DC didn’t credit Tynion on the cover, but they did inside the book… Why they did that, I don’t know, but I’d be irritated about that. If the guy helped make this comic, he needs his due. Now back to the actual story; the issue delves into the mind and heart of Bruce Wayne. Now I love it when Snyder does this, as they tend to be the standout issues of the story, and he always nails what drives Bruce, and yet the conflict that tears him in-two. Here, we get two story-lines that seem kind of confusing at first, but converge in the end, and gives you a moment that tears your heart out… I won’t get into details until we get into the spoilerish point in the review, but this is definitely one of those comics that gets better each time you read it.

Yanick Paquette is as sharp as ever here. I’ve seen his work before, and I thought he was alright… That was long before I was doing reviews. Reviewing his work opens your eyes to the amount of detail in his work. The panels, their shape, and the way they are laid out all add to this incredibly complex story. I remember in his Swamp Thing, he had this impeccable amount of detail in the panel grid that added to the atmosphere, as well as to the story itself… He , does the same here, but in an almost disguised way. His action is great, his emotion and facial expressions are on point, , he packs each page with an abundance of panels, and his storytelling process is top notch. I also love Yanick Paquette inking Yanick Paquette… It just looks better than it does when someone else does it.

Nathan Fairbairn’s colors are beautiful. They have a soft vibrancy, integrated with this felt-like grain that gives it the versatility to go from bright daylight to grim night without drastically changing the color tone, but allowing the different pallets to breathe, and yet they work together like a charm.

Steve Wands continues to prove to me that he’s the best letterist in the business. With Yanick Paquette’s panels, would be easy to put a bubble just a little off it’s place, and completely mess up the reader as to what order things should be read in… But he never slips up, and that’s impressive.

Recommendation: People who miss Bruce, this is the issue to jump back in on, as the entire creative team deliver to you a love letter to Bruce Wayne.

Synopsis: This issue would be confusing to recap, so I’m going to split it up into the two story threads throughout this issue, so that you can walk away from this actually understanding what is going on.

We pick up from the end of last issue with Bruce demanding Alfred take him to the cave. As he does this, he notices Alfred is blocking him from the grandfather clock, which he had been suspicious of last time he was at the manor. Alfred begs him not to go, and falls to his knees in agony when Bruce acknowledges that he is Batman. Bruce makes his way into the cave, looking for anything to help him regain his memory — to make him who he was before.

They make their way to the cloning device that has been brought up multiple times throughout Snyder’s stories, but Alfred tells him that he destroyed it. When Bruce still seems determined to use it, Alfred lets him know that it never worked. They were able to clone Bruce just fine, but the mind-replication process always left the clone with brain damage. Bruce straps in to the machine and begins to wonder if something new can be created. If he can be a happy Bruce Wayne with a family and help the city as his parents did, and also be Batman to protect the city as it’s guardian… And it’s with that, where this secondary story comes in…

Mayor Bruce Wayne is consulting with his fellow court members about how they should help the city — The Court of Owls, that is. Bruce decides that they can’t wait any longer, and that action is needed. He rushes outside of Wayne Manor, onto the front lawn… The manor is on the rooftop of Wayne Tower. Bruce stands on the giant face of a clock, and is lowered down to his Batcave, where many employees are working on various projects, including a Mr. Chill, who seems to be Bruce’s right-hand man. Bruce suits up in a primarily white costume, as Julie and their baby come to see him off. He takes off on a flying cycle of some sort, only to be killed by a giant monster that has ripped through the city skyline, as Julie watches in horror. This is when the proceeding pages, as well as the confusing first page come into play; as we see various scenarios of various Batmen across many different possible timelines — all die.

Alfred can’t bring himself to risk Bruce’s life, but Bruce wants to push further. He believes that in order for the mind-replication process to work, they have to push past the point of brain death. Julie walks into the cave, saying she has always known that Bruce was Batman, and — after she and Bruce tell each say “I love you” — Julie presses the button.

Alfred tries to update Bruce on the current events, but Bruce tells him to “Save it for the car.”

Closing Thoughts: Seeing Bruce being hopeful that he could somehow have the happy life he’s always wanted, and still be effective as Batman, only for that hope to be ripped away was heartbreaking. Seeing Alfred’s worst fears come to life, as well as Julie being the one to let Bruce go for the sake of the city were both very emotional moments as well. It blows me away how these guys can get right to the heart of a character so well known, and make you care of a completely different level. Many have been waiting for this moment for almost a year… And it makes you feel like a horrible person for wanting such a thing after seeing what is taken from him, but…