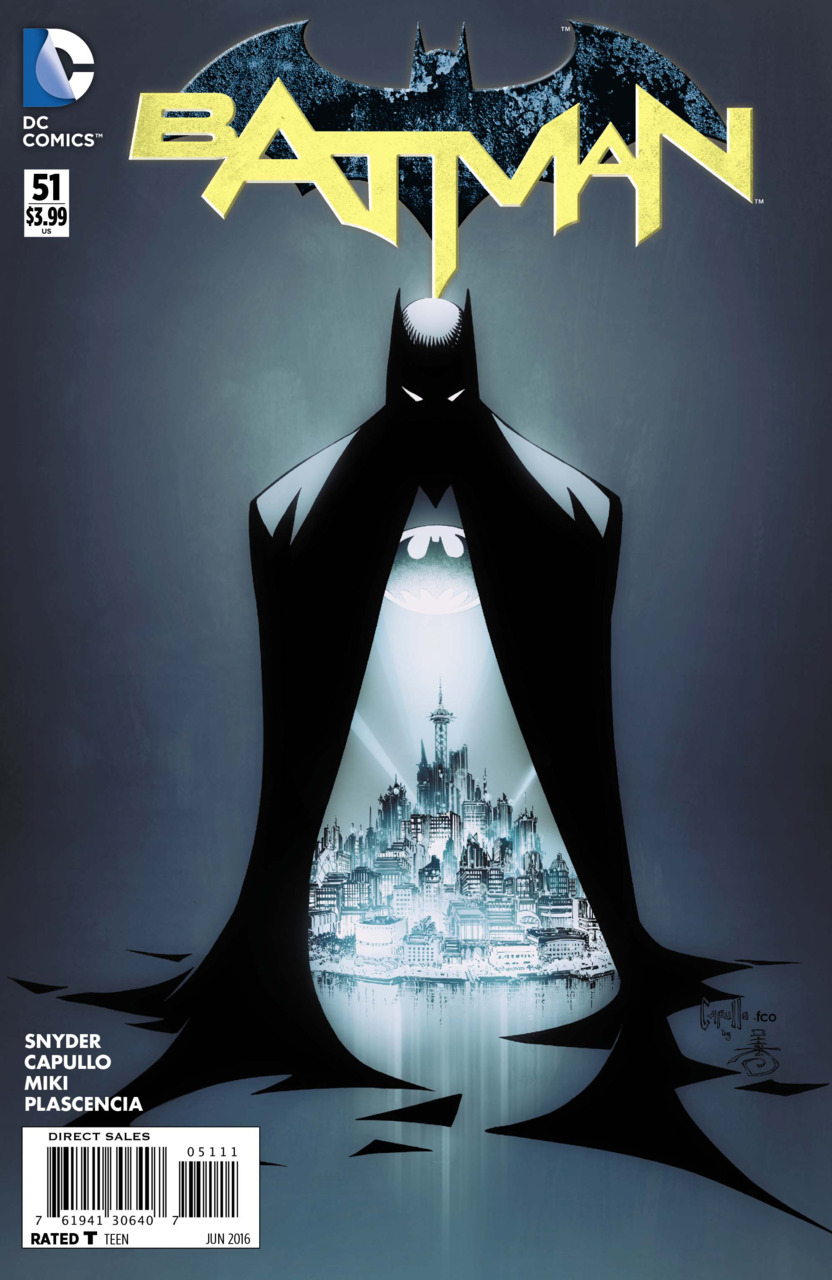 Breakdown: Scott Snyder set the tone for this issue, that being a love letter to Batman. The magic of it all being that it’s so simple in it’s presentation, that we get some time to reflect on what Batman means to Gotham. Snyder reconnects the ending of his run to the beginning of it in a poetic way, giving Bruce a rare happy ending. The only thing that prevented this story from being perfect was that it got a bit distracted with itself, not giving us the emotional drive that this story was riding on.

Greg Capullo gets to flex all his muscles in this issues. There is an array of emotions taking place throughout this issue, and Capullo gets to do the amazing acting he does so well. He and Snyder play with a bit of symbolism in several moments throughout this issue, which added another layer to it all. I really hope this isn’t the last time we see Greg on a Bat-title, the guy does some of the most amazing work I’ve seen… Plus the new design on the batsuit is really growing on me.

Danny Miki’s inks on Capullo’s pencils look freaking amazing. He does a fantastic job of knowing when to add texture to a page, and when not to. He’s a master of of luring your eye where he needs it to be. FCO Plascencia goes back to his early days of this series. His colors aren’t as bright and crazy as usual, but that doesn’t make them any less amazing. He knows what book he’s on, leaving much of the book drenched in black. Steve Wands does an amazing job with his lettering, as usual. His placement never leaves you wondering where to go next, and the font he uses plays a part in the storytelling.

Recommendation: If you are just now getting into Batman, go back and buy this whole run… Seriously, go do it.

Synopsis: Starting from the beginning, and carrying throughout, we see caption coming from the Gotham Gazette… It’s the “Gotham Is…” article. Alfred is walking down into the Batcave, bringing Bruce his “justice flavored” protein shake, thanks to his hand being re-attached because… well comics. Bruce is suiting up, when Alfred notices that his back doesn’t have any scars on it, and hates that Bruce is going to go through all this over again.

Batman goes through several different cloaks on the batmobile, before deciding to not cloak it at all. On his way into the city, as he goes on patrol, there is an earthquake along with power outages. Bruce immediately starts searching the city for the cause of the event.

He meets with Gordon, but he knows nothing, and then he disappears on him. Batman goes to Arkham to keep all the criminals at bay (calling back to issue #1), but a new security feature keeps them from becoming an issue.

Bruce disguises himself as a lady (reminded me of The Dark Knight Returns), and infiltrates the Court of Owls, but realizes they aren’t behind the event either.

Penguin, Black Mask, and Great White Shark are planning, but they won’t attack yet… It’s not time. Joker is also holding back his inner demons, as he swats away some mosquitoes (there has been a lot of symbolism with Joker and bugs throughout Snyder and Capullo’s run… that could be a whole article by itself, so I won’t get into that here).

Batman seems to have spotted some trouble in the Gotham Gazette, but it was an employee. He used to be a gang member Batman fought in the Court of Owls story-line, but he now writes the “Gotham Is…” section. He thanks Batman for changing his life.

Bruce looks around the city, but nothing bad is taking place… Everyone is watching out for one another. Batman watches from a gargoyle, as the sun rises, and the power comes back to the city that finally loves him back.

Closing Thoughts: Throughout the fall of 2012, I had discovered podcasts… The Batman Universe was the one I binged, and in just a few months (thanks to Dustin, Stella, and Donovan), was up to date on the New 52 Batman. After a childhood full of reading Calvin and Hobbs, and getting a regular dose of DC animated TV shows – along with a case of some old/weird Amalgam Universe stuff my cousin had – Snyder and Capullo’s run on Batman had me hooked. What I’m saying is… this is the one that started it all for me… this series got me into comics. I love what these guys have had to say about Bruce, and this will be a series I will be reading again and again. It will also be a series I will be recommending to my friends.