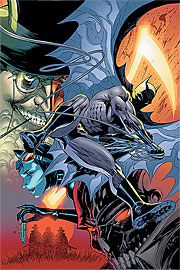 Tony Daniel returns to right a ship that has gone way off course. The most important title in comics has been a weak imitation of its former self since Judd Winick took over the helm. Acclaimed more for his art than his prose, the creative mind behind Battle for the Cowl takes over both duties as he resumes his interpretation of Dick Grayson’s Batman.

I’m not much of a Tony Daniel fan, and to be honest was expecting to be writing some scathing words of disapproval at this point of the review. But you know what; Batman #692 was pretty darn good. The story is ambitious as it introduces multiple storylines; including the reemergence of the Falcone family, Hugo Strange, Dr. Death, Fright and Catwoman. Black Mask still is the preeminent bad guy, but Daniel lays the framework for some very interesting future character development. The most interesting to me was the reintroduction of Dr. Gruener, the original Reaper, as a villain for the next or an upcoming issue. This is not the Reaper from Batman Year Two, but the pre-crisis version created by Denis O’Neil. If you have access to back issues, check out Batman #237 from December 1971. Horrifically traumatized by Nazis in a WWII concentration camp, Dr. Gruener is poised to become The Reaper once again. Selina Kyle is also nicely portrayed, in particular the chemistry she has with Dick. I think Catwoman is going to have a prominent role to play in Daniel’s story arc. Not only because of her relationships with the past and present Batmen, but with what may turn out to be a very interesting sub-plot between her and the young Katrina Falcone. You’ll see why when you read the issue.

The dialogue gets jumbled and confusing at some points, but considering the scope of story Daniel seems to want to tell, the quality of writing is pretty good.

The most telling attribute that marks the incredible difference between Winick and Bagley’s Batman and this one, is the return to a darker tone. No more smiles, no more posing for the camera, no more bright colors. This Batman is The Dark Knight! Dick is methodical, sure of himself and driven. He is however still Dick Grayson. When he wants to take crime scene evidence back to his lab to study it, he asks Commissioner Gordon for permission. Gordon slyly replies, “Batman doesn’t need to ask my permission.” He does however have a definite mature sense of confidence that he didn’t show in previous issues; as Dick when negotiating with Selina, and as Batman when confronting the Falcones.

As it should from a talent that made his name as a graphic artist, the art is what really sets this book apart from its previous arc. Right from the first page we are given a visual interpretation of the character that really would drive fear into the hearts and mind of any criminal. The dark grey coloring of Batman’s costume really works, and the detailed facials under the mask let us know that this is still Dick Grayson. Setting Batman’s scenes outdoors in a dreary swamp and dark field reminded me of Neil Adams' work in the 70’s. Batman is drawn piercingly fierce. Daniel’s artistic style is a refreshing return to Batman’s roots. Selina Kyle is also drawn spectacularly well and interestingly so is Katrina. And while Black Mask’s new look is a bit Star Warsy, it’s still pretty cool. There are a couple of lazy panels, but compared to Mark Bagley…well there is actually nothing to compare. Tony Daniel is in a different league.

One interesting note is that Penguin appears on the cover but not in the book. He doesn’t seem to part of this story arc either. I wonder if this is an editing mistake or a clue to something yet to come.

Batman the comic is back on track. One issue isn’t going to make me forget the past five, but if Tony Daniel is going to give us this type of work it will be one hell of ride!