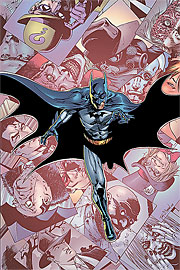 Picking up where 692 left off, Daniel continues the “Life After Death” arc with Batman and Robin fighting against “False Faces” outside a hospital by the Pullman district.

After a brief fight, we then get to see Dick Grayson in Bruce Wayne’s socialite world in this particular affair, being a function for the new Arkham. There he hobnobs with the usual suspects, and The Huntress, in her secret ID of course, shows up to help Dick keep a watchful eye on an attending Tommy Elliott, as Bruce of course.

The Riddler also manages to get involved as he is at the same function and interrupts a conversation Tomuce is having with an Arkham doctor, which gets the attention of Dick and Helen.

Huntress is then told by Oracle to go after a young girl named Kitrina, but gets caught in a bomb explosion! She manages to survive and goes out to pursue to girl.
Going back into the night, Batman meets up with Gordon and Bullock after it appears a St. Valentine’s Day Massacre took out about 16 or so of Falcone’s men. Batman then surmises from the way the murders too place that Black Mask must have brought in The Reaper to do the deed.

Batman then heads towards “Devil’s Square” in something looking like the Nolan-verse sonar suit to get info the usual way, and the issue ends as someone he is pumping for information gets shot in the back, and dies in Batman’s arms.

A good tale, nice to see more elements of the Batman “network” come into play with Oracle and The Huntress, and Dick being more Bruce like in this issue; with the detective work at the harbor, and his trying to fit into the socialite crowd.

The art by Daniel is good, and I really like the suit Dick goes out in during the last couple of pages. Could we possibly be seeing a hint of what Dick will evolve into when Bruce takes back the cowl?

There also is a nice scene in Wayne Tower which helps underscore the fact that Dick is clearly not in his element. Alfred wakes him up to get ready for the function. In a scene that is much like Batman Begins’ “BATS ARE NOCTURNAL” scene, Dick’s cape is scene strewn on his floor as he is asleep in bed.