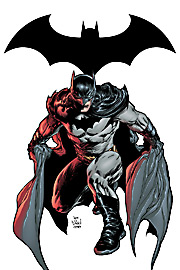 Tony Daniel continues his “Beholder” story arc in Batman #706 and the cast and characters populating this book seemingly get larger and larger by the issue. Back in the day there were TV shows like the Love Boat or Hollywood Squares that would draw in “celebrities” from the four corners of the globe to spice up every episode. There were even movies like “The Towering Inferno” and “Airport” or “Earthquake” that starred a cast of thousands and everybody had to see them.

Seemingly, Tony Daniel has been inspired by this approach and the “more the merrier” is the catch phrase of the day. Not that there is anything wrong with this. In fact, I think it is working out quite well and gives the book a good dose of energy that never lets up from page to page.

Even Robin has noticed how the cast of characters has grown exponentially. As he swings into action to rescue the outnumbered Batman he says, “So what’s with all the costumed females in Gotham these days?”

Which brings me to an “out of left field” prediction, Tam Fox slipping into a cape and tights to become Red Robin’s sidekick? Sound crazy? Why not, everyone else has one these days. Then again I thought the New England Patriots were going to win the Super Bowl this year so what do I know.

So let’s get back to the story and our cast of thousands as they pursue the “Beholder”. The Beholder is this story lines’ “McGuffin” and a McGuffin is a device that catches a viewers or readers attention and drives the plot along. Will the “Beholder” be of any significance going forward? I’d say probably not but who cares. It was enough to attract Catwoman for two frames as she orders her protégé, “Catgirl” to shape up and help the Dick Grayson Batman in pursuit of this mystery.

Catgirl dutifully followers her orders and swings into action with Batman. This is wonderfully illustrated by Daniel (around page 18) in a full page spread only surpassed by Batman and “Peacock” swinging into action in Batman #705 in a two page splash. Daniel is the master of such dynamic scenes.

Catgirl leads Batman to Chinatown where she has been doing a little stakeout work of her own and Batman deduces the butcher shop located there is the focal point of all the action. Batman orders Catgirl away and proceeds on his own. After all the title of this book is “Batman” that’s singular people and this is his fight. There is no need for this Gotham City’s version of “Jersey Shore” to accompany Batman into this heart of darkness as he works better alone and would rather not endanger friend or foe alike.

As the issue closes Batman is ambushed by Sensei and it looks like despite the cast of thousands the ensuing fight will be, mano y mano. I’m anxious to see if Tony Daniel will let these two combatants fight it out alone in issue #707 that follows. Or will he bring in everyone back and return to the dynamic that has served this story arc so well? Either way it promises to be pretty exciting.

My rating for this issue leaves room for higher scores as Tony Daniel seems to know what he is doing. Besides there is no further need to tick Daniel off by comparing “Catgirl” or “Enigma” to “Snooki” and getting an unpleasant package at my door.