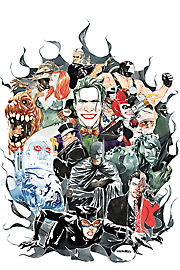 This comic certainly lives up to its name. Out of the 80 pages only a handful are taken up by ads or previews, so there is a lot for fans to dig into. And with a long comic comes a long review, I’m going to look at each of this year’s stories individually. I’m also going to give each story its own batarang rating, with the final score being their average. Before starting the review proper, kudos to Dustin Nguyen and his contribution as cover artist. I especially like his very clean take on the Joker (I’m a little tired of the Glasgow Grin version). His almost normal appearance adds an extra level of menace to his smile. And considering how most of this issue is dominated by Batman’s Rogues Gallery, it’s fitting that the villains take center stage on the cover.

This story is a rare look through the Joker’s eyes as he endures the state’s latest attempt at treatment. Not surprisingly, the results are disastrous. This was a fun story to read, but looking back on it there are some problems. Peter Miriani’s attempt to be clever by starting with the end of the story and then flashing back to the beginning backfires pretty badly for him. Seeing the results of the Joker’s latest outburst pulls a lot of the punch out of his final “joke”. And the Joker’s dialogue loses a lot of its polish towards the end of the story; it stops being irreverent and becomes too manic. Szymon Kudranski’s art maintains a healthy noir sensibility throughout the story and gives Arkham the appropriate level of dread. On the whole, a fun but flawed entry.

“May I have this Dancer?”

This is the best story of the issue, hands down. The Riddler makes a temporary return to crime as he tries to make off with a priceless, and heavily guarded, Degas statue. He proves to be a charming narrator, even as the progress of his attempted heist goes from bad to worst at hilarious speed. Matthew Manning’s writing is fun without being cartoonish, and Ryan Kelly breaths life into each of the Riddler’s imagined attempts at stealing the priceless artwork. With a cameo from Catwoman and an imaginary, rampaging Batman what more is there to ask for?

This is the most surprising story in this issue; it actually makes a compelling character out of Calendar Man. While his recent appearances give him a Hannibal Lector flair, Matthew Manning plays Calendar Man’s obsession with dates as an actual, compulsive disorder. The results are very effective and remove the campiness from the character. Garry Brown and Livesay do well on art duties. I especially appreciate them not copping out on the time elapsed sequence at the beginning of the story and actually drawing each unique panel. No copy and paste for them. This story also deserves bonus points for a shout out to the Sandman’s infamous Cereal Convention story with an appearance by Funland (the big guy with the pointy-ear hat).

This story stands out as the only attempt at horror in the issue. Sadly, any suspense is undercut by the story’s predictable outcome. I mean, a crocodile hunt in the Gotham City sewers? You know how this is going to end. Still, I give Mandy McMurray credit for trying. In another story where the audience doesn’t already know the villain this might have worked better. Kudos to Matt Southworth’s art style, which feels like an old-school horror comic. Though I would have liked to see a little more gore, and I’m not crazy about his decision to show Killer Croc with a fully developed animal head. Not a bad story, but not the best.

This is one of the stranger entries in the batch. An exploration of the Scarecrow’s unique methods of “therapy”, this story makes more sense on the second read. John Stanisci crafts a complicated narrative, caught between the Scarecrow’s narration and Batman’s drug induced nightmare. Sadly, Stanisci’s contributions as artist undercut his own writing. Stories like these benefit from clean, crisp artwork. It helps bring the bizarre elements into focus. But the art in this story is very rough, and it seems like Stanisci has a hard time drawing Bruce Wayne’s face consistently. Still, he does craft some very powerful images, especially the electric chair scene. This is another interesting, but flawed, piece.

This is the weakest story of the issue. Sean Ryan works very hard to create a symmetrical narrative to show the duality of Bruce Wayne's life, but the cheapness of Joe Suitor’s art undoes his efforts. Minimal backgrounds, weak character designs, and abysmal color work makes this an ugly piece to read. Plus the story lacks any real meat to it. Batman’s double life has been done before, and this just feels like a joyless rehash of the idea. Still, it gets points for its construction and for not being too painful to get through.

“Within the Walls of Dis”

This is a strange, strange story. Humpty Dumpty’s Birthday party turns into a complicated and bizarre version of psychological tug of war between the Joker and Two Face. I have to give Brad Desnoyer credit, I never would have seen this one coming, but it’s weird to watch super villains play therapist with each other. It’s also hard to believe to believe the Joker’s motivation, there’s something too purposeful to it. Even when the Joker has an agenda it feels like he could change direction at any moment. But this time it just doesn’t feel right. Lee Ferguson and Marc Deering deserve credit for their expressive character design and clean line work. These villains may be acting out of character, but they at least show a lot of range and emotion.

Not a bad issue, but still pricey ($5.99) as far as one shots go. If you can budget it into your pull list, I’d say go for it. There are some great stories in here, and most of the weaker ones still have something to offer. So with all the scores taken into account, this issue rounds down to: