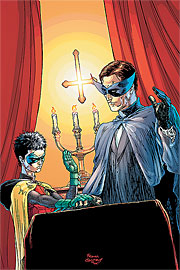 Being distant and vague can be a very frustrating thing. So frustrating in fact that I find myself not caring about what it is that your trying to get across. And while Morrison does bring his story back to level ground I can’t help but feel that he’s trying too hard to be outlandish and crazy which ends up coming off as too much. That’s not to say this issue is bad because it is really good, but I’m sure I don’t have to tell you that if you’ve been reading Batman & Robin for the past couple months. This issue for me was too far out and unreachable although it did, in the long run, deliver it’s content. But reading through it the first time it felt like I was reading a comic written by a madman. Albeit, Morrison does have a sense of madness to his work, and I should expect it. But he over does it and it ends up being confusing and uninteresting to say the least. That’s not to say, though, that the story isn’t very good. It is excellent, it’s all the fluff and flair that surrounds it that makes it an agonizing read. If Morrison had gotten rid of some of that stuff and focused more on the story I think it would have been a more pleasing read.

Our story starts with the Joker dancing with a skeleton corpse cracking jokes and such when he jumps onto a casket which he has put Robin in. He lets Robin go and Robin saves Gordon from Professor Pyg. Pyg runs off and sends his thugs after Robin who they quickly take care of. Robin is taken into a room where we see Batman on his knees. Dr. Hurt posing as Thomas Wayne goes to Wayne Manor and is welcomed by Alfred. Recalling a page in the first issue, Hurt shoots Dick in the head, but it is revealed that it is only a .32 pellet that is strategically placed to induce a hematoma if Dick isn’t operated on in less than 12 hours. Hurt offers up his medical experience in exchange for Robin participating in some sort of ritual to summon Barbatos. To begin his ritual, Hurt places his hand on the box with the Bat-symbol that is common place in The Return of Bruce Wayne mini series. Hurt opens the box only to reveal that someone has duped him placing a toy batarang in it with a note that says “Gotcha” on it. The last page of the issue reveals that Bruce is back and that he has been watching Hurt.

You see, if the story were put that way it would be a very short story and people would be wholly unsatisfied. So maybe you need the fluff and flair and maybe you need these rambunctious ramblings about banana’s and old forgotten Gods to cover up where your weakness is exposed. But at the end of the day after all that stuff is removed, what do you have? Do you have a viable story which you could present? Do you have material that will intrigue and interest your audience? Do you end it with anticipation? And does it serve itself and it’s reader with a satisfying wholeness?

For the most part, yes, it does. I can’t really complain about Morrison’s weaving of events. Obviously the story ends itself with an exciting sort of anticipation for things to come as well as the story is really short. I like the fact that Morrison pulls out all the twists and turns rather than rely on the foreshadowing that he had set up in the first issue of this arc. He creates new ideas and it moves the story forward, although it is not very smooth. I also like the way he wrote Damian, he has personality and a hint of his Father’s attitude in him, he is also distinct in the sense that he has his own voice which has a certain mood to it. Dick only plays a small part in this issue and when he does appear, besides the fact that he is shot in the head and he reveals Bruce in the shadows, he doesn’t really have a part here. It is mostly centered around Damian. And that isn’t such a bad thing because Morrison’s Batman in this arc isn’t as strong as it it/was in other story arc’s/books. The increase of Damian and the minimizing of Dick plays off well in this issue, because Morrison is a great writer and he knows how to write the part of Robin/Damian, and Robin is the best part of this issue.

But the question here after all the other stuff is, does it intrigue and interest? I think the issue and the arc in general has a certain hype behind it because it says Morrison on the cover. When you hear all the hype behind it, the issue under-performs. But if you take that away and observe what you have, you have a pretty decent story. The players are all there and the tone is right for Batman. But there are flaws. Like the fact that Gordon somehow over comes the withdrawal symptoms of the drug in the snap of a finger and this whole pandemic is supposed to resolve itself because if Gordon can beat the symptoms, anyone can. The story was more focused on the Hurt/Batman/Robin thing which is completely understandable but to not give us anything else besides the one scene with Gordon is kind of weak. I also didn’t like the scene where Hurt, disguised as Thomas Wayne, goes to Wayne Manor and talks to Alfred. I thought it was unnecessary and it was pretty obvious that if that scene weren’t included it wouldn’t have changed anything, with the only exception being Alfred greeting Hurt. Maybe Morrison could have cut that part out and explained the Gordon/Pandemic thing a little more. But I’m sure the end of this story is just a set up for the next story. I don’t know, but individually and not taking into context the hype surrounding Morrison, this story mostly hold’s its own.

On another note, Irving’s art isn’t as impressive at it has been in the past. Yes, we still have the disturbing, unpleasant visuals that Irving is famous for. But it has kind of dragged itself out and worn itself to the ground. But that’s not to say that it isn’t disturbing, it is, it’s just a bit worn.

Overall, I don’t know if I would recommend this one. I’m still unsure if this was a good issue or not. I’m still on the fence about it. It has it’s good and it’s bad but it feels a bit unsatisfying. What is obvious though is that Batman and Robin is arguably the best Bat-Book on the shelves right now. So if you want to believe that, definitely pick this one up.