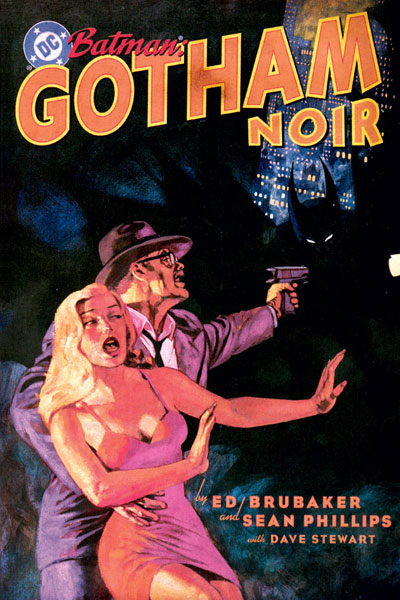 Batman: Gotham Noir is Batman given the hard-boiled detective treatment. Except Bats is not our main protagonist. James Gordon, a private eye, is whose narrative we follow. The amazing team of Ed Brubaker (Writer) and Sean Phillips (Artist), with Dave Stewart (Colorist) and Bill Oakley (Letterer), the same writer/artist pair that is currently producing both series’ Criminal and Incognito (my current obsession).

The main premise surrounds Gordon being blamed for the murder of a woman he was originally hired to protect. Gordon is an ex-cop who now works as a private eye. He is hired by Selina Kyle, owner of the Kitty Cat Club, to protect her friend Rachel. Selina and Gordon know each other from a time when they were romantically involved, however, she is now involved with Bruce Wayne; socialite, wealthy businessman, and philanthropist. It takes place in Gotham City, in October of 1949. Gordon is being chased through alleys by Batman, or by a shadowy figure he thinks to be Batman. A newspaper rolls past and we see the headline, “Ex-Cop A Killer!” Batman implies that Gordon truly did it, but even in Elseworlds, we know Gordon better than that. And thus, once the chase has stopped, he recounts everything that has led to this point in the story.

Gordon has a bit of an alcohol problem in this. His story begins with him waking up in a bar, lying his head on the counter. As any reader of classic crime fiction (Raymond Chandler’s Philip Marlowe, for example), every detective smokes and is quick to have a drink. It’s part of the hard-boiled world. Even Frank Miller’s Sin City follows a similar tradition for the detective character. Selina Kyle offers him a job protecting her friend for a night, if he can keep off the booze that long. He accepts, works without a drink for a bit until he and Rachel (whom he’s protecting) get into an argument. Gordon gets drunk, has a WWII flashback, and essentially doesn’t remember what happened after the argument. Harvey Dent bails him out using his connections as Gotham D.A.

Gordon is told he’s still being considered a suspect in the investigation, and Harvey warns him to stay out of trouble. Like every detective, he ignores him and follows his instincts. He follows Dent and sees him talk to an informant. The informant is Jack Napier. You can guess what happens to him Bat-fans. I tip my hat to Mr. Brubaker, for the Burton film reference to that Joker incarnation. That’s the great thing about Elseworlds; seeing how that particular writer and artist decided to interpret the character is always incredible.

The story has the normal hard-boiled detective twists and turns, intermixed with moments of action. Every detective finds himself in trouble and has a knack for getting out of it, but sometimes not. Gordon takes a beating somewhat throughout, but even he gets his punches in. The only thing I wanted to see more of was Batman himself. I think that the focus of Gordon as the protagonist works, especially given that this is Batman given the crime noir treatment. Batman could never be the hard-boiled detective. He’s Batman. Batman doesn’t drink, can beat any man in a fight due to his mastery of martial arts, and is the world’s greatest detective. His character does not work for that format, and in this respect, I understand and appreciate the effort Brubaker took to follow the detective format, even meeting some of the criteria laid out by Chandler in his short essay, The Simple Art of Murder (look it up online, detective fans).

However, this is also a Batman book, and in that I wanted more of him. Plain and simple. Brubaker never connects Batman and Bruce Wayne. Dent says at the end that he made up the Batman to spook criminals. In fact, by the end, I felt that Dent may have been Batman in this interpretation. And I had to try to figure that out. That’s something I’ve not had to do in a Batman book before. I had to figure out who Batman was. It’s almost always Bruce. Almost always. Highly recommended Batboys and Batgirls.