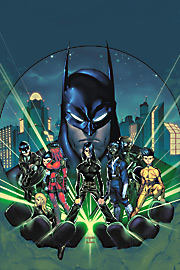 Ah, December. Normally a month flooded with trades and one-shots and minis and… Wait, that sounds exactly like this month. Coming fresh off the heels of a November jammed with papers, December offers a two-part mini-series titled Batman: Orphans. Written by executive editor Eddie Berganza, this mini-series will be concluded with the release of part two on December 22.

The story opens with Robin dead in a pool of blood, rain pouring from the skies in the way that only seems to happen in Gotham. Immediately, we get narration from an unknown character about the rain in Gotham being angel tears, and the rainbows being angel smiles.

The narrator goes through a brief rundown of the Gotham Police Department. We see an archer standing over the dead Robin admiring his handiwork before turning and firing at several approaching cop cars. The arrows cause severe collisions, causing Renee Montoya to vow to make the criminal pay. When Crispus Allen sees who it is, he tells Renee that if this is real, things are about to get a lot worse.

Enter the Batmobile and the narrator. The narrator is Samantha Locke, a reporter for the National Whisper. As she and her photographer, Sam Jackson, take pictures of the crime scene, Detective Allen kicks them away. A running joke through the issue is Sam Jackson quoting another famous Sam Jackson. This time it's Pulp Fiction and it leads us into the next day.

Eddie Berganza must have a major lust for famous quotes, because after showing us the headline DEAD ROBIN!, Dick takes one look at Tim and asks if the rumors of his death have been greatly exaggerated. He and Tim talk about how everyone's handling it and Tim reminds him that if Tim died, it wouldn't be the first Robin Dick has seen die.

All of a sudden, we're in another part of Gotham. Street thugs are about to accost an old Latino woman, trying to snatch her purse. Out of the shadows comes a teen vigilante claiming to be Bat-man. After dispatching the thugs, a voice comes from the shadows, telling the teen his actions were impressive. The voice is revealed to be Batman, informing the teen he could be of use. They make leave both us and the alley there.

We rejoin Samantha Locke, girl reporter, at the doors to the morgue where she resumes narration and begs for entrance to see the body of Robin. After being chased off, they look for a window to squeeze through. The guard lets the coroner know of the goings on and promises to be right outside. In drop, literally, Nightwing and Robin.

Overlooking the body, Robin agrees the kid is his age. The coroner walks us through who the kid actually is, Chris Ward, the son of a LexCorp scientist, a former Olympic level gymnast, and a runaway from Metropolis.

We rejoin Batman walking the teen vigilante through the sewers, asking him about his intentions and whether or not he's planning on doing good. A well-placed kick to a sewer wall opens a secret door that reveals an underground city. According to the narration, after the 'quake, LexCorp just rebuilt the city on top of the rubble of the old structures. "Dig deep enough, and you'll find another city underground." Batman seems to ready to put this new Robin through his paces, tossing him into the ring to face a gaggle of rag-tag children, ready to beat the snot out of him.

More on that later because we're back to Samantha and Sam. They're still trying to find a way into the morgue to get a look at imposter Robin when they spot the real Robin and Nightwing, moving Batman from urban myth to urban reality.

Back to teen vigilante, he's running the proverbial gauntlet, fighting several other teen vigilantes, including one named Monica. Some smacktalk between them reveals Monica always goes for the crotch shots, and Krunch doesn't live up to his name. Then we get a small nerdy kid named Bookworm, tossing some flash pellets, and attempting to distract the teen vigilante, but he's quickly knocked out.

That's when we see the final teen come, attacking with a bo-staff, similar to what the real Robin uses. Clearly they've been saving the best for last as he gets teen vigilante on the ground. Batman calls Lance off, and it's clear this teen passed the audition. On the next page, we see the test wasn't only for the new teen, but also for Lance, as he's rewarded with a Robin costume following the battle.

Part 2. The Robin costume is on the floor as Robin and Monica relieve some tension, between the sheets. Bookworm retrieves the two from the bedroom, and we see Krunch is offering the new teen, named as Francisco, a performance enhancing drug, laced with venom. He declines, but is eventually shot up anyway. The team assembles with Batman, who chews them out for being late, threatening them to take them out himself if needs be.

Meanwhile, back at the Batcave, Dick, Tim, and Bruce are all going over any evidence in the case. Dick is reading up on a rash of missing children the National Whisper has reported on. Bruce decides there's more to Samantha Locke than meets the eye, so he decides to attend a movie premiere, which she's sure to be at. Tim and Dick remain in the cave to continue to comb the evidence.

We're now introduced to a new plot thread, Penguin discussing a LexCorp shipment that needs to be re-routed. This kind of came from nowhere, but in Penguin fashion he has the informer killed, rather than pay him.

At the movie premiere, Bruce notices the Samantha being roughed up and invites her to have a seat with him inside the movie. Sam, her photographer seems suspicious, but lets her go in on her own.

Dick and Tim continue to postulate different theories about who could want a Robin dead. Most people are incarcerated, but they throw out Ra's and Talia, as well of the League of Assassins.

In the end, they go through a list of the missing kids, trying to find a common thread, these panels are interspersed with action shots of the kids in question attacking a group called The Roaches in underground Gotham. The new kid ends up going further than he meant to, seemingly killing one of The Roaches.

Back to Tim and Dick in the cave, Tim starts tripping hard, seeing past events as if they'd been failures. Dick recognizes it first, and tries to shake Tim out of it. Immediately, he starts tripping and seeing the Joker, waxing poetic about the destruction of Robins. He sees his parents, and all the graves of the teammates he's led to their deaths.

As it turns out, the fake Robin's uniform had been douses in fear toxin. Dick shoots them both up with antidote, leading them both to worry about Bruce, who was also exposed.

We return to the movie, where Samantha is storming out and telling Bruce if all he wants is "companionship", there are dozens of women inside that theater. No sooner does she leave than the fear toxin gets to Bruce. As always, we hear the three fateful shots, and see the pearls strewn about the page. Like all good mini-series, this one is "To Be Continued."

I'll admit, I don't like the art style of this book but I'm intrigued by the story. I can't see that Penguin story being slipped in there for no reason, so I'm curious as to what that shipment contains.

The dead Robin angle feels fresh to me and I enjoyed the way the death of Jason Todd was alluded to without it becoming the focus of the story. Bruce, as always, maintains the distinction between Bruce and Batman, mentioning that Bruce will be the one attending the premiere. Sometimes I think writers neglect that aspect, so it was nice to see Eddie Berganza doing that some justice.

The only real complaint I have, aside from the art style, is that I think this might have been better broken up into two issues. It felt very busy for just one issue, and it raises some concerns with me for the next issue.

I don't think this will go down in the annals of history, but it's a pleasant way to spend half an hour.