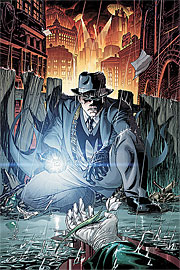 Every good detective story starts with a dame. Batman: The Return of Bruce Wayne #5, the penultimate issue of this timelost mini-series, is no different. After being shot and run over by a car at the end of the previous issue, we first see a confused Bruce Wayne recovering in a Gotham hospital bed. That’s where he’s introduced to the beautiful but mysterious Ms. Marsha Lamarr. While she has paid for his treatment, it becomes clear that Marsha has plans for this wounded stranger, and it involves a Bat costume. She’s investigating the murder of her friend Martha Wayne and she needs Bruce’s help.. The detective’s instinctual need for answers makes her offer hard to refuse. And as his new acquaintance departs, she is heard uttering “This could be the beginning of a beautiful friendship.”

While I found Morrison’s writing in the western-themed Batman: The Return of Bruce Wayne #4 unusually clumsy, Morrison is at his best here. He has created a palpable tone of impending doom. The reader knows that Bruce will be betrayed by his gorgeous benefactor, but that doesn’t make the ride any less enjoyable. Morrison is at the top of his literary game here when discussing the science of time travel. From the mind of Morrison we get time hypnosis, probability viewers and portable time travel field generators.

Never has Morrison’s practice of re-using characters and storylines from Batman’s distant and recent past been more apparent than here. Every page is a tribute to the Batman mythos. Just look at temporal scientist, Dr Carter Nichols. The time traveling Nichols was a major character in Morrison’s Batman #700. In Batman: The Return of Bruce Wayne #5 we find out he was being groomed for a spot as a member of The Black Glove. A spot that was offered, and rejected by Bruce’s very own maternal grandfather Roderick Kane! Marsha also reveals to Bruce that philanthropist/film director/Club of Heroes organizer/Black Glove member, John Mayhew is an admirer of hers. It’s also revealed that the infamous pearls worn by Martha Wayne on the night of her murder were a Van Derm family heirloom. This further cements the bond between the two families through history.

This book is full of pulp fiction cliches. We get the femme fatale, the reluctant scientist, and the heroic detective. Even the expected double-cross. The only thing missing is for our hero to be drinking whiskey from the bottle hidden in his desk drawer. But characters and story devices become cliche because they’re cool. And this story is COOL! Morrison even throws the reader a meta-textual bone when Bruce says of the book that stopped a bullet from killing him in the previous issue, “The plot’s got a few holes, but I think it’s starting to make sense.” Now that’s cool!

Ultimately, all these machinations by Ms Lamarr have been to simply dupe an unsuspecting soul into wearing a Bat-man costume and unwittingly star in some creepy Wayne family snuff film. Because, as is stated in the book, “A man’s soul is in his reputation. His legacy.” Because, while Marsha’s motivation is immortality, it’s clear that Thomas Wayne/Dr Hurt’s mission has been to defeat Batman by destroying his pristine legacy. The book concludes with a haunting image of Bruce Wayne dressed as the Vanishing Point archivist from Batman: The Return of Bruce Wayne #2. Much to Red Robin’s alarm, Bruce appears to be emerging from Rip Hunter’s time sphere into the present-day Hall of Justice. This could prove to be a problem as a method of neutralizing Bruce’s time traveling omega charge is still in development.

Grant Morrison’s lofty status among comic book writers has afforded him the ability to be selective with the artists he chooses. He clearly has a stable of illustrators that he trusts to bring his concepts to the page. Ryan Sook is one of those “Master Draftsman” that expertly captures the mood of Morrison’s existential writing style. I recall Sook’s impressive pencils on the Zatanna story which was part of Morrison’s epic Seven Soldiers of Victory tale from DC Comics. It’s interesting to note that Sook isn’t the only penciler on Batman: The Return of Bruce Wayne #5. The book credits Pere Perez with art responsibilities on the final ten pages. Perez does an uncanny job of mimicking Sook’s art from the previous pages. This isn’t the first time for that sort of work for Perez. He did the same thing with Lee Garbett on some Batgirl issue earlier this year. Hopefully we’ll get to see what Perez’s personal style is shortly as he pencils Bruce Wayne: The Road Home-Batgirl. And while the interior art of this series has been inconsistent, ie Georges Jeanty’s obvious rush-job on the previous issue, Andy Kubert’s cover art has been stunning throughout. This time, Kubert treats us to “Detective” Bruce Wayne adorned in classic pulp attire complete with utility belt, bat-vest and trusty bat-flashlight. Regular Batgirl artist, Lee Garbett, is tasked with the penciling duties on Batman: The Return of Bruce Wayne #6. Hopefully DC has learned from recent history, and is willing to delay the release of No. 6 to ensure that the art is on par with the previous issues. An epic conclusion will cement this mini-series as a landmark event in the history of Gotham for years to come.

Batman: The Return of Bruce Wayne #5: