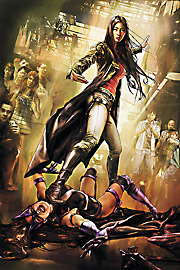 The second part of this two-part story-arc is entitled 'Two Nights in Bangkok' and starts immediately as the first part ended: Huntress and Lady Blackhawk – Helena Bertinelli and Zinda Blake – coming face to face, face to fist even, with their friend Black Canary – Dinah Lance – and a group of bodyguards loyal to White Canary.

Aware that their confrontation will likely endanger onlooking members of public and at the same time conscious that the authorities are on their way Dinah orders one of her aids – a young woman named Terry – to gather everyone together into a commandeered taxi cab. Another of the guards takes Huntress's arm to help her towards the vehicle but not before apologizing for his earlier actions: it's too late though as she punches the enormous man in the face and knocks him out.

Once in the car Dinah instructs Terry to drive them to what is described as the 'holding facility'. As Terry again refers to Dinah as her 'mistress' Huntress realizes that the situation the friends find themselves in is beyond complicated: Dinah looks a beaten woman, almost like she's resigned to circumstance.

More than a little curious to know what's happening Helena wonders to herself just how open the friends can be with one another – clearly Dinah has been compromised. Dinah explains that both Helena and Zinda will be held for 24 hours and then permitted to leave … at which point 'it won't matter'. What won't matter one wonders?

Not content with such a vague explanation Helena demands to know more. Reluctantly, and in an almost matter of fact tone, Dinah explains that White Canary is holding her 'daughter' Sin, along with the girls foster parents, as leverage to ensure she goes through with her task – namely that she challenge Lady Shiva to a dual 'to the death'.

Shocked by this news Helena asks whether Dinah could possible win such a contest – the answer, regrettably, is that it's extremely unlikely. In fact Dinah is beaten before she begins because she's convinced that this is one fight she in fact simply can't win.

Listening intently, silently, to the conversation the young 'student' Terry explains that while she may be studying under White Canary all she has ever cared about has been martial arts and she wants no part in this particular scheme. She offers the Birds her support – which is declined for the young woman's safety.

Desperate for answers Zinda questions why Lady Shiva is playing along with White Canary's plan – and Dinah, reluctantly, regrettably, finds herself excusing Shiva on the grounds that she's likely doing it for Sin's sake as well as her own.

Arriving at their destination – the aforementioned holding facility – the women are surprised by the grand, almost luxurious, facility that is to serve as their prison for the next 24 hours.

Half-way around the world we return to Gotham City. Firstly to the Sacred Hands Hospital where Hawk – Hank Hall – is recovering from the wounds he incurred earlier. Dove – Dawn Granger – urges him to take things easy but he won't hear a word of it – he's determined to seek vengeance on those that harmed them … until he's stopped in his tracks by the remote voice of Oracle – Barbara Gordon – instructing him to stand down.

Despite reassurances from Hank that he won't take any action Barbara reveals to Savant and Creote, who are watching over events at the hospital with her, that she doesn't believe – trust – him for a minute.

Returning to Bangkok and Helena, Dinah and Zinda are 'enjoying' their evenings entertainment – in front of them is a sumptuous meal and traditional dancing but the women, of course, find it impossible to relax in their surroundings. Across the room from the women sit White Canary and beside her Lady Shiva. Struggling to understand events Helena wonders aloud whether 'food before fighting' is a tradition while Dinah suspects that it's an attempt to shame her. It's not enough, she suspects to bring her down but she has to bring her name down as well, her mothers legacy.

Realizing that rather than tradition the women are dealing with a matter of honor and pride Helena is at first shocked when Dinah asks her to act as her second – to issue the challenge to Shiva – and in turn to let both Barbara and Oliver Queen know that she loves them.

Unable to contain herself, and seizing her opportunity, Helena rushes across the room but rather than simply challenging Shiva on Dinah's behalf she soaks her with the contents of a glass of water, tells her to shut-up, to back down and, realizing that Dinah is in no physical – and just as importantly mental condition – to fight, throws down a gauntlet herself: a 'fight to the death'.

With the challenge accepted Helena, Dinah and Zinda leave the banquet to prepare for the dual. Explaining to her friend why she's going ahead with the challenge Helena asks Zinda to take Dinah away – before she privately falls to her knees to pray.

In the dining hall, meanwhile, Dinah confronts Shiva and demands that she fight her as originally planned: a demand that is declined on grounds of, again, honor as Shiva calmly explains that she is already committed to fighting Helena. As Huntress reappears and beckons her opponent the young student Terry quietly explains to Dinah and to Zinda that she knows where Sin is being held…

As the challenge gets underway both women agree that the only rule of their fight is there are to be no weapons – street fighting. Within seconds Huntress is overwhelmed as Shiva demonstrates her speed and experience are, for the moment at least, too much. With blood splattered across her face from countless punches Huntress manages to get back to her feet every time she's knocked down, taunting Shiva as she goes.

Elsewhere in the facility Dinah and Terry have managed to locate Sin. After comforting the child Dinah instructs Terry to take Sin, find her foster parents and to take them all to safety … she has 'business to finish'.

Returning to the main hall and Huntress continues to receive a beating. Coughing up a handful of blood which she then throws in Shiva's face temporarily blinding her, Huntress seizes her moment and lands a tremendous upper blow that knocks her opponent from her feet. Just moments later though Shiva recovers her position and the two women prepare to engage one more time. In her heart of hearts Huntress realizes that this is a fight she can't win, but she's determined to give a good account of herself.

With Sin now safe and sensing that she has an opportunity to stop the fight Dinah steps in and explains that while she understands it's a matter of duty, of honor as has been explained, the fight has to end – for now at least to be revisited at a later time. Turning their attention to White Canary the women – now joined side by side by Lady Shiva – explain that their challenge is indeed now over.

As White Canary walks away she issues a threat – 'death will come … may your sleep be restless and filled with dreams of me'.

Finding her feet, to her surprise with the help of Lady Shiva, Helena embraces Dinah glad that their ordeal is over.

After several recent disappointments this issue felt like something of a return to form from the Birds of Prey creative team. I felt we were treated to an enjoyable story which was complimented by some pleasing interior art and, once again a fantastic cover.

It really was a treat that the book was largely written from Huntress's perspective: the narration was hers, we were reminded of her weaknesses and regrets as much as her strengths and I found myself truly appreciating the depth of characters that are encompassed by the Birds of Prey title. I'd have been happy to see this short story-arc run a little longer which, in turn, might have allowed writer Gail Simone to expand a couple of elements that I'd like to have read more of.

Firstly, the build up to Helena's initial confrontation of Lady Shiva – culminating in her throwing the glass of water – felt all too short and I'd have liked to hear more from Shiva at this point to better understand her motivation. In a similar vein, Dinah's reunion with Sin felt all too brief and we saw nothing of her 'extraction' along with her foster parents – I trust this is a thread that will be told else when.

While clearly the 'fight to the death' was never going to end in any of the main characters death I enjoyed how Gail Simone dealt with this issue without, in truth, the story feeling like a compromise. The short scenes featuring Hawk & Dove and Barbara, Savant & Creote while introducing an element of fun – Dove's reaction when Hawk removed his hospital gown – and intrigue – Barbara confirming that she doesn't trust Hawk – felt a little out of place and these are the pages I'd like to have seen used to expand the main feature.

The interior art was, in my opinion, much more satisfactory than in the previous issue. There was a greater sense of consistency throughout the book although I was still troubled by a couple of pages towards the end of the Huntress/Shiva fight. I enjoyed the level of detail that Alvin Lee and Adriana Melo were able to include in every panel and thought that throughout the book the facial expressions were fantastic – telling the reader more about the characters mind-set than was possible through words – although, if I'm being picky, I struggled once of twice to distinguish between some of the characters: Dinah and Zinda, Helena and Shiva for example.

Minor gripes aside, I get a sense that the interior art is getting back to the standard we saw from Ed Benes in the early issues of the series. As I declared in my review of the previous issue of Birds of Prey I'm a huge fan of Alina Urusov's covers and this issue doesn't disappoint. I love the different techniques used here with Shiva and Huntress pictured bold and colorful while the background figures appear faded and out of focus with the street architecture – buildings, signs, fire-escapes etc – almost disappearing then reappearing before our very eyes. I appreciated how Urusov had captured the look of anguish on Huntress's face which is in stark contrast to the sense of calm, determination and, with hindsight, regret from Shiva.

To sum up, and as I've already intimated, this was an enjoyable, satisfying read that told a largely self-contained story, left me with numerous unanswered questions – a good thing in my book – and I'm once again looking forward to following the ongoing Birds of Prey story.