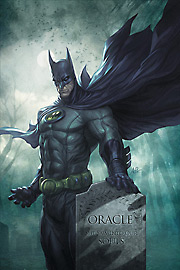 'The Cape and the Cadaver' – first of the four part 'Death of Oracle' story-arc – opens at the window of a fairly anonymous looking Gotham City high-rise. At the window stands a man – The Calculator – surveying the city before him, wondering aloud just why Gotham's villains choose to make the city their home, the scene of their crimes.

Interrupted by one of his associates, Calculator is introduced to a visitor: Brian Durlin aka Savant. Comfortable that Savant isn't carrying a weapon Calculator welcomes his visitor with open arms. Refusing the hospitality that's offered to him Savant reminds his host that he's there for one reason and one reason only – cash, in exchange for Oracle's precise location …

Elsewhere we witness Barbara Gordon – Oracle – on patrol in the alleyways surrounding the Gotham City docks: one of the city's worst neighborhoods we're reminded. Rounding a corner Babs comes face to face with one of the gangs of 'tweakers and bangers and pimps' that call this neighborhood their home.

As the gang advances and confronts her, Babs muses over the irony that since the local drug lord was 'convinced' to leave the docks violent crime has risen – and she's about to experience that violence first hand.

Using a garbage can lid as a missile Barbara hits out first then follows up with blow after blow from her billy sticks. In no time at all three of the gang are grounded and unconscious. Moments later a forth man – the apparent leader of the gang – charges at Barbara with a knife but he is also swiftly dealt with: to her embarrassment landing head first in her lap.

Spurred on by a young female the last gang-member standing draws his gun and places his finger on the trigger. As her assailant approaches Barbara realizes that, thankfully, she's not alone as Batman – Bruce Wayne Batman – swoops down into the alley and effortlessly overcomes the gunman. Turning immediately Bruce disarms the young girl, tells her to get along to Dr. Leslie Thompkins clinic where help is at hand … and threatens her never to come back to the docks unless she's 'clean'.

Having been relieved of her earlier embarrassment Barbara braces herself for a ticking-off from Bruce – patrolling around the entrance to her safe-house is one thing, but doing it alone is another. Much to her surprise Bruce ignores her admission that she's probably been a little irresponsible as he surprisingly suggests … a hug.

Realizing that Dinah's comments are more than just idle chatter Dawn defends her friend – as the scene cuts to outside the club where we see Hank stop, toss aside a beautifully-wrapped gift addressed to Dawn, turn-around and walk away.

Elsewhere, in a roof-top garden, Calculator and his associate have met with a mysteriously veiled young woman who introduces herself as 'Mortis, Goddess of the Forgotten Dead'. Challenged by Calculator to prove that her so called gift is real Mortis gently takes the hand of his associate – and in an instant the man breaks into tears, an uncontrollable sweat and charges through a glass window falling, we assume, to his death.

Returning to Barbara and her safe-house Bruce has been handed a list – 13 names excluding her own – of those people that have been entrusted with the location of and access to the safe-house. Barbara goes on to explain that her base can be accessed from four different entrances throughout the city linked to a largely pre-existing network of tunnels. Furthermore, her base – inside Kord Tower – has been constructed by numerous contractors meaning that no one person knows everything.

Arriving at the elevator entrance Bruce is met by a familiar adversary – Aleksandr Creote – who Babs introduces as her personal assistant. Entering the observation platform Barbara and Bruce look out across the city – their city. Bruce reveals that things in their world are going to change and that he's looking for support from all of his 'family' … and particularly from Oracle.

Without looking up and catching Bruce's eye Barbara explains that it's probably better if he doesn't refer to her as that – Oracle – '… because tonight Oracle dies. Once and for all'.

At that moment the two friends are joined by Savant who Barbara introduces as her 'IT guy' before asking how things went, whether 'they' believed him. Explaining more to Bruce, Babs asks that he trust her, if no-one else, as she's of the belief that too many people know about Oracle – and that puts every one of those people in danger.

Back across the city the Birds are continuing to enjoy their 'girls night out' until … a huge explosion admits some unwelcome guests to the club. Dinah orders her friend Helena to get away: an order that Helena refuses to follow of course. As Zinda gets back on her feet – having been knocked to the ground by the earlier explosion – Helena does her best to revive Dove who, it appears, is sleeping off the evenings excesses!

Believing that the Birds are no physical match for the aforementioned unwelcome guests, who include 'Mammoth' Baran Flinders in their ranks, Dinah realizes that the only weapon available to them – her Canary Cry – is just too dangerous to use in the crowded club.

With Dove now awake and aware Zinda urges her to target 'the big one' – Mammoth of course. This she does but with little or no success as he returns her assault and knocks Dove off her feet and across the room.

Seemingly at a loss as to how they can overcome their aggressors the Birds fear the worse as the violence pauses … and Mortis enters the club demanding to know which of the women is Oracle.

First things first, I thought on the whole this issue was quite a satisfying read – a nicely-told, well-paced story accompanied by some very nice cover and interior artwork.

For me the Birds of Prey series has suffered, beyond the first couple of issues, as a result of some jarring inconsistencies in the interior art – I'm referring to changes within an issue rather than issue-to-issue. Therefore, I appreciated reading a whole issue illustrated by one penciller – Ardian Syaf – and one inker – Vicente Cifuentes. As a result the story felt a lot more 'fluid' than in recent months and, therefore, a more enjoyable read.

Not being particularly familiar with Mr. Syaf's work I must say I was quite taken with the level of detail he was able to include in pretty much every panel – from the complex facial expressions on 'secondary' characters to location backgrounds including a highly effective use of shadows.

Equal credit should also be extended, I believe, to regular series colorist Nei Ruffino, who's work perfectly captured the tone of this issue – naturally dark yet clear and crisp, some most striking use of color – blue, auburn, green – set against often somber backgrounds represented by alleyway brickwork and the sometimes cold, clear, Gotham sky.

In terms of writing, as I previously intimated, I felt this was a solid enjoyable story that proved to be a good set-up for this new story-arc. After recent troubles – well documented through the series so far – I can totally see that Barbara would be looking for a less high-profile Oracle, for a while at least, although just how far writer Gail Simone can take this theme only time will tell of course.

While I'm sure that 'the death of Oracle' doesn't – couldn't – mean the death of Barbara Gordon, by the same token with Oracle one of the cornerstones of this particularly large chunk of the DCU, can Oracle truly die 'once and for all'?

Those, and other questions, are some of the reasons why we'll continue to follow along of course.

The central appearance in this issue of the Calculator was a surprise, a puzzle and, to be honest, a little of a disappointment. If I remember correctly it was just a few short months ago, in the pages of the Batgirl title, that we saw Calculator carried away by the authorities with his daughter Wendy's words that he 'won't be bothering anyone for a very long time' echoing around the room and yet here he is, apparently back on his feet with his 'empire' in place around him.

Maybe Calculator's recovery, his renaissance, is covered in another title that I'm either not currently reading or have fallen behind with and that would explain my sense of puzzlement but my disappointment …? I believe I understand his complicated history with Oracle but, having been a central character in Bat-family history over the past year or so I felt we'd moved on to other adversaries, for the moment at least.

Changing focus, the Hawk and Dove 'relationship' hasn't landed with me as yet: each contributes their own unique qualities – Dove with her really quite endearing naivete and Hawk with his brusque and surly demeanor – and I'll be interested to see if their importance to the team grows as time passes.

The appearance – albeit fleeting – of Mortis, the 'Goddess of the forgotten dead' likewise intrigues me. I like the concept of the villain that, with a single, brief, touch of her hand can compel a grown man to leap to his death from a rooftop and I hope we see much more of her over forthcoming issues.

Finally, the cover from Stanley 'Artgerm' Lau. If you've read any of the other reviews of books that Mr. Lau has contributed to you'll know that I'm a big fan of his work and this image – Bruce Wayne's Batman solemnly standing over Oracle's gravestone – is absolutely fabulous.

As simple and stark as it at first appeared the artist has expertly captured a tremendous sense of sorrow, regret, maybe even guilt. I'm not, however, entirely sure it was the right subject for this particular issue – aside from the fact that Oracle isn't, as yet, dead, I'd have liked this cover of Birds of Prey to feature … one or more of the Birds of Prey team.

Accepting, and very much appreciating, that the Bat-family books feed off of one another this cover felt, to me, like it was being used to promote the title as part of 'Batman, Incorporated' rather than on its own merits. All of that said, I did very much enjoy Bruce's appearances within the pages of the book – from their initial encounter in the alleyway, through the somewhat awkward 'reintroductions' to Bruce's validation that now, perhaps more than ever, he'll be relying on Barbara and her team.

If I may finish on a very personal note, one of the things I enjoy about reviewing this, and one or two other titles, is that I'm forced to really think, and then really think again, about many different aspects of the book that I wouldn't perhaps otherwise consider – the more I thought about this issue the more I found to appreciate.