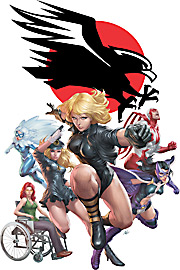 "The Death of Oracle" continues with the second part of this four-part story-arc entitled "The Gauntlets and the Guillotine". Having smashed their way into the nightclub where the Birds of Prey were enjoying a girls night out, Mortis – the self-proclaimed "Goddess of the Forgotten Dead" – accompanied by Mammoth and the "newbie" villain known as Current confronts the Birds demanding, for the final time they are told, to know which of them is Oracle.

Zinda Blake – Lady Blackhawk – steps forward to tackle Mortis and is immediately warned off by her opponent with the suggestion that with just a single touch of her hand others have been driven to suicide – and she could easily be next. Not one to take kindly to being threatened Helena Bertinelli – Huntress – steps across her friends and into Mortis's line of sight … "Try it" dares Helena as Mortis turns her attentions to Dinah – Black Canary.

Elsewhere, events in the club are being monitored by Calculator who's delighted that the information he paid Savant for looks like being accurate – and he reminds himself that he must, in turn, kill his one-time informant.

Across the city at Barbara Gordon's new high-tech, highly-secret base of operations in Kord Tower, Babs and Bruce Wayne – Oracle and Batman of course – are likewise following events. Babs reveals that while she's aware of Mammoth both Mortis and Current are new to her … and as such causing her to be more than a little concerned.

Appreciating the scale of the situation Bruce offers a solution – he can intervene – which Babs immediately dismisses: the Birds of Prey are her team, her responsibility. Besides, Barbara reasons, her team, including as it does Black Canary and Huntress, can handle the situation can't they.

Returning to the nightclub and Mortis offers Dinah one last opportunity to cooperate before Dove – Dawn Grainger – steps in and, to my surprise, identifies herself as the elusive Oracle. As events at the club unfold we cut across town where the aforementioned Calculator is now writhing in pain on the floor of his office – on the verge of a breakdown it seems: with no secret powers or costume to rely upon Calculator has always relied upon and prided himself on his intelligence, his brain – and now, thanks to Oracle he believes, his mind is failing him.

At Penguin's Iceberg Lounge, which remains closed for repairs, we discover Oswald Cobblepot 'auditioning' new waiting staff and very quickly losing his patience with his new employees. As he takes his frustration out on one young woman he becomes aware that they have been joined by Hawk – the Avatar of War Hank Hall, who we learn has somehow managed to switch off his comm link connecting him to Oracle – demanding an audience with Penguin.

Apparently having something of a change of heart from their earlier conversation Barbara Gordon appears willing to enlist Batman's help but she has a feeling that her friend isn't going to like her idea – for the first time Batman will have to take a dive. This isn't the time, Babs reveals, to explain to Bruce what she has done to The Calculator … she was vulnerable, Calculator knew her identity, so she took their fight into his mind and altered his memories.

As Calculator uses recognition software for details of Dove's background – the results of which I assume have been tampered with by Barbara to give false information – we return to the nightclub where, with the public apparently clear of the club, Babs finally gives the word for the Birds to engage their opponents – much to Dinah's relief and pleasure. With a single blow she knocks Mortis off her feet warning the others to be careful of her touch. With Mortis down, but certainly not out, the Birds turn their attention to both Current and Mammoth … and their army of 'foot soldiers'.

Amidst all this violence Helena realizes that the premises aren't, after all, free of members of the public as she discovers two women crouching under a table desperately trying to avoid getting caught up in the madness. As Black Canary, now delighted to have been joined by Batman, does her best to keep the onslaught at bay Helena, with the help of Lady Blackhawk, usher the women towards safety.

With Mortis grounded, and Batman now part of his opposition, Current reveals to Calculator that he wants out – but Calculator is having none of it as he threatens his 'employee' that if he doesn't do as he's instructed he may just have to ask Mammoth to pay a visit to his girlfriend.

Reaching the outer ruined walls of the club Helena and Lady Blackhawk are relieved that they've managed to get the civilians to safety … only to find themselves held captive at gunpoint.

Distracted by the events unfolding before her Black Canary fails to notice Mortis approaching from behind – as she removes her glove just one touch of her hand sends Dinah into a trance-like state: Barbara's words of warning to the group coming just too late.

With her friend and team-mate under threat and vulnerable Dove backs down and allows herself to be taken. As Mortis, Mammoth, Current and their men seize Dove and make their exit the "Goddess of the Forgotten Dead" reveals that once in a trance none of her victims ever come out of it …

What can the future hold for the Birds of Prey, and particularly Black Canary?

This was another galloping Birds of Prey adventure from writer Gail Simone – pretty much every scene, except perhaps for those set at Kord Tower between Barbara and Bruce, had a sense of chaos and confusion about them as the story jumped around Gotham city at a rapid pace, but without ever feeling particularly rushed, rarely stopping anywhere for more than what seemed like a few minutes.

What at first appeared to me to be a fairly shallow story grew, with a second and third read, into something much more complex. Having finished reading the issue, I find myself asking many questions that I'm now genuinely keen to answer.

The overarching question is, of course, just what is Barbara's plan? Through Savant she's set this confrontation up – I'm surprised she's chosen such a public venue – but to what end? Why is Dove passing herself off as Oracle? Of all the team members who amongst us would have chosen Dove for such a crucial and dangerous 'mission'? Batman's involvement may – just may! – have been initially unplanned but what part does he now play in Barbara's scheme and why ask him to take such a very public fall?

On a minor, fairly trivial point, I've appreciated the 'name tags' that have appeared throughout this series: identifying the character – Oracle aka Barbara Gordon for instance – and including a thumbnail description of them – Formerly Batgirl, now the world's premier info-jock and data specialist supreme. I smiled, therefore, when Batman was introduced simply as "Batman aka Bruce Wayne". Less is most definitely more.

For sure there were one or two elements to the story that, for me initially at least, felt somewhat unnecessary and drawn out – the scenes where the two ladies were discovered in the club and had to be escorted to safety come to mind as did the couple of pages where we witnessed Penguin auditioning his staff in the finer points of waiting tables.

That said, I appreciate that such scenes can give the reader a chance to catch one's breath in what was, as I say, an extremely 'hectic' issue. The Penguin scenes also produced one of my favorite panels of artwork in the entire issue from Guillem March – the moment he almost exploded with rage when he felt that his waitress wasn't listening to him was absolutely fantastic: unrecognizable and yet unmistakeably Penguin.

Speaking of the interior art I was surprised to turn the front cover and discover another 'new' artist on this title after last months debut from Ardian Syaf. Thankfully, for me anyway, I'm a huge of admirer of Guillem March's style and I enjoyed his work throughout this book – I always feel there a great deal of depth to his art as his figures almost stand-out from the page and this issue was no different. Likewise, I've always appreciated that the artist manages to include so much detail in his panels – on first read through the detail can be almost be incidental sometimes only fully appreciated with a second or third read.

The overall quality of the Birds of Prey series has, in my opinion, suffered as a result of so many changes to the books principle artist although the impact has thankfully been lessened by the quality of the artists involved. That said, I look forward to a time when one artist is able to commit to the series for an extended period of time.

Turning to the books cover, and in many ways I can echo my previous comments regarding the cover of Batgirl #17: the illustration, on this occasion from Stanley 'Artgerm' Lau, is simply fantastic: I love the composition of the montage of Birds of Prey team members – although it's somewhat undermined by Barbara's framing which gives me the impression somewhat that Mr. Lau didn't quite know how to include her – but I just can't fully appreciate these very stylized special covers what we're seeing across the Bat-family books this month.

In closing, I thought the final page of this issue – both the sentiment it conveyed and the quality of the illustration – was fantastic and almost worth the cover price alone. All in all, another solid read that's left me puzzling about the story and leaves me wanting more. Highly recommended.