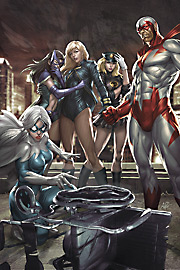 'The Death of Oracle' continues with the third installment of this four-part story-arc. 'The Soul and the Sacrifice' opens with something of a surprise: Dinah 'Black Canary' Lance's late mother – Dinah Drake Lance – greeting her daughter from the headquarters of the JSA. When her mother asks why everything she loves dies and, as only a mother can, why she won't wear her hair differently, Dinah understandably becomes emotional.

Moments later she finds herself in the company of her father – her late father – who questions whether his "kitten" is eating properly. As her father fades before her eyes her mother reappears, reminding Dinah that her father had died a painful death and that she was nowhere to be found.

At this point tears are cascading down Dinah's cheeks.

Through appearances of Red Arrow Roy Harper and Green Arrow Oliver Queen, culminating in a vision of her 'daughter' Sin who, matter of fact, tells Dinah how very lonely she is we see that Dinah can take no more pain and we witness her curled up in a ball – her memories and thoughts finally having got the better of her.

Out of Dinah's mind and back into reality Batman – "The" Batman, Bruce Wayne – crouches over her while speaking with Oracle – Barbara Gordon – over the comm unit. Understanding the seriousness of the situation Barbara reminds Bruce that her friend is presently wanted for murder so taking her to somewhere as public as a hospital might not be such a good idea. Instructing him to bring her back to base – Kord Tower – Babs explains that any physical injuries Dinah may be suffering from are likely to be the least of their problems.

Inquiring about the rest of her team – Dawn Granger, Dove; Helena Bertinelli, Huntress and Zinda Blake, Lady Blackhawk – Babs learns that they have all been captured by Calculator. Not exactly as planned … but, by the same token, not a million miles away from it we suspect.

As Batman gathers-up Black Canary into his arms and takes flight back to Kord Tower the story cuts to a school bus hastily traveling through the otherwise deserted city streets. On board the bus Dawn, Helena and Zinda appear unharmed but have their hands bound. Looking on, one of their 'hosts' reminds the women that with an automatic weapon trained on them any aggressive moves would not be recommended.

Responding to Helena's jibes he reveals his name to be Current, one time partner "in the special effects business" of Bolt. As Zinda joins in with the understandably bad-natured conversation Current, aware that all three women will be carrying tracking devices, instructs one of his charges to search the women – "make it … thorough" he says.

Taking this as her cue to lash out Zinda 'knees' the guard, only to be struck herself by the now-charged Charge. With blood dripping from the corner of her mouth Zinda warns her attacker of the consequences of striking her again. Her words seem to connect as Charge turns his back, walks away and instructs another of his crew that they are nearly at their destination – and if there's any more trouble from "the blond" to let him know and he'll deal with her.

Back at Kord Tower Barbara has a surprise visitor: Hank Hall, Hawk – Avatar of War. His appearance is a surprise because, as Babs points out, he'd been untraceable for fully fifteen minutes earlier, and that *shouldn't* be possible. Hiding the fact that he'd paid a private visit to Penguin's club Hawk asks for Dove's whereabouts.

As Barbara discovers she's now lost track of her three friends Batman arrives with Black Canary in his arms. Summoning Savant, his medical skills may be required, Barbara once again reminds herself that physically Dinah's fine, it's the effects of her very brief encounter with Mortis that's causing the problem.

Becoming ever more agitated with events Hawk starts hitting out at those around him – initially verbally to Barbara before turning and striking out at Bruce. Evading his initial blows Bruce doesn't appear to want to fight and before things can get too out of hand Barbara brings Hawk to the ground with a well placed strike of her baton before declaring that they will rescue Dove – along with Huntress and Lady Blackhawk – and then they'll talk about his attitude.

But first, she needs to be somewhere else.

As Barbara makes her exit the story returns to the turmoil inside Dinah's mind as Mortis, Goddess of the Forgotten Dead, once again plays wicked games with her memories. Taunted that her friends have abandoned her – again – Dinah appears at breaking point, rivers of tears streaming from her eyes. Despite appearances though Dinah is far from down and out as, summoning all of her mental strength, she rises to Mortis's challenges and declares that she won't be beaten.

Elsewhere in Gotham, Calculator, Mammoth, Current and their team of HIVE agents look on bemused as Mortis herself appears to be suffering from some sort of seizure. Realizing that such involuntary actions likely mean that her "prey" must have found a way to set herself free he immediately returns his attention to his prisoners – Dawn, Helena and Zinda.

Explaining that he's only really interested in Oracle he turns his weapon on Zinda – she's no use to him. Before he can pull the trigger Dawn breaks free of her shackles and with a mighty 'Dove' cry disarms Calculator, evades an attack from Current and knocks Mammoth from his feet.

Turning her attention back to Calculator Dove momentarily discovers that he once again appears to hold the upper hand – Zinda Blake is again at his mercy. In an instance though the stakes are raised as an armored helicopter rises into the air, sends a verbal warning before opening fire. As Calculator and his team take cover – and decide that the aircraft is being piloted by Oracle – the Birds likewise make their way towards temporary safety.

Realizing that this could be an opportunity, possibly his only opportunity, to rid himself of Oracle, Calculator instructs Current to take down the helicopter – by using, interestingly, just half of his usual power: presumably he doesn't want the aircraft and its pilot totally destroyed.

Moments later, with the Birds once again in the hands of their pursuers and the aircraft in flames, Calculator announces, with a broad, satisfied smile, that finally his pain "is completely gone".

I really enjoyed this book – and after nine issues of this series I'm very happy to be able to say that. After Birds of Prey burst back onto our pull-lists I've felt I've struggled at times to avoid using words like 'decent', 'solid', 'serviceable' (I hear that word used quite often to describe comics and I'm not really sure what it means!) – words that to me mean 'okay', 'good' even but certainly someway short of excellent.

This was an excellent issue.

I immediately warmed to Inaki Miranda's interior artwork – I thought it was among some of the best we've seen so far in the series. Likewise Gail Simone's writing was fantastic – and again I've not always felt able to say that about Birds of Prey this past year.

The cover art from Stanley 'Artgerm' Lau is stunning – in fact I think my biggest worry with Artgerm's covers is that my expectations are so high that inevitably I'm going to be disappointed: and yet issue after issue he delivers the goods!

When I saw a digital preview of the cover I wasn't, to be honest, particularly taken with it. Only now that I can hold the issue in my hands have I been able to truly appreciate it for all its beauty. Despite having much of her face covered the sense of shock and anguish that Huntress feels is clearly evident. Holding onto her friend Dinah, Black Canary, for strength it's Huntress, rather than anyone or anything else featured that's the focus of this cover for me. If I have just one criticism, it's that facially Black Canary and Lady Blackhawk look just a little too similar.

Gathered around an overturned, crumpled wheelchair we really get a feel for the individual strengths – and weaknesses – of the Birds.

In terms of the story I thought the strongest, stand out scenes were the dream – or more appropriately nightmare – sequences. Opening with Dinah coming face to face with her mother, her father, loved ones, and closing with her battle of mental strength with Mortis, I thought the story was perfectly framed. I found the opening pages really quite touching as Dinah came face to face with those ghosts from her past and I really did feel her pain as she found herself at the sharp end of some pretty blunt comments.

Credit equally to Inaki Miranda for adding to Dinah's vulnerabilities by portraying her, it occurred to me as a younger, less physically-confident woman than I'm used to seeing.

The 'war of minds' towards the very end of the book was similarly powerful I felt, as we witnessed Dinah teeter on the brink of a complete mental breakdown and, just as it looked like she was 'down and out', draw upon her inner strengths and fight back against her opponent.

As well as being the focus of the cover, for me Huntress's portrayal was a stand out feature of the book – particularly through her beautifully written inner monologue. As those around her were in danger of losing their heads Huntress – who I've often felt was very much a 'punch-now-ask-questions-later' character – was able to remain calm, mindful of the broader picture.

The scenes set a Kord Tower and featuring Oracle, Hawk and Batman were at the same time enjoyable to read and yet disappointing to look at. I enjoyed reading as Hank took out his frustration on those around him, and the respective responses from Oracle and Batman and yet at times the art on these few pages left me a little disappointed. I felt there were some inconsistencies in Barbara Gordon's appearance and at times Hank Hall's body shape didn't quite look right to me.

Those comments aside I reiterate that I thought the art was among some of the best we've seen so far – the beautiful 'pin-up' splash page that opened the issue, the look of absolute horror in Dinah's eyes throughout the opening pages, the depth and warmth that I sensed in pretty much every panel and some eye-catching, thought-provoking, imaginative page layouts.

I believe Inaki Miranda is solicited as the artist of the next issue of Birds of Prey and I'm looking forward to enjoying his work on this title and elsewhere.

In closing, this was a top-quality issue I thought – a pleasure to read from cover to cover – and I'm anxious to see how the story-arc concludes next month.