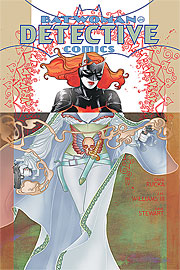 The concept of duality in literature often refers to a contradiction of character, like Dr. Jeckel and Mr. Hyde. In comics we see this all the time with secret identities; Bruce Wayne and Batman being a perfect example. There are also depictions of this with psychopathic schizophrenic villains who, such as Two-Face are two sides of the same coin. Sometimes the dualism is less obvious and can imply a protagonist and an antagonist that are symbolically opposing elements of the same entity; Batman and Joker being my favorite case in point.

Detective #857 screams of dualism: a story that explores both good and evil; a sexually provocative Batwoman and an earthy Kate Kane; a female hero surrounded by older male mentors, but whose existence as a vigilante stems from the tragedy that befell her Mother; an arch villain who may be Batwoman's sister; and finally the most glaring, a comic book with mediocre writing but the most originally creative art in recent comics memory.

In the spirit of this duality I ask myself, "is it possible to like and dislike the same comic equally?" Much like Dustin wrote in this week's previews , Greg Rucka's story leaves much to be desired, but J.H. Williams III's art is so spectacular, an otherwise ordinary book is the pick up of the week.

Rucka's premise while having the appearance of being strange and original is in fact filled with comic book cliches. Batwoman daringly saves her Father, prevents all of Gotham from being poisoned, and in the typical hero tries to save the villain from falling to her death fashion, watches Alice slip through her fingers. Of course we all know she's dead…right? DC didn't even bother building that intrigue. They have already revealed a preview of Alice's involvement in an upcoming title. Even the revelation that Alice may be Kate's sister didn't surprise me. Their connection was hinted at from the start. I think Rucka is doing a fine job developing Kate as a character, but his plot is confusing and filled with holes. I really enjoyed what appeared to be Batwoman's development as a lone driven hero obsessed with a personal tragedy. Who doesn't love that angle, right Bat-fans? But the inclusion of shape shifters as a sub plot seemed awkward and unnecessary. Alice is an interesting villain regardless of her lineage, but the Religion of Crime was too similar to Morrison's first arc on Batman and Robin. I also agree with Dustin that the epic scope of Alice's attempted crime would certainly have gotten Batman's attention. Didn't he say he'd be watching her in the first issue? Also, how do Kate and her Father know of Batman's rule not to kill?

As much as I had issue with the writing, the art continued to blow me away. Take the first page; exactly the duality I was referring to. The panel is ingeniously split between Kate and Alice. Then look at Kate's eyes; the emotion is permeating from her gaze. William's use of brush shadowing is remarkable. I have to give props to Dave Stewart as well for the vibrant colors that could easily be overkill. Then turn the page and see how Williams is able to create a violent tone with elements of desperation from both the villains and Kate's Father. Continue turning and enjoy panel after panel of fluidly flowing, thrilling action. What's even more remarkable is that among the flamboyant designs and incomparable layouts, his drawing of Batwoman's body is so realistically detailed, that it creates another dualism within the art itself. The final scene, which is so unoriginal in its plotting, takes on a Shakespearean presence by the sheer power of the visual. Is there any doubt the best pages in the book are the ones with little or no words.

When I was in high school, my buddies and I would argue over whether the lyrics or the music was more crucial to the greatness of a song. In comics, is it the art or the words? That's a dilemma on dualism that could make for an interesting debate. But I think we would all agree that just like the greatest tunes of all time, the best comics are both intelligently written and exquisitely drawn. Then there are the exceptions…..and Detective #857 is one of them. The duality of my own opinions make it seem that I do both like and dislike it simultaneously. The truth is J.H Williams III has given us such a beautiful vision of graphic artistry, that DC could have printed this wordless, and I would still give it………….