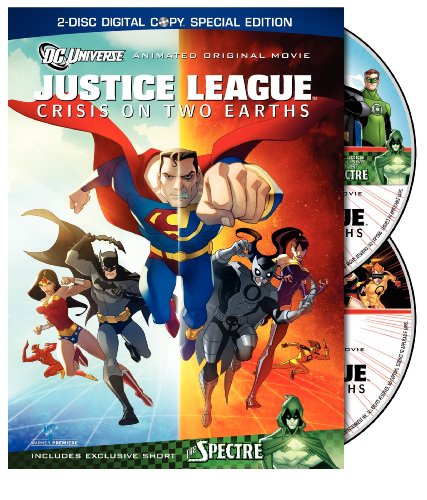 The DC DTV animated movie series has had its fair share of ups and downs. It has put out awesome movies, like Green Lantern, or Wonder Woman, and it has put out very bad movies, like Superman Batman: Public Enemies. So where does JL: CTE, the latest film in this series, sit? Well, it’s at the top. This movie was fantastic!

Before I actually review it though, I want to go into the history of the film. It originally was supposed to be Justice League: Worlds Collide, and was going to be part of the DCAU. The film was intended to be released between Justice League and Justice League Unlimited. It would have served as a bridge between the two series. However, the film never got made, and Justice League Unlimited began, albeit, bridge-less. Now, many years later, the film has finally been released, but rewritten as Crisis on Two Earths. Even though The Film has been rewritten, not much has changed. We get to see the League building the new Watchtower, how the expanded roster came about, and even how Wonder Woman got her Invisible Jet. The only actual difference is that Green Lantern is Hal Jordan, not John Stewart. Other than that, CTE fits nicely into the DCAU, and perfectly fills the gap between JL and JLU.

The story is simple enough, a good version of Lex Luthor, from an alternate earth, comes to the Justice Leagues world, asking the league to help him defeat the Crime Syndicate of America, super powered criminals who have the country’s crime under their thumbs. The League goes to Luthor’s earth to take down the Syndicate, but soon discover a more sinister plot to destroy all of reality. The story is not to complex, but excellent nonetheless. Though the movie is made primarily of action sequences (awesome action sequences), it has some nice character development, especially a subplot involving John Jonzz. Dwayne McDuffie delivers one his best scripts with this movie.

The animation is absolutely top notch. The fight sequences are brutal, and exciting, and just look great all-around. The character designs are very good too. They seem to take some inspiration from Frank Quitley’s artwork on the JLA Earth 2 graphic novel written by Grant Morrison. I particularly liked Batman’s fight with Owlman at the end of the movie. It was one of the coolest animated fight scenes I have seen in a while. I won’t talk about it though; you just have to see it.

One of the things that makes the movie so good is the flawless voice cast. Everyone involved is great, there is no weakness in the cast (can we expect less from Andrea Romano though?) In the Justice league we have Mark Harmon as Superman, William Baldwin as Batman, Josh Keaton as Flash (he was awesome, and had the perfect voice for The Flash), Vanessa Marshall as Wonder Woman, Jonathan Adams as Martian Manhunter, and Nolan North as Green Lantern. From the Crime Syndicate we have James Woods as Owlman, Gina Torres as Superwoman, Brian Bloom as Ultraman, and James Patrick Stuart as Johnny Quick. Also from the Crime Syndicate world is Chris Noth as Lex Luthor. Focusing on Batman for a minute; William Baldwin was great! At first I was a little jarred by his voice, it’s definitely different from Kevin Conroy’s DCAU portrayal. However, as the film progressed, I liked his performance more and more. He is actually really good, and I would like him to return to the role. His last line to Owlman is awesome! Speaking of Owlman, James Woods’ performance is one of the highlights of the film. He was the perfect actor for the role, and it shows! His performance alone makes the movie worth watching!

Also, one more thing I loved; the music. The film is scored by James L. Venable, and though he is new to me, I hope I hear more of him soon. His score was very good, and had a big budget cinematic feel.

So all in all, I can’t say enough good things about his movie. It’s certainly the best of the DC DTVs, and I highly recommend that you see it.