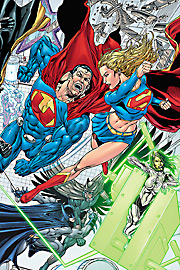 The issue starts with Supergirl and Jesse Quick racing around the Monitor, doing chores and talking about losing loved ones and fate, when they are visited by a woman claiming to be the Green Lantern of her world and in need of help. Jade is then seen talking to Faust about the Starheart when she is alerted. And then we see Dick sparring with Donna Troy who assures Dick that her bottom line is that now, even though she sees no difference at the end of the day between her Titan days and the JLA, she’d follow Dick’s leadership to the depths of hell. When Dick answers the call, he quips that this just might be that thing that drags them to hell!

The League meets up, sans Congorilla and Starman, Bill is seen looking for Starman in Opal City, at the JLA Hall in Washington, DC. The Green Lantern starts telling the story of her dying world, Donna Troy then interjects to discuss the multiverse. Funny aside, Donna mentions that she had the adventure, seen in the series 52, of going through all of the multiverse with Kyle Rayner and Jason Todd. When she says Jason’s name she says “The Red Hood to you guys.” Dick responds, “Yeah, I think I’ve heard of him.”

The Green Lantern returns to her tale by saying that the Crime Syndicate of Amerika had come to her world after theirs had been nearly destroyed by a doomsday type of device that spreads a toxic dark “thing” across it. They had brought it to her world but it could not be stopped on theirs, so they’ve come to the JLA’s earth to find the body of Alexander Luthor. Just she says this, the CSA arrives and the fight is on!

Naturally the “opposite numbers” match up with Jesse Quick battling Johnny Quick (no relation to Jesse’s father), Jade versus Power Ring, Batman versus Owlman, Donna Troy versus Superwoman and Supergirl versus Ultraman.

While the fight is going on, we get a flashback to about an hour ago with Owlman and Superwoman are in a South American treasury reserve talking about maybe its best to stay on this world, and assume that Ultraman doesn’t really care about saving their world anymore. Owlman though is still not convinced, and wants to go on with his plan. Power Ring comes by and tells them that he has located the Green Lantern, and Johnny Quick tells them that she is at the JLA headquarters. They then all decide to take the fight to the JLA, and Owlman contacts Dr. Impossible about a machine that needs to be ready now.

We switch back to the fight and Dick notices that Owlman is no longer involved in the fight, and he goes to pursue him. Jade provides cover for Dick as Power Ring tries to stop him, but doing so it seems Jade goes over the edge and starts to drain Power Ring’s ring power.

We then cut back to about an hour earlier, where Dr Impossible is preparing a group of villains for the machine that Owlman wanted to be setup.

This story was intense and big enough for a good, old fashioned JLA story, but it does leave readers confused about what was going on. Who is this Dr. Impossible? Who were his minions and why were they hoping that it’d be Darkseid that was returning? Who is this Omega Man? Too say nothing about the reading up one would have to do to understand the relationships and the context of the Crime Syndicate. And on top of all that, wasn’t Grant Morrison’s Multiversity series supposed to sort this out before stories like this started to appear in the main DCU? Yeah, Grant, maybe you could have waited on Bruce’s return for a while longer and focused on setting up what exactly is going on with the new, improved, DC Multiverse?

Now, I like complex stories as much as anyone, but this did need a road map to figure out who some of the characters were, and what exactly was going on. Heck, at least give us some of those classic footnotes, you know “*See X title, issue X to know what we are talking about here.” And that falls on the feet of Eddie Berganza and his two associate editors on this title.

Another gripe I have is, much like the previous JSA crossover, it seems more focus can be spent on whom the JLA is up against, as opposed to the new JLA themselves. James Robinson in interviews and panel appearances seems very gun-ho about this lineup and in the scenes at the beginning you can see he is trying to drive home the points about this team being like a family and that this is it, this is YOUR Justice League of America. However, the past two stories seem to be driven by members of other teams and things that take the focus of the book away from the burgeoning new JLA. This cannot be a good thing if Robinson wants his version of the League to stand up alongside the classic roll calls of the past.

Well, even though this was a pretty entertaining tale and a good opener to the story arc, the problem s I had do take away from the overall grade.