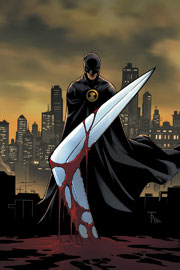 Red Robin is finally over, after twenty six issues, we have reached the end of Tim Drake’s journey as his own man as Red Robin.

Only, do you think anyone took the time to tell the creative team that this was the last issue?

The main premise of the issue is Tim is finally going to take out Digger Harkness, AKA Captain Boomerang #1 who at the end of Identity Crisis died while murdering Jack Drake, Tim Drake’s father. Digger came back during the Blackest Night crossover as one of the resurrected characters and with the end of the current DC Universe, I best just describe good old Captain Boomerang’s story from Blackest Night to present:

Digger is in prison, and talks to Barry Allen, The Flash; they share small talk about the film The Shawshank Redemption before Barry leaves. Next Digger is introduced to Tim Drake, the son of Jack Drake, the man who Digger killed just before he died himself in Identity Crisis, nothing really comes of this, just foreshadowing for this issue.

Digger breaks out of Iron Heights prison during an incident and finds he can create boomerangs from thin air now, and is told by the White Lantern that he needs to throw a boomerang, and he will know when the time is right.

Brightest Day #23-24 come and Boomerang decides to kill Dawn Granger, the female Dove, but her boyfriend Deadman, moves in the way, and is killed by the rogue and his boomerang, before Digger runs away, with his “Life restored” by the White Lantern.

Did you need to know any of this information? Not really. To be honest, it’s all a bit convoluted and complex for what is ultimately just a plot device used twice with what could be an interesting character. Digger was only used in Brightest Day to be the man to return the pre-Blackest Night status quo by killing Deadman again, who was also brought back to life at the end of that series, and the idea that Tim Drake would want to get revenge on the man who killed his father is interesting.

In this issue Tim talks us through his final plan, which involves Digger’s greed coming back to haunt him, by having a low life criminal tell Digger about some leftover Black Lantern energy, which can in theory bring loved ones back to life. Digger sets out to find this energy and has to ask a fellow rogue for help using a freeze weapon, he’s in Gotham, and so he turns to Mr. Freeze, and offers him the chance to bring back his beloved wife Nora.

When the fake Black Lantern energy fails to produce anything, Mr. Freeze pulls his gun, and Digger responds in kind, with a boomerang. Tim wonders if this is what his father would truly want, would he want Tim to commit murder. He may not be pulling the trigger, but he might as well be. Tim sets off a flash grenade that he planted just in case something went wrong here, and he quickly takes care of Mr. Freeze and goes after Digger.

Digger throws some boomerangs at Tim, which Tim easily side steps, and of course, Digger Harkness is one of the foremost people with a boomerang in the DC Universe, and if it wasn’t going to hit a target, it was damn sure going to come back to Digger and knock him off the roof.

Tim wonders if he can let Digger go like this, it wouldn’t be his fault, Digger would be causing his own downfall. But after second guessing that opinion, Tim realizes he can’t let that happen and instead catches Digger and makes sure he goes back to Iron Heights prison, which is the Flash’s rogues prison. Batman may have Blackgate, The Flash has Iron Heights. Tim speaks to both Dick Grayson and Bruce Wayne’s Batmen, and he is asked if he truly wanted to kill Digger. Tim says he wasn’t going to do that, not on this night. Bruce says to Tim that saying tonight is all well and good, but what will Tim do if he’s given the chance to kill Digger tomorrow night? Tim stands silent. He cannot answer, and can’t say he won’t kill Digger if he gets another chance.

Tim ends the comic talking about how he feels like Gotham is his city now, not Dick’s or Bruce’s it is his to run how he wants to, and if he wants to. The only question is, is Tim up for the task of being Gotham’s superhero leader, and does he want to do that. Tim leaves us wondering what his choice will be, and with the DCnU coming into effect in just 21 days, I don’t think Tim really has a choice in the matter. And so ends Red Robin, and after twenty six issues my run on reviewing the book for this site.

The art in this book by penciller Marcus To and inker Ray McCarthy as always is fantastic, this team seem to gel so well together that they constantly make the book a joy to look at, and everything month, the covers looking interest and almost popping off the shelf in comic shops.

Fabian Nicieza has ended his fourteen issue run on the book now, and he has consistently provided an interesting book, I may not always have enjoyed the issues, or agreed with the direction of the book, but my major complaint is this book does not come across as a conclusion to Tim Drake’s story. This book just feels like it is just one issue short of its proper conclusion, and that is how I am always going to view Red Robin now, a book that could have offered so much, but will always be, just one issue short of something great.