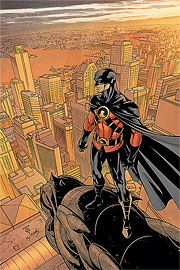 Red Robin #6 marks the debut on the series of artist Marcus To and inker Ray McCarthy on both the cover and interior of the book replacing Francis Manapaul, who handled the covers, and Ramon Bachs, who did interiors, respectively. The fact that this is the second issue in a four issue arc, and the art team has been changed is not a thing I like to see in the middle of stories, even if it is getting rid of Bachs distinct change from Red Robin to Tim Wayne/Drake/Alvin Draper whatever the hell he calls himself these days.

The issue opens with a flashback to Panama city, and Red Robin telling us what Vitoria, the woman attacked by hundreds of spiders last issue, has been doing with her time, she’s been going all around South America killing random people just because she can. After that page on Vitoria, we have more Tim narration talking about looking into the files of the league and how they don’t pay taxes; did anyone want to know if a super assassin empire paid taxes? Me neither. Tim talks about how he set a trap to catch a member of the Council of Spiders, and how a spider fell into his trap, and now he is going to fight this poor man wolverine, right after we go back fourteen hours to Tim using a computer in one of Ra’s Al Ghul’s hideouts.

This scene is basically showing that Tim is now in way over his head, with bad men you just don’t want to mess with. Tim is reminded by Ra’s right hand man, White Ghost that when the league gets the Council of Spiders, they are going to kill them, much to Tim’s horror, for some reason. Why he wouldn’t think a group called the League of Assassins wouldn’t kill their enemy, I will never know.

Back to Tim fighting Wolverine, I mean, no let’s be honest, it’s Wolverine, Tim spends most of the fight standing about stopping people from hitting Wolvie until everyone faceless grunt on his team except his beloved Pru, is dead. Cut back to Panama City before and Vitoria meets a man from Ra’s league of assassins, who says he can bring her in, she decides to kill him instead, and then says to herself “Assassins” and that’s the last of her for this issue.

Next we have a two page scene with Vickie Vale in Lucius Fox’s office, looking for Bruce Wayne to interview, Bruce, who is really Tommy Elliot comes in and whisks her off to dinner, care about this storyline? Yeah, me neither. Back to Tim fighting Wolverine, now that Wolvie is tied up, Tim tries to play good cop, to Pru’s silent bad cop, telling him “Talk to me. Please. If you don’t talk to me the league takes over and you don’t want that” so Wolverine talks and tells Tim that this was only “One” of the hits, Tim finds out that only did he cause the deaths of many of Ra’s other men, but may also have caused Tam Fox to be killed by an eight foot Man-Spider. Yes, you read that right, Man-Spider, I’m not going to say it the other way, cause the other way makes it sound better than it is.

Right, somewhere in there is my synopsis of the issue, now to say what I think, first off, we jump around way too much for my liking, lets count how many jumps we have, page one is a scene about Vitoria, the crazy spider lady, page two has three, one in London, one in Athens and one in Budapest, next we have the Ra’s lair fourteen hours ago from, then back to Budapest with Red Robin for two pages, then Panama city with Vitoria before, back to present but in Gotham city, back to Budapest for a few pages of boring pages of Tim saying “This is all my fault…..I miss my daddy” Vitoria in a pointless page telling us what she killed a man and then finally Budapest followed by Ra’s lair again.

If that seemed like a lot to take in, well it was, there was so much going on in this issue, and so little to care about, that you can’t and not be able to follow the narrative. Yost’s writing here is distinctly average, it felt like when coming up with this issue he realized the main story of Tim fighting this cheap Wolverine knock-off was dull so he added his beloved jump around to try and throw the reader around so much that at the end they would feel like the read something interesting, well it wasn’t. The pages involving Tim talking about all the deaths he caused and what he found in Iraq and the black lanterns felt so forced to me, I was actually hoping Yost would throw me one of his cut always. The ending did not give me that “Oh my god! I need to get the next issue!” moment, it was more like “Oh, would you look at that…..a spider….man” as I put the comic down to clear my mind of it. This whole issue makes me want to say to Chris Yost, that, if you spent half as much time writing an interesting story as you did give me pointless flashbacks then you would have an awesome story. Also, I am really getting sick and tired of all the jumping around that Tim is doing around the world, Tim should be given a city he can call his own, like Nightwing had Bludhaven and be able to operate out of there, and not all the world traveling that he has been doing, because along with the flashbacks and jumping around, that’s getting old fast.

The art by Marcus To and Ray McCarthy is reasonable, it’s nothing I’d write home about, the cover was the best part of the art, and the greatest thing I can say is that at least now Red Robin looks like he could be Tim Wayne, instead of two different people. Mostly the art is just regular comic art, it looks and feels like a regular comic, that when you are done reading, you’ll put away and never look at again, because the art is average this isn’t a comic you’ll go back to because of the writing either.

So all in all, a pretty average issue, there were some flaws with it, such as the man-spider and all the jumping around, and Tim being whiny and unlikable for most of the issue. Yost has promised that the flashbacks will be ending soon, which would be nice, but the real question is, when they end, will their still be a comic left when that time comes. To stick with the site ratings, I’ll give this a two and half, for my own personal scale, I’d say this comic has 50p bargain bin written all over it.