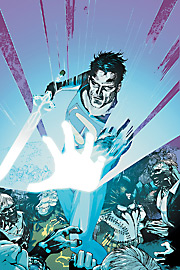 Superman and Batman return for the second part of Cullen Bunn’s “Sorcerer Kings” and things are no less “phantasmagorical”. (His words not mine.)

If you remember, part one left us in what looks like a fantasy future, a groggy Superman awakens to find his self transported to a surreal Metropolis of the future where magic and mysticism rule. It’s all Batman’s doing but of course no matter what the iteration of the Caped Crusader, it’s all part of the plan.

Now, like many multi-issue or multi-chapter storyline, time has to be spent on exposition as well as some action to garner interest and some “reveals” to propel the story along. Fortunately we don’t get too much exposition from Bunn as he is taking it for granted we have all read the first chapter of this extravaganza. Hence, we jump right into the action as Batman, Detective Chimp and Doctor Occult are investigating how this whole mess started. It’s important to note that there are two parallel storylines going on here. The first takes place in the so called “present” and the second in the far flung magical future.

This is not unfamiliar territory for writers or readers the trick (no pun intended) is to make it work. And to make it work you must introduce a bizarre end point at the beginning of the story and then retrace your steps to see how it all unfolded.

So, as I was saying, Batman and his allies are trying to get to the root of the problem. Not much detective work is required here as Batman storms into the hideout of the lackey’s and basically start throwing his fists around until he finds out what he needs to know. A few magical curve balls are thrown his way but like I said Bats is swinging and mostly hitting. (If only this years Red Sox could do the same.)

What he learns and reports to the Chimp and Doctor is the “MacGuffin” that will propel our story along. Said MacGuffin is “The Final Spell” which is the ultimate ritual. And how do you make this work? You must travel the “Witches Highway”.

This being introduced, we the readers now find ourselves transported to the magical future where future Batman is explaining things to “past” Superman. It’s a nice transition and is well placed. As readers, once we learn something crucial to the storyline we are best served by seeing the outcome without knowing what’s happened in between.

So what happened? The Sun was murdered!

Future Batman tells us of the machinations of the worlds’ most ruthless mystics, Felix Faust, Blackbriar Thorn, Brother Blood and Morgaine Le Fey. It seems the only way to “cast their oppressors into eternal torment” is to darken the sun. Unfortunately, the efforts of Earth’s mightiest magicians, while managing to reignite the sun destroyed all mankind’s technology and left us under the thrall of a new supernatural sun. (Wouldn’t you know it, and I wanted to go to the beach more this year.)

Time for the action sequence! As Batman spins this tale our gallant group is set upon by The Creeper and his gang of “Grundy’s”. Now, we may see this all as simple filler, something to keep our interest and allow our heroes to punch their way through the enemy. But Bunn uses this sequence cleverly. We get to see a change in Superman and a cunning twist to one of Batman’s favorite vehicles.

As the fight ensues it is not all going well for our heroes because Superman’s powers have been altered due to the magical sun and they are being overwhelmed. Batman blows a whistle to call for the Batwing. But this Batwing is not a mechanical device that Batman can fly around in like a jet fighter. This Batwing, in a nice twist, is an actual dragon that breathes blue fire and helps even the score. Still, things are just even and the battle hangs in the balance. Bunn now introduces his last twist of this chapter and has Superman wield a magic sword to decimate the enemy.

What better time, now that our mouths are hanging open, to return to the present for a little exposition as Batman, The Chimp and Doc follow a trail to Cullen Bunn’s last major reveal to end this chapter. And that reveal is a new character, “Klarion the Witch Boy”! (Maybe it’s my imagination but Klarion looks like a cross between Prince and Lady Gaga.)

So there we have it. The Batwing’s a dragon, Superman is dead in the past but alive in the future where he wields a magic sword there is a whisper of a new “league” in the future and the love child of Prince and Lady Gaga confronts us.