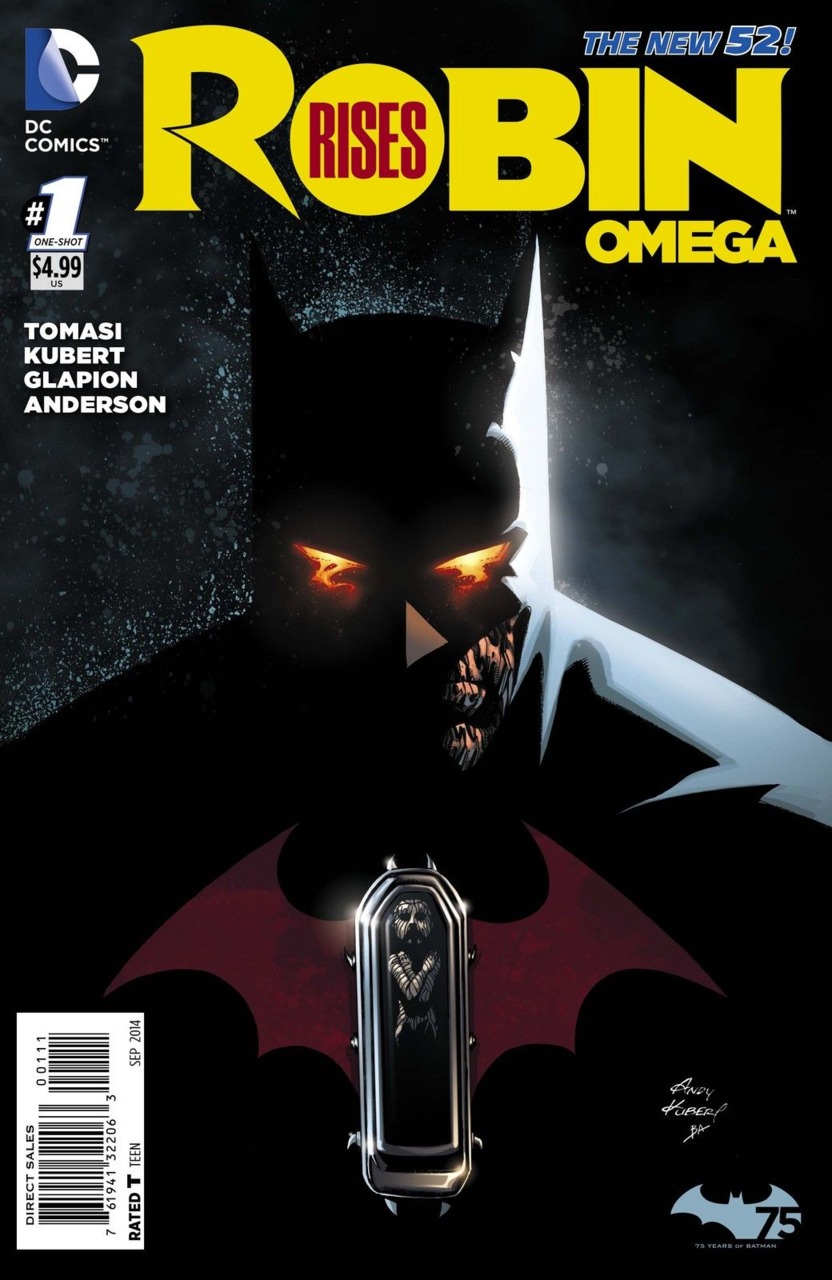 I’m going to start out by advising you, if you’ve been interested in the Batman & Robin title, but haven’t been sure where to jump in, start with this book. The focus is shifting back to the boy so many of us miss, and hints about him coming back. It has a seven page recap that catches you up to speed nicely, and also explaining some of the events before the New 52.

Peter Tomasi delivered one of the most memorable issues since the New 52 began, with the silent issue for Damian. But since that issue, he’s kinda fallen off track, and has delivered issues that have been just decent. I feel like this is the beginning of him getting back on track. This is the start of new epic story from this guy. I recently watched a DC All-Access interview with Tomasi, and it was nice to see him talking about what he has upcoming. He mentioned that he also has an eleven year old son, and talked about putting himself in Batman’s situation. That’s pretty neat to think about… How often can a writer connect with Batman on that level? Has this even happened on this degree before? Tomasi is literally thinking, ‘This is how I would probably react if I lost my son.’ And I think that’s a beautiful aspect to this story.

Andy Kubert (pencils), Jonathan Glapion (inks), & Brad Anderson (colors) are on art duties for this issue. If you love Kubert’s art (this guy does), then here’s another reason why you should pick up this issue. It looks freaking great. There’s not much else to say.

We start out with a seven page recap covering both Grant Morrison’s run & Tomasi’s with Damian. It’s a nice way to catch up, and the guys on art give it a flashback feel by using less ink &/or no inks at all, and using a softer color palette.

Now we get to the present… Glorious Godfrey, his Parademons, & fellow Apocalyptians have interrupted a fight between Batman, Frankenstein, & their Yeti’s vs. Ra’s al Ghul, his ninjas, and ninja Man-Bats. Godfrey is demanding the Chaos shard from them. Batman has no clue what they are talking about. But Ra’s admits that he placed it inside Damian’s tomb. Godfrey decides to take the tomb, and we get a team up of Batman & Ra’s!

We get an awesome fight scene. Craziness all around. We see Batman do whatever it takes to keep Damian by cutting the arms off of a Parademon with Frankenstein’s sword.

The Parademons grab the caskets as well as Frankenstein, and fly off with them, but Ra’s and Batman are attached to the caskets. Frankenstein sacrifices himself, taking down a few Parademons. Ra’s is shot by a beam from a Parademon, and falls into a crevasse along with Talia’s tomb. Batman blinds his Parademon, and they crash into the snow below.

He finds the Chaos shard, and remembers that Superman destroyed the Chaos crystal on their short time on Earth 2. It also seems that he sees into the future where Damian saves everyone. Is this the 666 future, or something else? As of now, it’s impossible to know for sure.

Godfrey shows up, takes the shard, and is about to kill Batman… When he’s saved by Captain Cold, and the rest of the Justice League… The new Justice League. Another brawl ensues, and Godfrey decides to leave, as they have what they want, the shard and Damian’s body. Batman grapples onto Godfrey, but Shazam snaps his line, thinking he’s saving Batman. Batman is upset by this, obviously, and beats Shazam up. The team thaws Frankenstein from the ice. And without the team’s permission, Batman declares that he is going to Apocalypse & is bring Robin back– ALIVE!

Looks like we will be getting Damian back — YAY!

I love this, because really- it’s a story of what a father would go through for his child.