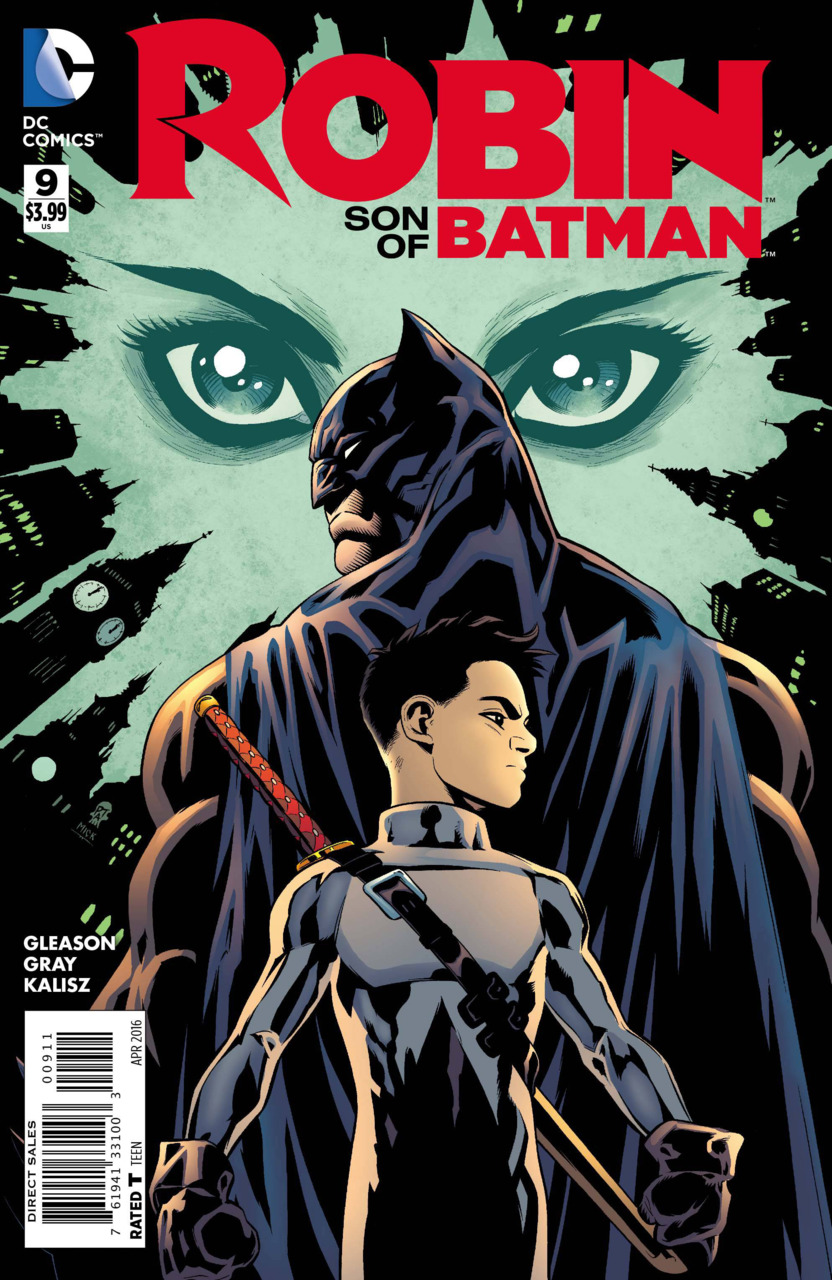 As the issue opens, Robin is watching several kids playing on the former giant penny and T-Rex outside the Lucius Fox Center for Gotham Youth…one child ends up falling, but is caught by none other than Bruce Wayne. As Julie comes to Bruce’s side, we cut to a scene where Robin perches over Bruce as he sleeps through the night. Realizing that he is truly alone, Damian vows that Batman’s legacy will not wane with his absence.

Cutting to Gotham Harbor, Robin is busy battling against a slew of Batman pretenders. Successfully capturing the group of Z-Listers, Robin is caught floating over the bay in a parachute. Looking down into the water, he notices a series of lights deep below…eventually he realizes that this was the spot where the Bat-boat sunk and Nobody was killed.

Diving into the water, Robin comes across a duo who are busy destroying the sunken boat. Turing their attention to the Boy Wonder, Wunderfox and Snowfox begin attacking Robin with their sonic weaponry. As Robin begins to hallucinate due to the attack, Goliath suddenly appears and attacks the villains. Grabbing Damian and flying to the surface, Robin thanks his old friend for the rescue. The two foxes come to the surface as well and inform Robin that they are trying to bring Maya back into the fold as Nobody. The two depart before the heroes can apprehend them.

Later on a rooftop, Damian pulls off his Robin logo and looks at a video feed of Maya…happy and out of the dangerous life he leads. Realizing Goliath must have followed from Bialya, Damian and his friend vow to protect one another and become a new dynamic duo. Arriving back in the Batcave, Damian introduces Goliath to Titus, Pennyworth and Batcow. The issues closes with a great shot of Robin surrounded by his pets and announcing that they have plenty of work to do.

Another great issue by Patrick Gleason who returns after last month’s hiatus. First off, the cover is a great homage to “Batman & Robin” (Vol.1) #22…right down to the creepy eyes in the background. I’m wondering if we are meant to make a connection between this new storyline and the former. This cover was final issue of a story that saw Batman (Dick Grayson) and Robin battling against a villain known as the White Knight. Maybe he is the unseen foe that was directing Wunderfox and Snowfox? It’ll be interesting to see how this story unfolds and whether the two foxes will reappear.

I loved the return of Goliath and his addition to Damian’s other pets within the Batcave. I think it would be awesome for Robin to go on patrol with the likes of Goliath and Titus…however I’m not sure how Batcow and Pennyworth (the cat) will be able to do anything of value, except some comedic relief.

It’s also quite obvious that the end goal of the antagonist is to bring Maya back as Nobody…so it will be intriguing as to how/when this will happen. I do like that Maya has found some solace and happiness and isn’t so concerned about avenging her father. However, I definitely think that we will see Nobody return at some point to aide Robin in his battles.