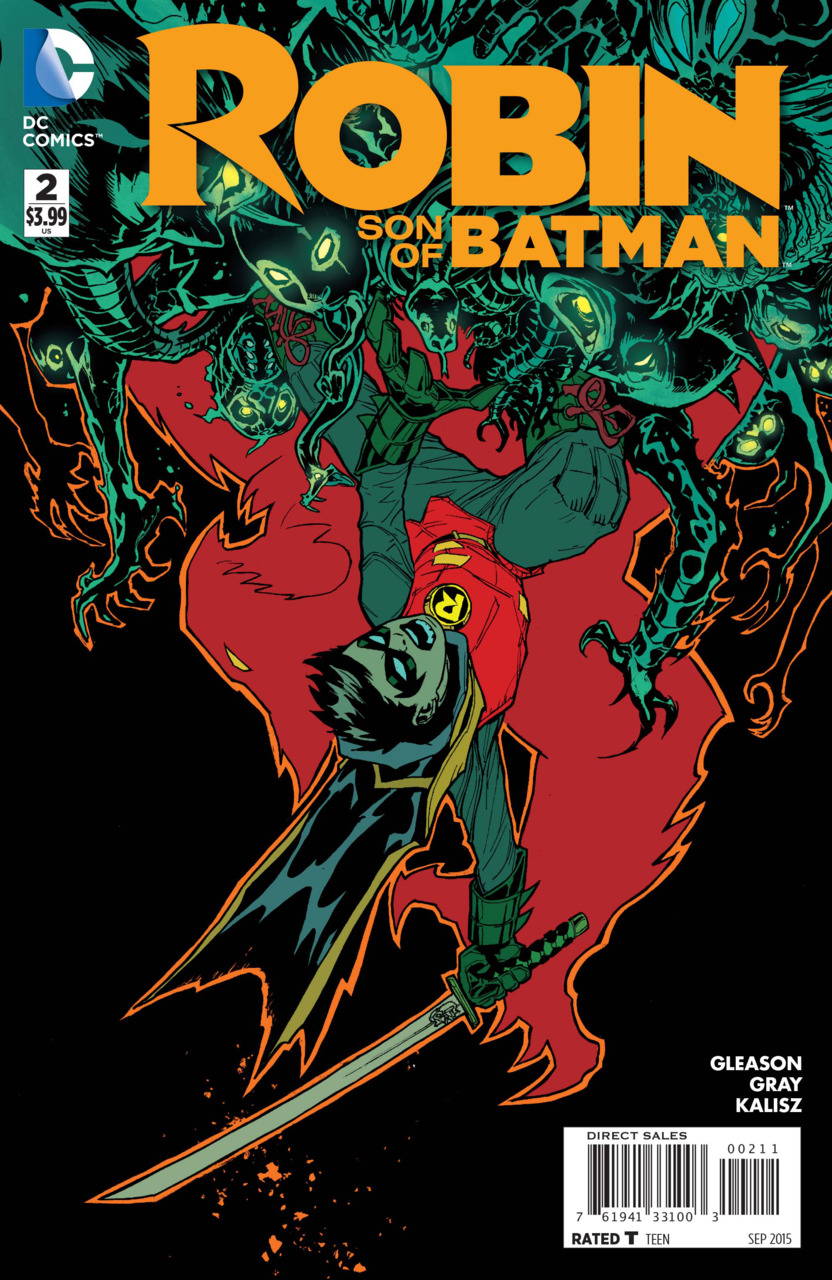 Opening up in flashback, we see Damian and his mother Talia sparring with kendo sticks. As Damian seemingly beats Talia and gloats, she quickly gains the upper hand and reprimands him for not immediately going for the kill. The two discuss Damian’s training and how it is nearing completion – his final test awaits, The Year of Blood. We then see a ritualistic ceremony where Damian is clad in a cape and hood and has a blood smeared domino mask across his face. Ra’s presides over the ceremony as we see green fire burning in Damian’s eyes.

Cutting to the present, Damian and Goliath arrive in South America carrying a large stone statue head…previously seen (and discussed) in the last issue. As Goliath places the head back on top of a large decapitated statue, the villagers rejoice that their guardian has returned to them. As the head locks into place, the statue comes alive and knocks both Robin and Goliath to the ground. Summoning the were-man-bat into battle, Goliath clashes with the stone guardian. Robin meanwhile unsheathes several swords and begins dodging massive fireballs shaped as dragons.

With our heroes busy battling the guardian, the invisible form of Nobody appears on the scene and notices several villagers about to be crushed by falling debris. Leaping to their aide, Nobody saves the endangered people. Captured in a magical force field, Damian witness Nobody’s camouflaged leg come into contact with him and become visible…breaking free the two attack the guardian. Realizing who she is, Robin and Nobody begin to banter about the death of the original Nobody and what Damian is doing in South America.

Flashing back to the first day of the Year of Blood, an assassin clad Damian is set to lead a contingent of the League into stealing an ancient treasure guarded by the stone guardian. Ordering his men into battle as a distraction, Damian sneaks into the temple to claim its treasure. He finds a glowing black/green sword that he pulls from a stone and decides to keep as his own. Leaving the temple, Damian beheads the stone guardian and leaves with his treasures in tow.

Back in the present, the local (corrupt) militia arrive to stop the guardian, while Robin and Nobody spring into action to stop them. Realizing their good intentions, the guardians turns the evil militia into stone and decides to allow Robin and the others to live. Robin tells the guardian that he will return the sword as soon as possible, but the stone centurion states that the sword was not the true treasure…it is buried far deeper than Damian ever ventured. The issue ends with Damian and Nobody arguing about the intentions Robin has about making up for his actions during the Year of Blood…and Nobody agrees to join him.

Well I have to say that I am really enjoying this Damian story brought to us by Patrick Gleason. As seen in the previous issue, Damian is setting out to right his wrongs that he instigated during the fabled “Year of Blood.” I liked that we got to see some of Talia and Damian’s relationship and flashbacks to how this whole “Year” started off…however I am a little concerned that each issue is going to get repetitive – show off a flashback where Damian steals/kills/entraps/battles something, and then shows up to fix what he did. Hopefully this won’t be the case and will lead to something bigger and better.

Although I quite liked the issue and the battle sequence with the guardian, I am a little confused about Nobody’s motivations. In the Sneak Peek and issue #1 it seemed that she intended to make Damian pay for the death of her father, however now she agrees to join him? Although their discussed the events, it seems rather odd that she should willingly decide to aide someone she clearly despises.

Overall this was a good story that propels Damian further down a path of redemption…and I definitely have come to believe that these events must be running parallel to the events of “Batman Eternal” and prior to “Endgame” due to the absence of Damian from those stories, as well as Robin not even acknowledging the death of his father.