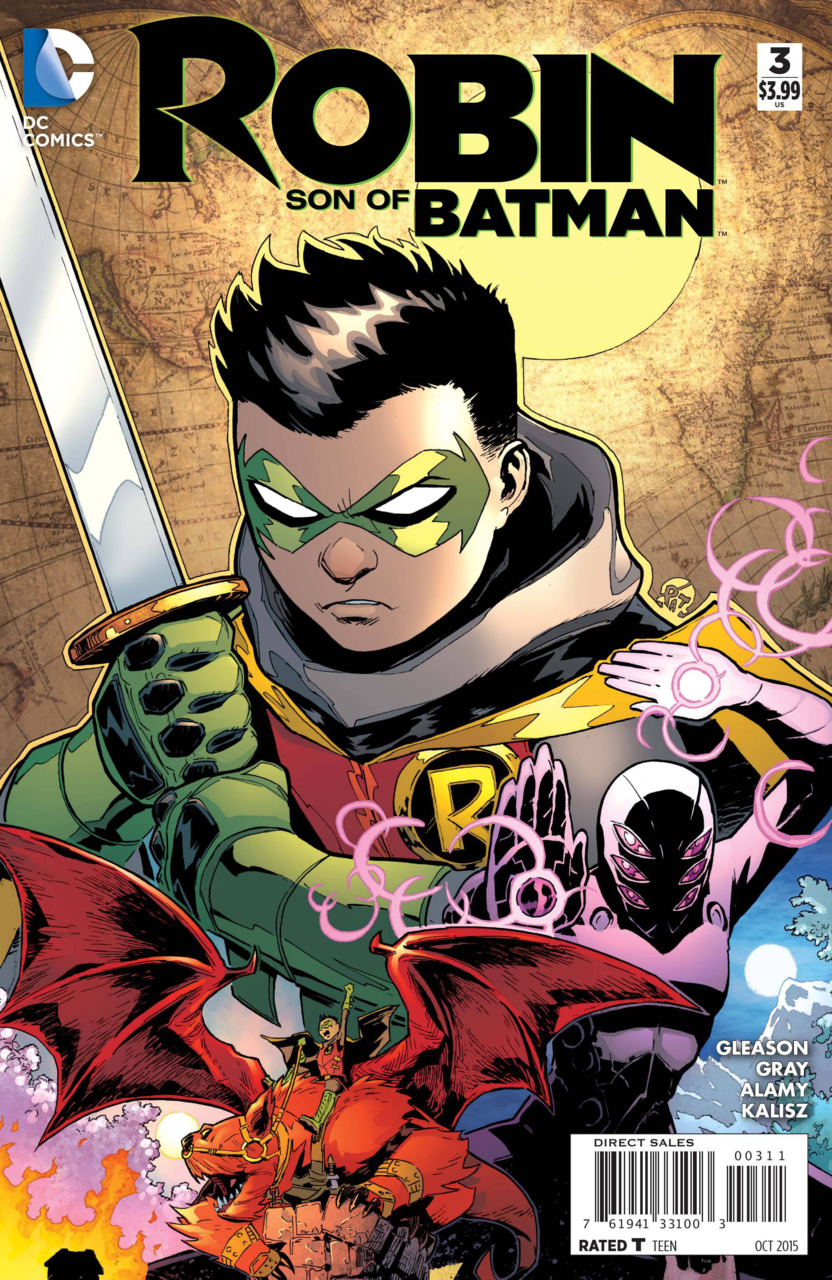 As this month’s issue begins, Damian is hard at work tinkering with the whistle that will eventually be used to control Goliath (this is a flashback you see). As Damian activates the whistle, the bats overheard screech and shriek at the noise. Later on, Damian departs on another mission during his Year of Blood…after the young man’s departure, we see one of his servants being attacked and seemingly executed for doubting Damian.

Cutting back to the present, Damian, Goliath and Nobody are in a heated battle against an unknown enemy riding giant birds…that’s right, birds. As the trio attempts to return a glowing green crystal, Robin and Nobody seem to be arguing over who is at fault for alerting the natives to their presence. As Damian attempts to adjust the bat-whistle to direct Goliath, a stray arrow shatters it into pieces. Realizing the trouble, Damian attempts to throw the crystal overboard…however, Nobody steps up and uses her own built in sonics on the were-bat. Shooting off in another direction, the green crystal is seized by of the tribe and falls away as Robin pushes him off.

Crashing into the ground nearby, Robin and Nobody come to blows as Damian blames her for fouling up their mission. Fighting each, the Boy Wonder and Nobody attempt one-up each other, but to no avail. Nobody suddenly punches Damian in the face, knocking out one of his teeth…turning around, he can be seen laughing. The moment is quickly interrupted as a rampaging Goliath knocks them over…with a little encouragement from Robin, Nobody uses her sonics again and lulls the beast to sleep.

Staring out to sea, Robin and Nobody discuss the training that each earned under the original Nobody…except that Maya seemed to be unworthy of her father’s teachings. Apologizing for knocking out a tooth, Damian retorts that it was loose anyways…to which Maya doubles in laughter, realizing that Robin still has baby teeth.

As the two board Nobody’s vehicle, Maya receives a communication from an unknown source…someone looking for the original Nobody. It concerns a job that Nobody and the unknown person were in the process of doing. Believing that she needs to live up to her father, Damian states that she needs to do what she believes is right.

As the scene changes, we see Talia being awakened by an unknown, robed person. The robed figure seems to be uses globs of colored, magical water to manipulate Talia’s memories to reveal the presence and name of her son. Stating that he is a member of the Lu’un Darga, the robed figure seems to be a victim of Ra’s Al Ghul, the League of Assassins or some other event during the Year of Blood. With a little more persuasion, Talia eventually gives Damian’s name…but suddenly grabs a stalagmite and attacks the robed figure. Departing the cave in which she resides; Talia emerges in a large domed area that she seems to recognize…the Dragon’s Pit, the Lazarus heart. As many creatures shout the name of the demon, Talia swing a sword towards and them and bellows her father’s name.

Back with Damian and Maya, the young Ducard decides to remain with Damian and help him atone for his actions. As she types out a response that states “I quit,” on the other side of the world the unknown person receives her response. Stating that nobody likes a quitter, Deathstroke raises his rifle over his next victim.

Continuing the trend of Robin helping out the victims of his Year of Blood, this issue shows the origin of the whistle that seems to control the giant were-bat Goliath. I am definitely intrigued at the origin of this creature…where exactly did the League find him? Did Damian free him from somewhere or was this another of things he took or helped release during the Year of Blood?

Another question I find myself asking is how long is this story going to unfold…although we have had three issues so far, it only continues to ramp up as Robin and Nobody find common ground with each. Although I believe this story to running continuous with “Batman Eternal,” I find it harder to see how this book will be able to remain apart from the other Batman books…especially with the upcoming “Batman & Robin Eternal” and “Robin War” story arcs.

I liked that we got a bit of development with Nobody…and the fact we got her actual name – Maya Ducard. Although I found her a bit whiny in previous issues, and questioned her motives, I liked that we got some insight into this character and why she seems to be helping out the Boy Wonder.

We also see a return of Talia and who kidnapped her at the end of the first issue of this series…although it was a little vague on who had her, it seems that there is a big enemy underfoot and will eventually clash against Robin and his allies.

Lastly, the final panel introduces a new foe which will probably cross paths with our heroes in the next issue(s). Deathstroke is definitely a great villain and powerful foe…a threat worthy of the one trained by Ra’s Al Ghul and Batman. It will be interesting to see how Damian will take on this foe, as I believe that this is will be their first encounter.

Overall I really liked this issue, Patrick Gleason’s art and writing continues to stay strong despite the double duties…I look forward to this series every month and am eagerly awaiting the confrontation between the Terminator and the Boy Wonder.