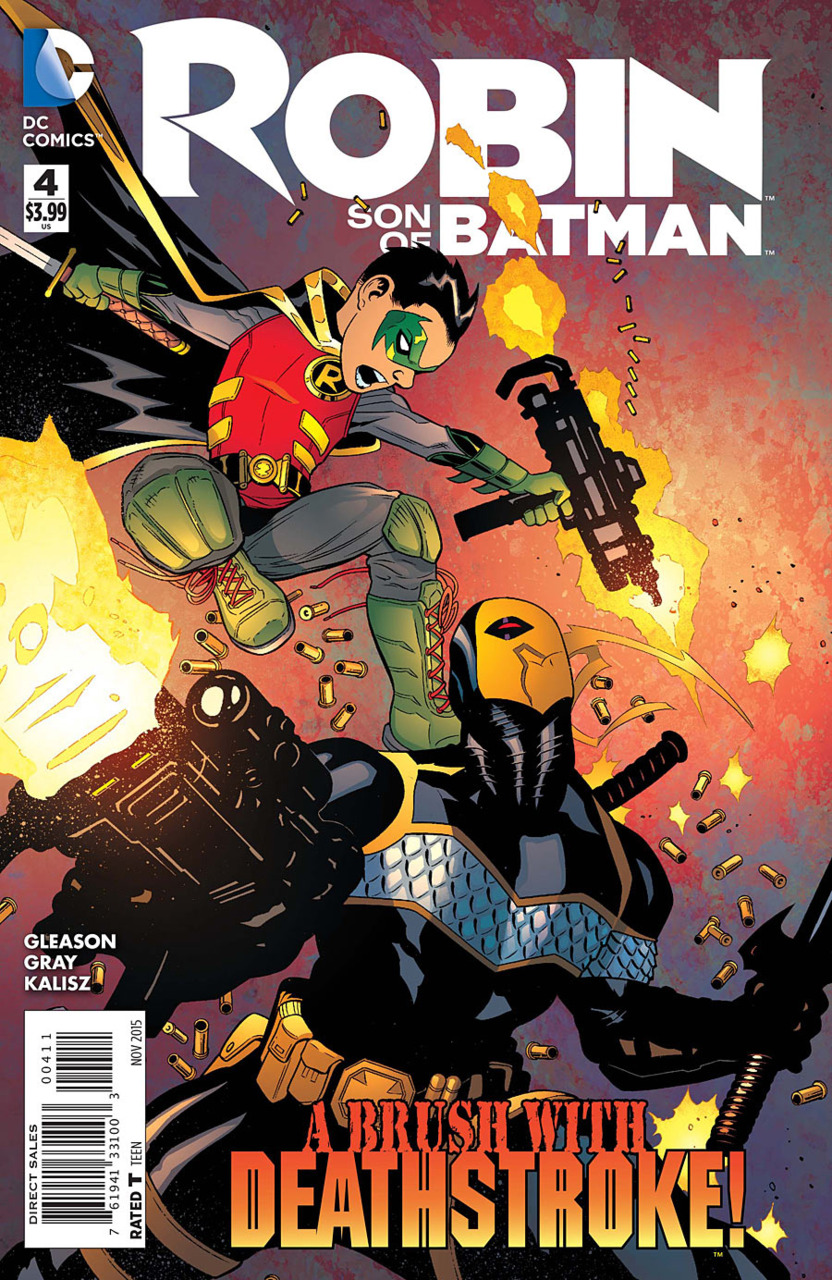 Opening within a flashback, Damian is seen being taught how to paint by Ravi. Returning back to the monastery to collect more paints, Ravi accidentally stumbles upon a room where Ra’s Al Ghul is shown bathing in blood. Realizing his folly, guards quickly apprehend him and bring him before Talia and Damian. Given a choice to punish him or not, Damian chooses the former choice and it is shown that Ravi is blinded when a green powder blows into his eyes. Cutting back to the present, Ravi can be seen touching Damian’s canvass painting and calling it beautiful…meanwhile a saddened Damian looks on as he realizes he will not be able to make up for his mistake.

Descending upon a city in Egypt, Robin and Nobody take out several armed guards as Goliath lands at the entrance of a tomb. Explaining that during the Year of Blood, he had stolen several canopic jars, Damian descends into the crypt to replace them. Robin also explains how he intends to donate five million dollars to the former researcher who was inspecting the tomb and had abandoned his work after Damian had taken the jars and apparently cursed the site.

Tumbling down the tunnel, Goliath startles the two heroes as Nobody rushes to his rescue…intending to eat several crabs for dinner, the crustaceans had gotten the better of the were-bat. As Robin departs, Nobody is surprised (again) by what looks like a paint grenade that covers her camouflage costume…Deathstroke has arrived to investigate the original Nobody’s disappearance. Engaging in battle, Maya is quickly apprehended and tied to a massive column. As Goliath jumps in to protect her, Deathstroke detonates the base of the column which forces Goliath to catch the tumbling object. Threatening to kill the creature if Nobody doesn’t cooperate…Robin suddenly intercepts the villain and attacks him. Fighting fiercely against the Terminator, Damian engages his foe. The fight eventually ends when Damian agrees to wire Deathstroke five million dollars and to stand down on the battle. Agreeing to the fee, Deathstroke leaves but not before some words of wisdom to Maya, “whatever happened to your old man, make sure you find out who did it and even the score. Because a job is a job…and blood is blood.”

As the issue ends, the tomb seems to be crumbling due to the battle as well as Damian’s replacement of the canopic jars. Rushing to see a secret passageway that had opened upon the jars placement…Damian and Maya find a massive Lazarus Pit beneath the ancient tomb.

I have to say that I am thoroughly enjoying this story line…originally I had feared that it would become increasingly repetitive of Damian returning a stolen item or fixing an action that he did during the Year of Blood, but Patrick Gleason has a way of expanding his character while keeping the reader intrigued.

In this issue we see a flashback that establishes how Ravi lost his sight (something I admit to not having noticed in previous issues)…but we also see that Damian was directly responsible for this action and that in the present he thoroughly regrets having been the one to order his blindness. Although he has been making up for his mistakes and actions, this is something that the Boy Wonder will need to live with for the rest of his life.

In tune with the previous actions, Ravi stumbles upon a scene where Ra’s is shown pouring a large urn of blood over himself…I’m wondering if this is going to play a part later in the series and possibly explain Damian’s missions during the Year of Blood. Maybe each item that he is collecting is somehow empowering the Demon or otherwise stopping others from beating him. For example, we see the canopic jars were concealing an entrance to a hidden Lazarus Pit.

The Deathstroke-Damian battle was beautifully drawn however I am not sure how I feel about the “five million dollars” being the thing that stops the fight…however, knowing Deathstroke, this is definitely within his character.

Overall I am loving this story arc and looking forward to what comes down the line…I am even intrigued whether Deathstroke’s comment about finding Nobody’s killer will propel Maya to betraying Robin.