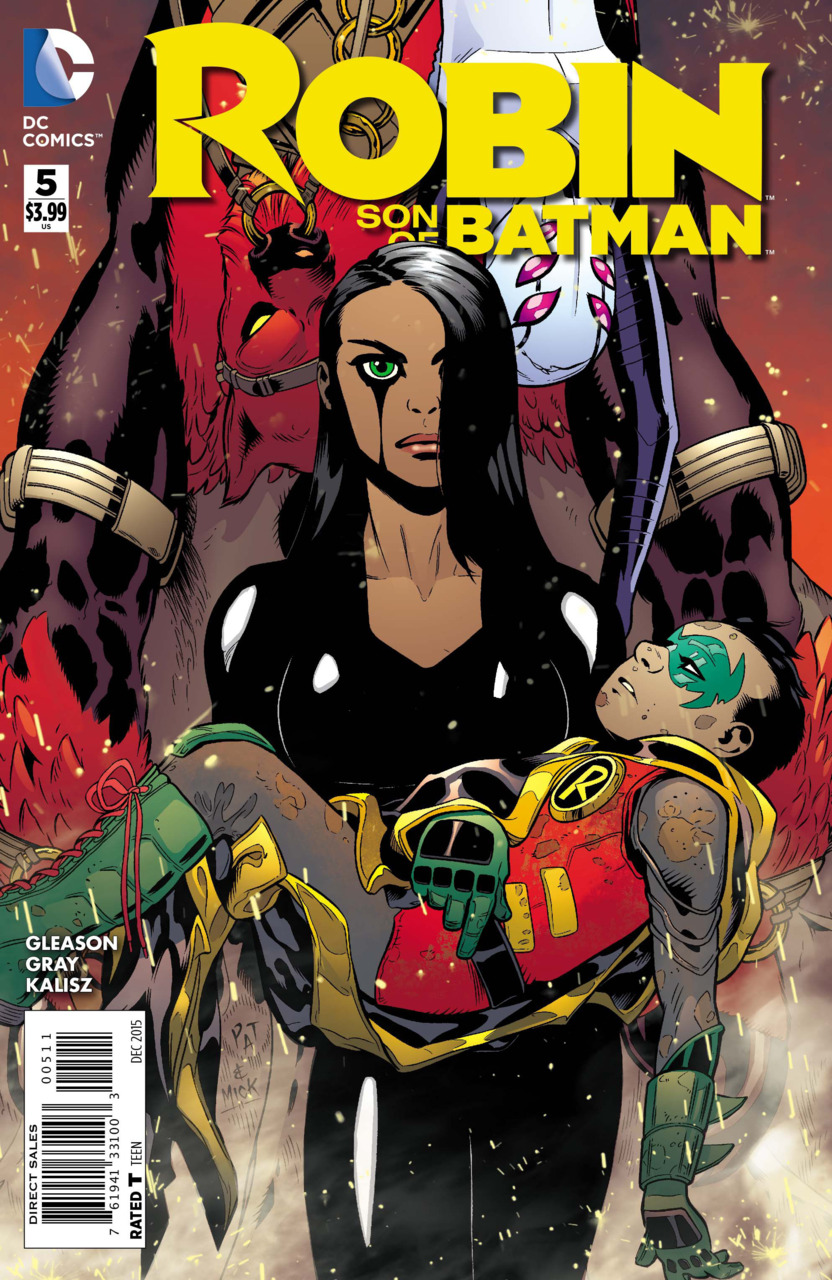 This month’s issue opens on Day 142 of the Year of Blood and we see a young Damian riding full tilt away from a burning temple in North Asia…carrying a green skull-like helmet of some kind. Shouting that the skull now belongs to Ra’s Al Ghul and it will never return to their possession, we cut back to the present where we see flashes of the different items that Damian has returned to atone for his actions during the Year of Blood…eventually settling on the skull helmet in the vault on Al Ghul Island. As Damian is collecting food for their journey, Maya is suddenly startled by the malformed clones of Damian that had been freed back in “Batman & Robin” when Damian still had super powers. Commenting that these clones are like family to him, Damian returns to the vault and notices Ravi is missing as well as the skull helmet.

Splitting up to cover more ground, Nobody uses her sonics to control Goliath while Robin grapples to the top of a temple and comes face to face with none other than his mother – Talia. As the two cross swords with one another, Talia holds the skull in her hands and explains (while fighting) that each of the relics that Damian had stolen during the Year of Blood were used to seal an ancient evil being known as Den Darga…leader of the Lu’un Darga, the same group that resurrected Talia in the previous issue. With Damian now returning the items back to their locations, the seal Ra’s placed has weakened allowing Darga to come forth.

Rising from the Lazarus Pit on Al Ghul Island, Den Darga places the skull atop his head and begins to attack Talia and Damian…blaming them for his war against the Al Ghul’s. Running to escape the destruction, Talia and Damian fend off Darga as the Island is swallowed into the ocean. Coming to his rescue, Damian’s brothers get in between Darga and Robin and sacrifice themselves to save their brother.

Sinking beneath the waves, Maya and Goliath manage to rescue Talia and Robin and bring them aboard the docked submarine which Ravi appears to have hidden in…or somehow arrived inside. The issue ends with Damian slipping in and out of consciousness on the deck of the submarine, and Talia orders Ravi to an unknown destination where someone owes her “a favor.”

Well we’re finally getting down to the dirty details and explaining what exactly “The Year of Blood” was all about…and of course, like a classic Ra’s Al Ghul story, the Demon himself was simply using his own grandson to help seal away an enemy.

I liked the fact that each item Damian has been shown returning was for a specific purpose and all lead back to Ra’s himself…however I was a bit confused on Darga’s sudden appearance on Al Ghul Island, and how the artifacts were being used to help keep him imprisoned. Hopefully this is something that gets explained further in next month’s issue.

I really liked Gleason’s art in this story, the fight with the ethereal Den Darga was really cool to look at, and I loved the panels showing the destruction of Al Ghul Island. Also, tying back to the original “Batman & Robin” series by showing us the cloned monster Damians was a nice touch…which of course led to a heroic sacrifice on their part.

Of course, who could forget the confrontation between Talia and Damian…something that was expected, and being built up to, but to me was a little bit of a letdown. After all, this is the first meeting between the two characters since Damian’s death way back in “Batman Incorporated.” Yes Damian seemed angry and outright attacked his own mother, but don’t you think he should maybe have brought up the point that she ALLOWED HER OWN SON TO DIE?! That’s just me however. It will be interesting to see what happens between mother and son as the story progresses.

Overall this series is going pretty well…I like that we finally introduced a big bad, and we saw Talia and Damian meet since they were both killed/resurrected. My only question now pertains to whether this storyline will be wrapping up next month, or if it will continue into a second arc…after all, we have only accounted for 142 days of the Year of Blood.