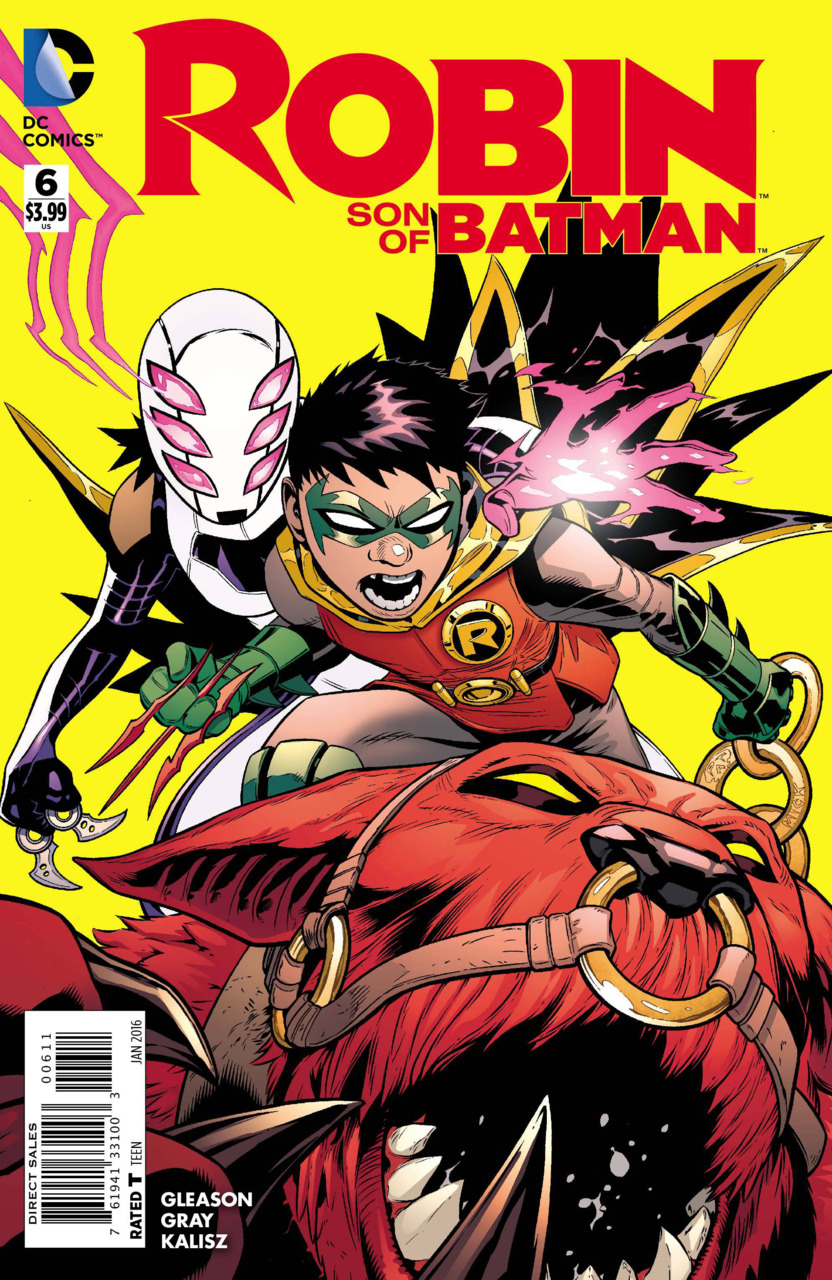 Our issue opens once again within a flashback during the Year of Blood. In Bialya, Damian is shown battling and killing several gigantic monster were-bats who are protecting a glowing green scepter. Succeeding in killing the entire clan, Damian whirls around to face his final opponent – a tiny red, winged creature. Bellowing for the tiny creature to fight him, Damian’s sword falls short as he cannot bring himself to kill the young creature. Showing affection to Damian, the young were-bat causes the assassin to dissolve into tears. Returning back to Al Ghul Island, Damian is greeted by his mother Talia as he presents to her the Scepter of the Kings…in addition he has brought the young creature as a pet. Naming him Goliath to strike fear into his opponents, Damian chains the beast in order to show his dominance over him.

Back in the present, Talia has arrived alongside Nobody, Ravi, Goliath and her injured son to country of Bialya where she presents the Scepter of the King to its ruling dictator. Deposing the ruler and declaring herself as the reigning queen, Talia begins caring for Damian.

Awakening sometime later, Damian begins talking to his mother and the two discuss the events of Damian’s death and why Talia had him killed. Talia explains that she had lulled herself into a lie that she no longer needed her son…and in an action of repentance presents Damian with a Robin costume and the black pearl that was used to change Talia from the monster-version of herself we saw earlier in the series. This pearl, if Damian chose, would change Talia back into the feral creature and allow Damian to seek his retribution against her.

Seeking out Maya, Damian finds her back on the sub as she watches different news stations reporting on the death of Batman and Joker during the events of “Batman: Endgame”. As Damian and Maya argue about whether Robin has been positively affecting the people he has helped, Maya stands by that his R stands not for ruin…but for redemption. Nearly launching themselves into a battle due to their arguments, they are only pulled apart by the timely arrival of Goliath. Eventually the two accept that they have helped each other out and Maya declares that she has grown extremely fond of the young Wayne…calling herself his sister.

In the end, Maya decides to go in search of her mother and Damian abandons a previous request by his mother – one in which they were to meet at dawn to battle to the death. In a final action of redemption, Damian declares that Goliath was never “his” and frees his friend. The issue closes with Damian leaving Maya, Goliath and Ravi behind while a letter is delivered to Talia along with the black pearl…the letter stating that he has essentially forgiven his mother, but if she decides to change her ways then there will be no where on Earth that she could hide from “the Son of Batman.”

Well I can definitely admit that this was a great ending to the Year of Blood storyline and I liked that Patrick Gleason addressed some questions that I had from the previous issue – namely why Damian hadn’t confronted his mother in regards to having him killed.

Overall I liked that this issue showcased some great Damian moments…from the origin to how he gained Goliath, to speaking with his mother about the events of his death, to deciding to forgive her and return to Gotham City to ascertain whether Batman was truly dead.

I liked that Gleason cleared up some of the continuity questions that have been burning a hole in my head since Damian came back to life. Specifically, it has been shown that “Year of Blood” was running concurrently with the events of “Batman Eternal” and “Endgame” thus explaining Damian’s absence during those particular storylines. Although these questions have finally been answered, it was rather annoying that it took well over a year to give reasons to Robin absence in some of the biggest Batman stories from last year.

All in all I am looking forward to what Gleason is bringing to the title and believe he has an extremely firm grasp on Damian as a character. I’m really excited to see what “Robin War” has in store for the Boy Wonder and I also ponder whether we have seen the last of the Year of Blood…maybe we will continue to get more flashbacks as to what transpired during those final months?