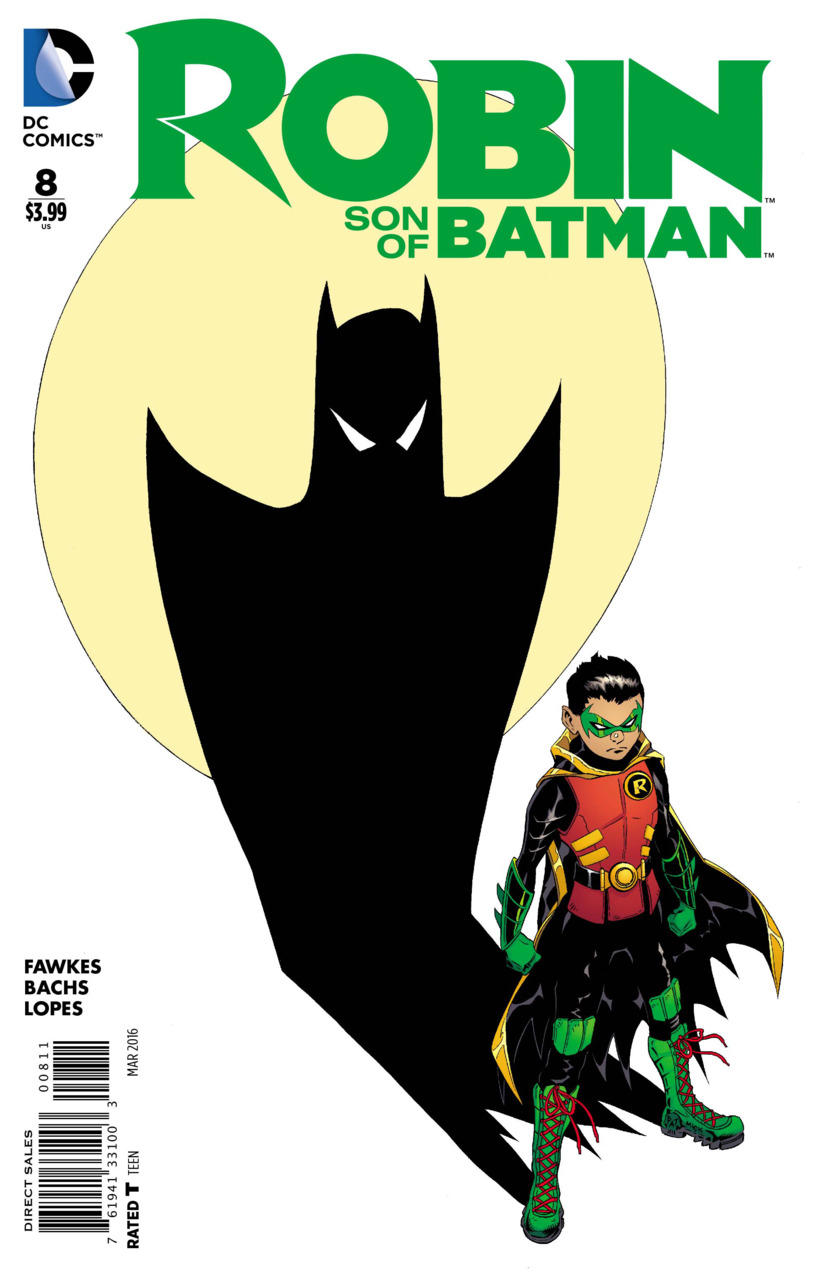 Opening upon a scene I never thought I’d view in a “Batman” comic, Alfred is shown attempting to cut Damian’s hair one handed. Sparking up a conversation, Damian begins to tell the story of the Bloodless Blade. Flashing back to a time before the events of “Robin War,” Robin is busy battling against a horde of masked warriors alongside Nobody and Goliath. Damian explains that their attackers are frozen guardians that are protecting the temple where our heroes are attempting to return the Bloodless Blade.

Flashing back to Day 202 of the Year of Blood, Damian is shown entering the temple when he and his ninjas are attacked by an unknown entity. Going to retrieve the blade, Damian speaks to the statue holding his prize…the ethereal entity reveals that Damian will return to his shrine in the future and will face the worst of himself. Back in the near past, Nobody and Robin enter the temple and are consumed by a freezing fog emanating from the statue. The two are suddenly confronted by two beings – themselves. However these mirror images are worst parts of Damian and Maya. Engaging in battle, our heroes are forced to fight the worst qualities of themselves…similarly, Goliath attempts to enter is confronted by an evil version of himself.

Coming to accept the things they view as their worst fears, Maya and Damian conquer their enemies. After returning the Bloodless Blade to the shrine, Nobody and Robin depart as they continue to their journey of repentance.

Cutting back to the present, Alfred finishes trimming Damian’s hair and offers him something to eat. Realizing his mission is not complete, Damian tells Alfred to wrap the food up as he prepares to leave yet again.

As we take a break from the double duty of Patrick Gleason’s art and writing, Ray Fawkes and Ramon Bachs step in to tell yet another story of the Year Of Blood.

I like that this one-shot starts with a bit of levity as Damian and Alfred have some great interaction down in the Batcave. As we cut back to the past, we see another story involving Maya and Goliath as Damian attempts to return yet another artifact he stole during his training. I really enjoyed that this issue had Damian being forced to face a dark part of himself…and ultimately accepting the thing that he fears the most – giving in to his anger and becoming the assassin that his grandfather, Ra’s Al Ghul, always wanted him to be. It really shows how much Damian’s character has progressed since he was introduced and ended up killing a no-name villain called the Spook.

The art in this issue isn’t my favorite…Ramon Bachs has never been a favorite artist of mine, however I have to admit that this issue is one of his better ones in my opinion.

Overall this issue helps to setup the upcoming story arc with Gleason as Robin returns once again to his atonement of the Year Of Blood. We also see that he is preparing to reunite with Maya and Goliath.