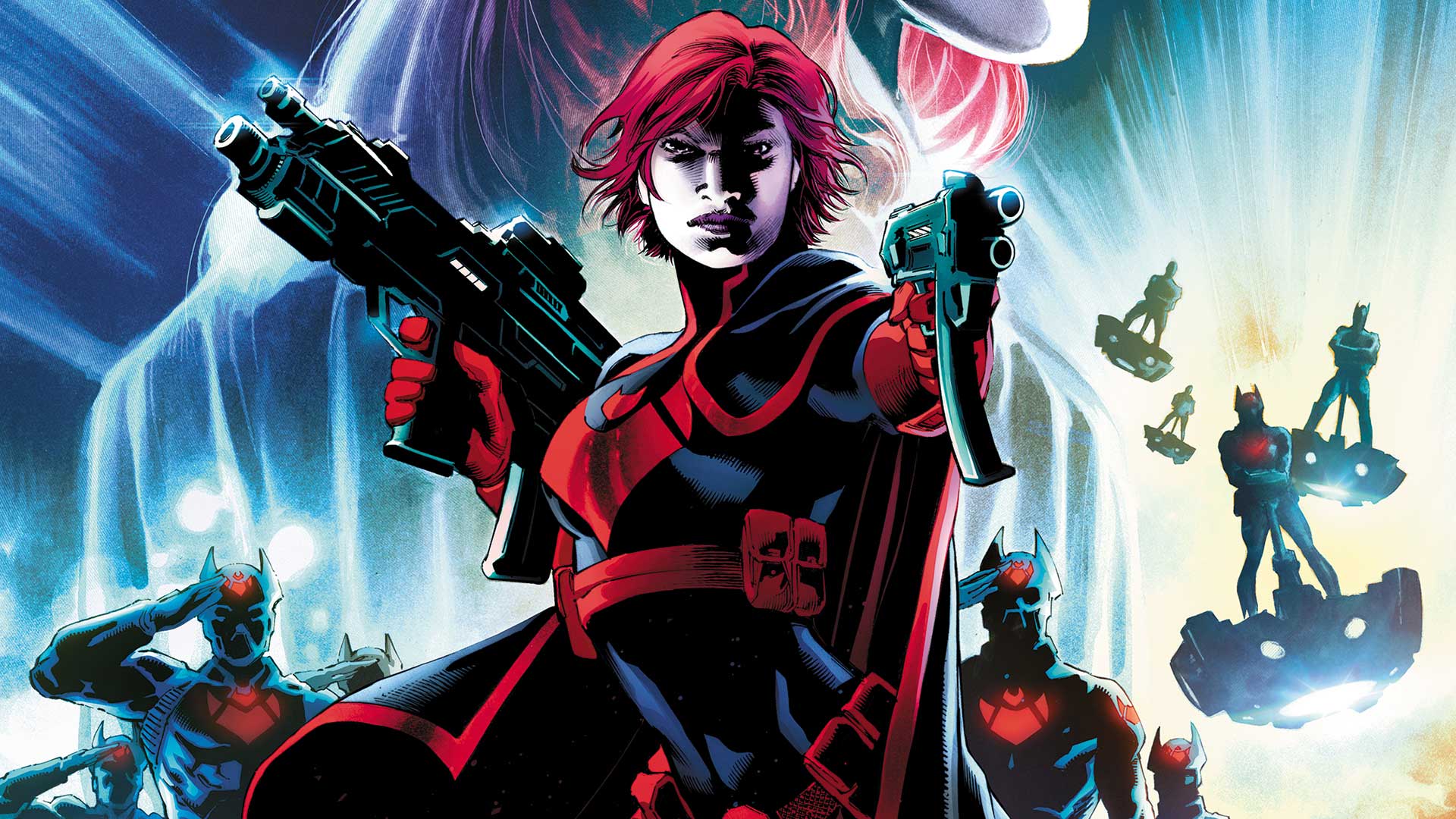 Our next comic creator interview from Comic Con is with someone who is fairly new to the Batman Universe. Like James Tynion IV, Marguerite Bennett is also a former student of Scott Snyder who made the jump into comics a few years back. Previously she has worked on some single issues in Batgirl before working on the Joker’s Daughter one-shot and then having a long stint on Earth 2: World’s End. Now she writes DC Comics Bombshells and what pertains to The Batman Universe a little more, Batwoman. We specifically spent our time talking about Batwoman and what we can expect from the coming issues.

TBU: I’m going to focus on Batwoman here. So it’s clear from your work on Bombshells as well as what you’re doing currently that you love this character.

TBU: What is it about her that draws you in?

Marguerite Bennett: God, I think it’s the fact that she’s so fallible to be honest. Just so you know, my gateway drug into comics was Batman: The Animated Series. People very often ask me who is my favorite heroine as a child. Do I like Supergirl or do I like Batgirl? But the honest answer is that I was super into Harley Quinn, Poison Ivy and Catwoman because they didn’t have to be aspirational.

I mean so much of the media that we give to children, but especially to little girls, tends to be hyper-saturated, hyper-sanitized. There is just this obsession with giving a role model, which I understand after generations and eons of horrible representations of women as tricksters, minxes and sex objects, that you would feel compelled to sort of compensate and make up for lost time with these aspirational heroines. I felt like such a failure compared to so many of those aspirational heroines, but the idea with Poison Ivy, Harley Quinn and Catwoman is they didn’t have to be good. They just have to be themselves. And it was something that appealed with me in Batwoman is the fact that she didn’t ask to have a witty one liner, close the case every time or have flawless victory every time. She wasn’t held in the same impossible high standard. She has caused damage, she had to pay for it and she had to fix it. She is human. She was fully realized and that was something that resonated so much with me, is that she felt real.

TBU: So in your Rebirth issue, we know that Elizabeth/Alice is an important and dark figure in Kate’s past. Is she someone that might pop up in your run later down the line?

Marguerite Bennett: You will definitely find out where Alice is at in the upcoming arc. After Mark Andreyko’s run, she’s had this redemption so we’re kind of look in on where she is, but then Kate’s family dynamics are going to be one of the major pieces of momentum that are driving her through this arc. We are going to see that begin on issue seven.

One to four was sort of this mystery in Coryana, this island of Kate’s past. Issue five is a flashback issue, and issue six is a flash forward issue. These two issues, this interim period are going to give you all of the puzzle pieces that are missing from the flashback to the arc that you just read and the flash forward of the arc that is coming. And so it’s a little mystery game for people to put together on their own and we’re trying to give her a past and a future.

TBU: To say that Jacob and Kate have a complicated relationship I think is an understatement.

Marguerite Bennett: Oh goodness, I’m playing mighty close to the chest, but it’s been fantastic to work with James Tynion who is my co-writer for the first arc of Batwoman and then we’re working very closely between his Detective run and the future of Batwoman. Forgive me, I feel like I have to be so close mouthed and I promise we’re cooking and it’s going to be good.

TBU: That sounds good. Julia Pennyworth, is she reporting on Kate to Batman?

Marguerite Bennett: She was supposed to. Whether or not she is fulfilling that duty…

TBU: So now my question is, why doesn’t Batman trust Kate enough? Why would he have someone do this?

Marguerite Bennett: Yes. I mean for this, it’s really the fact that Kate came into the Bat-Family as a fully realized person. He didn’t train her up. He didn’t make her Batwoman. She went out and did that herself. There’s no part of her that has his fingerprints on it; she’s her own person. And so with that even though he’s confident in her abilities, there will always be this part of him that she’ll always be this mystery. You know there are these two equals on opposite ends of this playing field and so Julia will be one of the threads that binds them.

TBU: Are we meant to ship Batwoman and Julia?

Marguerite Bennett: I do. [laughs]

TBU: Okay, well, there’s something there.

TBU: Okay, speaking of that, any chances of seeing either Maggie or Renee in your book?

Marguerite Bennett: This is another part of the thing I have to play close to the chest. In issue five, which just came out yesterday, drawn by the magnificent Stephanie Hans, has a huge part of Kate’s backstory and a lot of conflicted emotional upsetting romance, so I hope people enjoy it. It’s beautifully, beautifully digitally painted. Batwoman #5 is one of the issues that I am the proudest of in my whole career. It’s so beautiful, I’ve been waiting ages to tell a story like this and our editor was very funny about it, because he was like “oh my God, on page 4, this is one of the steamiest things I’ve ever, I’ve ever published, and everyone has their clothes on, I don’t understand.”

TBU: Another character that figured large in Kate’s life especially when New 52 began was Bette aka Flamebird, is that someone we could expect to see in the book?

Marguerite Bennett: I don’t believe we will see her on the page, but we will find out what’s going on with her coming up in Detective. It will be a spell, but we have an answer and we are looking for the right place to plug it in, the right timing and the right hit mostly.

TBU: We’ve seen Kate globetrotting right now and I think with your upcoming Scarecrow arc she’s still away, is she ever going to come back home and set up a home base and have a status quo?

Marguerite Bennett: She will come back home, home might not be where people are guessing. [laughs] So we’re going to be doing some stuff that I hope is, is dizzying and full of intrigue.

TBU: And final question, any plans to set up her own rogues’ gallery?

Marguerite Bennett: Oh yes, absolutely. I mean she is my favorite character and I have enough plot to run the rest of my life, I love her so much.

TBU: And are these going to be original characters, are going to pull from…?

Batwoman releases every month with Batwoman #5 releasing a few weeks ago. You can check out our review of the issue here. Batwoman #6 is due out on August 16. Our final comic creator interview is with Julie and Shawna Benson, Check back tomorrow for that interview.