SDCC 2019: Batman becomes the First Inductee to the Comic-Con Museum Hall of Fame 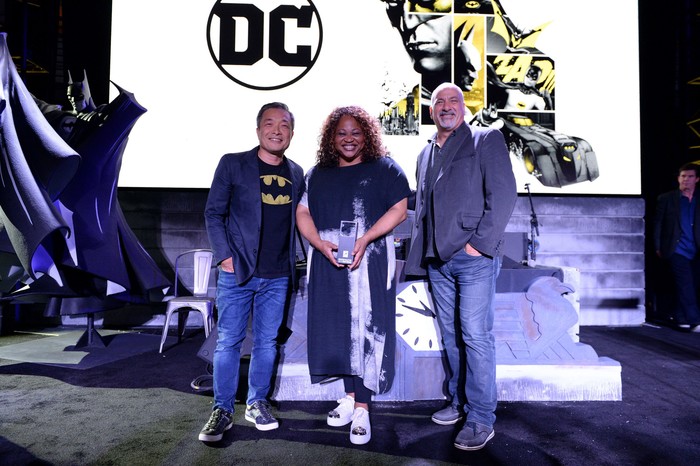 Last night, Comic-Con International inducted Batman as its first inductee into the Comic-Con Character Hall of Fame in front of a crowd of more than four hundred Batman fans, celebrities, and comic creators. Jim Lee, DC’s Chief Creative Officer, accepted the award on the company’s behalf. In his speech, Lee noted, “Batman is real in every person who summons the strength and resilience to keep going. That is a superpower. There’s no other way to describe it.”

While Batman’s induction occurred at a fundraising event for the upcoming opening of the Comic-Con Museum, opening in 2021, it was apparent the evening was all about the Dark Knight. Event-goers were able to participate in the many parts of The Batman Experience, DC’s partnered event with parent company AT&T before it opened to the public the following day.

While the president of Warner Bros. Brands and Experiences Pam Lifford pointed to Batman’s continued connection across the mediums of comics, television, and more, publisher Dan DiDio stressed Batman’s beginning and ending in publication. “Comic books are the test lab for Batman,” DiDio said. “It’s where we take chances, where we experiment with new ideas, new concepts and storylines. Those experiments in turn inspire other artists, filmmakers, and writers. I love to see stories we’ve worked on become the basis for other media like video games, movies, and TV shows.”