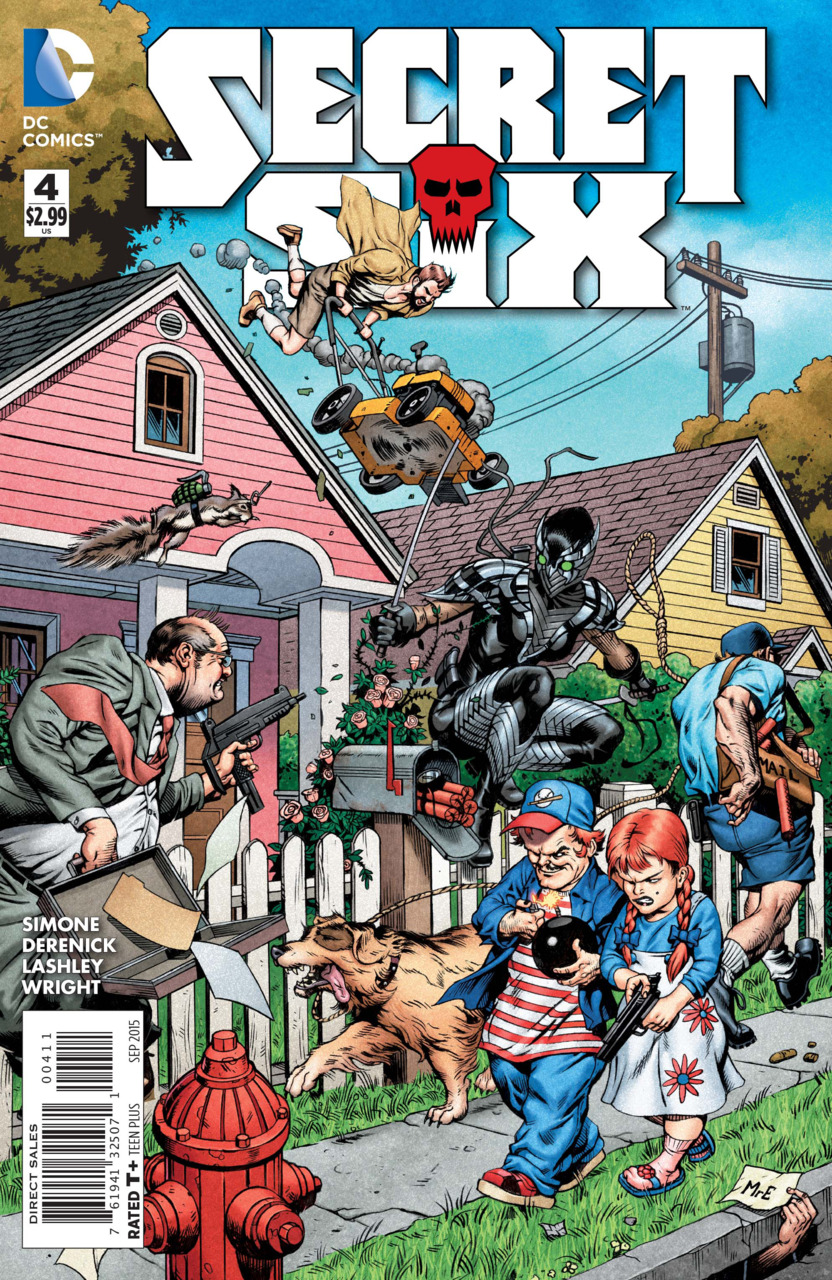 “Friends in Low Places” opens two days ago and centers on how the team ended up in Big Shot’s home. We start with Blake and Shot buying hot dogs and discussing where they are going to go. After all, they are felons on the run. Shot knows where they are headed but he has not told the team yet. They have stolen a van; Black Alice is still sick from the electro torture she endured in issue two. They are making stops at everyone’s home to pick up their “kits”. A strange man approaches the team stating that he is ready. This man is actually Porcelain; he/she actually has the ability to change his/her gender at a whim. As he puts it “sometimes she feels like a girl…other days not so much.” Big Shot gives Porcelain his hat. Strix lands from a nearby tree. She tells Blake by note that they are being followed. Blake is not surprised. We close this scene with the team in the van heading out. But we see two masked people watching them leave and report in to Mockingbird.

The scene shifts to the Mockingbird’s nest. The plan is the strangers are to take the Six out. Actually they are to bring them back to Mockingbird and where they will be locked up in his private jail, the same jail we saw Blake being held in issue two. If the strangers do this then their “special friend” will be freed.

The Secret Six arrive in Big Shot’s home. Big Shot asks if they lost their tail. Blake does not think so. Blake knows that they are being followed by a man and two women. Blake wants the Six to suit up and prepare for a fight. After an interlude in a car where one of the followers is talking about attaching a grenade launcher to a squirrel we cut back to Big Shot’s home. We see the team suited up and Big Shot opening the door. The three strangers still masked are at the door holding cookies. They want to have a chat. It appears that they have a mutual oppressor. Mockingbird has abducted two women they care about and he will free them if the Secret Six agree to a year in his private prison. Blake reveals that he was in that prison and he has no intention of going back and the fight begins. Fights go on all over the house with Blake, Strix and the man taking the fight outside. One of the women comes up behind Blake and Blake discovers that he knows her. She was the woman in issue two that gave Blake the kitten to ease his sanity. The woman’s name is Scandal Savage and her associates are Ragdoll and Jeannette. She asks if Blake will reconsider the original offer to surrender which he does not. As the three walk off, Blake suggests they combine forces with the Secret Six to take down Mockingbird. Savage just says that they need to get themselves in order, as they are now, the Six will only hold her back. Jeannette sticks around to say that she is a banshee and she can smell death in the house. One of them is going to die and she leaves, leaving the Secret Six in the street. Next Block Party.

This was a disjointed issue. The first complaint I have is why this is not issue three and last month’s story issue four? I do not see why these stories are flipped. This ordering of the stories interrupts the flow of the Riddler being Mockingbird and Big Shot being a possible traitor to the team.

It also appears that this book is the depository for Gail Simone’s villains, first we see her take on the Ventriloquist and now we see Ragdoll presumably also from her run of Batgirl. Who is the Jeanette? Where did she come from and what is this about her being a banshee as she puts it. The man we see as Mockingbird does not look like the Riddler at all.

It appears that concepts were thrown in without any sense of the story. The only saving grace was the fight at the end was fun but that was just about it.