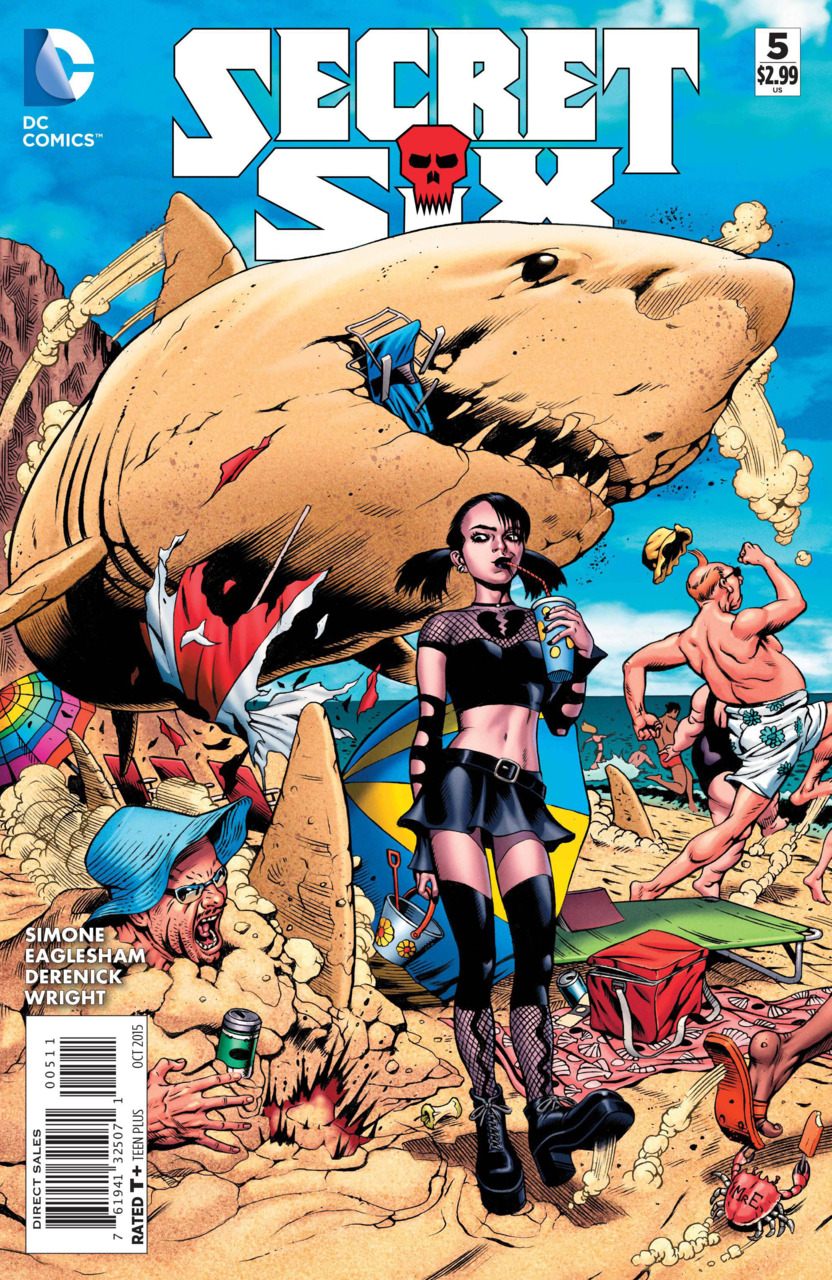 “Block Party” opens in the back yard of Big Shot. Big Shot is barbecuing for the group. After some small talk, Wells asks Blake where Alice and Strix are. Strix is holding the garden gnome in a tree while Alice is still resting in Wells’s bedroom. Blake goes to get her so she can get something to eat. He wakes Alice who is have a dream about Swamp Thing and a bunch of wizards. She is telling Blake about this dream when Blake sees the photo of Wells’s wife. Blake has a flashback of the woman shocking him and he declares that the woman is not dead but someone will be. Blake grabs the photo and runs out of the room knocking some plaster off the wall. Alice forces Blake to promise that he will not hurt Wells.

Outside Blake confronts Wells nicely about the woman in the photo and this enrages Big Shot. Strix comes down from the tree and joins the others who are sitting down to watch the fight. Big Shot grows and attacks Blake. Only Strix jumps to Blake’s aid as the others just watch. Black Alice changes into a Hawk like character and jumps in the way of the combatants. This stops the fight and Big Shot admits that the mysterious Mockingbird is the Riddler.

At the pier we see the Riddler with a couple of his goons talking to the three who attacked the six in the last issue, Jeanette, Ragdoll and Scandal Savage. The three leave and Susan strokes Riddler who is now expecting company.

The Secret Six now in their stolen van are driving to an unrevealed destination. Big Shot admits that his name is not Daman Wells, but rather Ralph Dibny. He recounts a story of before he became Big Shot. The Riddler had a diamond called the India Star and he wanted to show it off during a party on a yacht. Ralph who was trying to retrieve the diamond brought his partner Susan on board the yacht where The Riddler took a fancy to Susan. Catman and Strix were there supplying security. Ventriloquist admits to crashing the party while Porcelain and Alice were there to steal the diamond. During the show off of the diamond Riddler proposed marriage to Susan and the lights go out. When the lights came back on the diamond was gone and the yacht explodes. Riddler ordered Catman to take out Dibny while the guests run to the lifeboats. The ship’s crew abandon Riddler, Susan, and the Secret Six on the yacht when a second explosion hits. Ralph and Sue were separated and Dibny assumed she was dead.

The Secret Six arrive at their destination and Blake tells Big Shot that Susan was not killed, in fact he saw her. Big Shot has brought the team to the location of Nygma’s new ride believing that they will find him there and take him out. Susan shows up and Big Shot stretches to hug her. Just then, the team is hit with tranquilizer darts incapacitating them. Blake realizes what is happening and rushes to attack Dibny who stretches and punches him to the ground. The Riddler and his interestingly dressed gang shows up and declares that there will now be a wedding. Next issue whippings and apologies.

I am happy that the story is finally moving forward but that is where my enjoyment ends. This issue still is part of a long multiple issue set up, but here we finally get some reveals.

The reveal that I am most unhappy with, that Wells, AKA Big Shot is really Ralph Dibny. I really liked the character of Ralph when he was a member of the Justice League in the previous continuity and I believe his use here is a slap in the face to this fine character. Using Ralph as the mole in the Secret Six who is working for the Riddler is in my opinion disgusting. Ralph as I know him was a moral center to the League, he was a detective but he had a heart and an altruism that made him a hero. By taking that hero and turning him into this character now really makes me angry. When I was reading this story for the first time and Wells revealed his true identity my head hit the table I was sitting at. I still have an interest in what happens with this story but it is slowly becoming a train wreck and for that I will give this issue one batarang. There were some good reveals, mainly linking all the members of this Secret Six with the diamond party at Riddler’s yacht was interesting but revealing Wells’s true identity left a bad taste in my mouth.