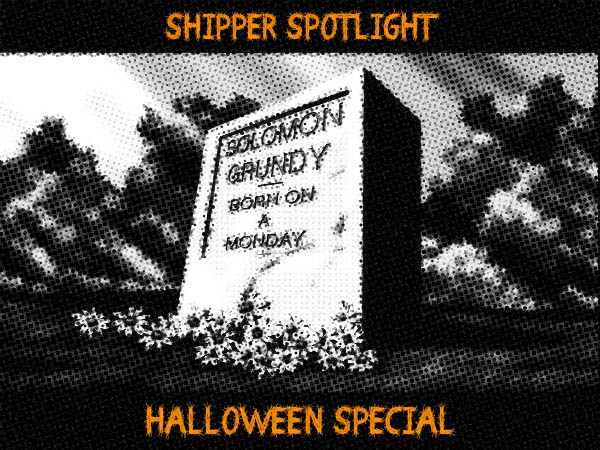 Born on a Monday,

That was the end,

THE HISTORY OF SOLOMON GRUNDY

In the late 19th century, a wealthy merchant named Cyrus Gold is murdered and his body disposed of in Slaughter Swamp, near Gotham City. Fifty years later, the corpse is reanimated as a huge shambling figure (composed partly of the swamp matter that has accumulated around the body over the decades) with almost no memory of its past life. Gold murders two escaped criminals who are hiding out in the marsh and steals their clothes. He shows up in a hobo camp and, when asked about his name, one of the few things he can recall is that he was “born on a Monday”. One of the men at the camp mentions the nursery rhyme character Solomon Grundy, and Gold adopts the moniker.

This Halloween special highlights two dear relationships that the zombie Solomon Grundy has had in two different media: comics and TV.

Solomon Grundy was a frequent sparring partner with the Golden Age Green Lantern, Alan Scott.  Solomon Grundy later learned about Scott’s children, the superheroes Jade and Obsidian, and went on a killing rampage against them and their teammates of Infinity, Inc in Infinity, Inc. #23. Unable to permanently get rid of Grundy, the Infinitors imprisoned him and took him to the hidden civilization of Feithera in the Arctic Circle. The Feitherans studied Grundy until the long-dormant glacier surrounding Feithera shifted and threatened the city. Jade made a deal with Grundy that, if he held back the glacier long enough to save the Feitherans, she would free him and take him somewhere warm. But the glacier collapsed and buried Grundy before she could honor the terms of their bargain.

In Infinity, Inc. #36, Jade and some of her teammates return and help Grundy break out of the ice.  Grundy is initially quite angry at Jade and goes after her, blaming her for being trapped in the glacier.  This fight is distracted by the appearance of the First Crime Family of Sports.  While Artemis has Jade at a disadvantage, Grundy saves Jade and shows care towards her.  Later, in a Solomon Grundy spotlight in Infinity, Inc. #39, Grundy considers why he likes Jade when he hates Green Lantern.  He concludes that she kept her word, returning to free Grundy from the glacier.  For that, he vows to be her protector and becomes a member of the team.

Unfortunately, Grundy’s regard for Jade is used against him by the villainous Harlequin in Infinity, Inc. #51.  She impersonates Jade and Grundy does whatever she asks, including killing Skyman, the leader of the Infinitors.  Harlequin continues to use her disguise as Jade in order to recruit him into the villain team known as Injustice, Unlimited.  He nearly kills the remaining members of Infinity, Inc. in #53, until the real Jade helps to convince him that he has been tricked.  He puts Harlequin down for good and walks away.  Months later, Grundy was found by some farm workers in the countryside, and went on a rampage. Jade found him and tried to reason with him, but his trust in her was now gone.

For such a cute and protective relationship, it did not last long.  It was great to see Solomon make such an attachment, one which changed him in a way, making him fight with, rather than against, the good guys.  Unfortunately, this pure love was perverted by Harlequin and forever tainted, probably breaking whatever heart Grundy had.

In the Justice League episode ‘The Terror Beyond,’ Icthultu invades Earth and Grundy fights along the side of Aquaman, Dr. Fate, Inza, Superman, Wonder Woman, and Hawkgirl.  In return for helping, Grundy wishes to have his soul returned to him.  The body of Grundy is needed for a particular spell, and while it causes extreme pain to the loveable zombie, Hawkgirl at first believes that it is a worthy sacrifice in order to protect the Earth.

Grundy begins using the name ‘Bird-Nose’ to describe Hawkgirl, a name which both epitomizes Grundy simple nature and ties the two together.  Grundy comes to Hawkgirl’s aid often in the moments leading up to fighting Icthultu.  Hawkgirl even saves Grundy, which baffles him until she explains, ‘Grundy helps Bird-Nose, Bird-Nose helps Grundy, ok?’  This relationship, however short-lived it may be, recalls that between Grundy and Jade as he watches out for Hawkgirl and develops a fondness for her.

This particular episode develops Grundy into a more sympathetic character because his single-desire, that of a soul, portrays him as more than just a mindless killing machine.  He ultimate dies during this search, making his way to the center of Icthultu and asking Bird-Nose to find his soul for him.  Hawkgirl held his hand while he faded away, telling him that his soul is waiting for him, despite not believing in such things.  This makes Grundy happy, stating that ‘Grundy gets his reward.’  Hawkgirl buries Grundy and pays reverence at his grave while the others walk away.  Her strong, warlike demeanor softens in these last moments, showing that Grundy was special to her.

Later, Solomon Grundy is awakened by chaos magic instituted by teenagers.  He is resurrected into a mindless being with no sense of who he was before.  His rampage makes the attention of Hawkgirl (at the time off the JL and living in Dr. Fate’s tower).  She is aware that only her mace, made of Thanagarian Nth-Metal, is able to give him peace.  This alone brings her out of her self-ordained seclusion.  She comforts him in the end, offering him the peace he desires before ending his chaotic life.  The fact that he does not resist in the end, allowing Hawkgirl to help him, proves that there was a part of him that remembered how much she meant to him.  The fact, too, that this act has a great emotional toll on Hawkgirl, shows the impact of Grundy on Hawkgirl, even after his death.

You may not have believed it when this spotlight started, but Solomon Grundy does have his warm and loveable moments.  These are just two examples of the zombie that Grundy could be, influenced greatly by two strong women.  If Grundy can find someone special that he can care for, should we not all be able to?

That’s it for this month’s special installment of Shipper Spotlight.  Stay for more shipping in later months!