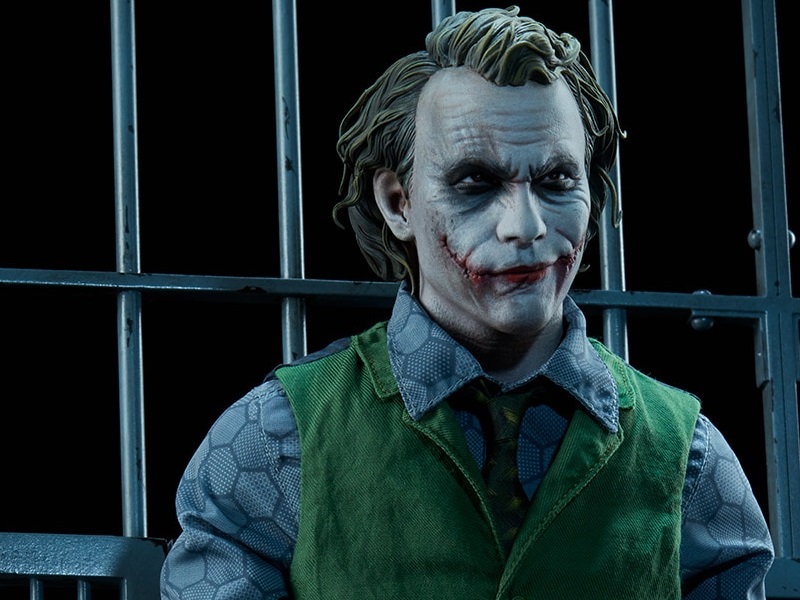 Sideshow Collectibles has announced their latest offering which comes from 2008’s The Dark Knight. Based on the scene when Heath Ledger is locked in the Gotham City Police Department, this new figure will have a standard collector version and a Sideshow exclusive version. The standard version is priced at $635. The exclusive version is priced at $650 and includes an extra pair of hands that have a clapping pose. Both versions are expected to ship between June and August of 2020. You can pre-order the statue from Sideshow Collectibles now.

The Joker Premium Format™ Figure measures 20” tall and captures every chilling detail of Heath Ledger’s haunting performance as the Clown Prince of Crime himself. Based on the Gotham City police department scene from the film, this collectible includes a detailed environment base with jail bars that can be magnetically placed in front of or behind the figure for multiple display options.

The polystone Joker Premium Format™ Figure includes a fully fabric, custom-tailored costume recreating Ledger’s signature style from The Dark Knight. The dapper and dramatic villain is suited in a green vest over a blue hexagon-patterned dress shirt, along with a green patterned necktie, purple pinstriped pants, and even a pair of multi-colored socks. The clownish killer sits biding his time with an unnerving smirk on his face, his portrait carefully sculpted in Ledger’s likeness down to the worn-in application of makeup and scars of his Glasgow smile.

The Exclusive Edition of The Joker Premium Format™ Figure includes a pair of swap-out clapping hands to recreate his infamous round of applause for Gotham’s very own Commissioner Gordon.

Bring home The Joker Premium Format™ Figure to your Batman collection today and savor all the… little emotions this terrifying villain adds to any DC Comics display.