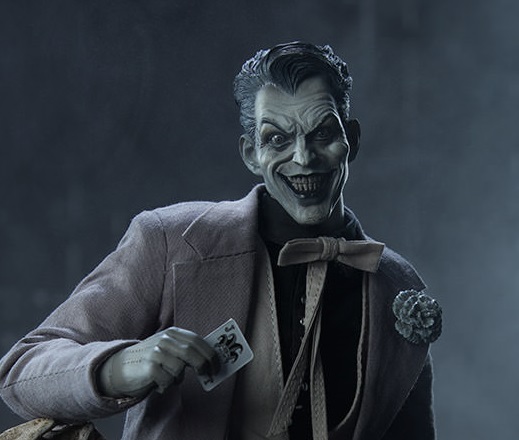 Sideshow Collectibles has released their latest Sixth Scale Figures, which feature Batman and the Joker in black and white noir style. Joker measures about a foot tall and features interchangeable hands and weapons. The figure will be available in a limited edition of five hundred. Joker is priced at $240 and is available now. You can order the figure over at Sideshow Collectibles now. Details for Batman can be found here.

“I don’t hate you because I’m crazy… I’m crazy because I hate you!”

The Joker Sixth (Noir Version) Scale Figure features an intricately tailored costume in dapper black, white, and grey tones, giving the Clown Prince of Crime a uniquely vintage appearance. His costume consists of a fabric suit jacket and pants, a vest, a dress shirt, and a bow tie. He also has a sculpted lapel flower, shoes with sculpted spats, and ten different gloved hands; a pair of grip hands, a pair of fists, a pair of card-holding hands, and additional hands for pointing, holding his cane and gun, and a hand with a gag buzzer.

The Joker (Noir Version) Sixth Scale Figure has an articulated body, perfect for crafting any number of clownish or cruel poses in your collection. His monochromatic portrait is inspired by his DC Comics appearance, complete with his signature makeup, coiffed hair, and a sinister smile. The figure comes with a number of detailed accessories for executing The Joker’s most devious schemes, including The Joker card, a cane, a crowbar, and a knife.

Terrorize the town and get the best of Batman when you add The Joker (Noir Version) Sixth Scale Figure to your DC collection today!