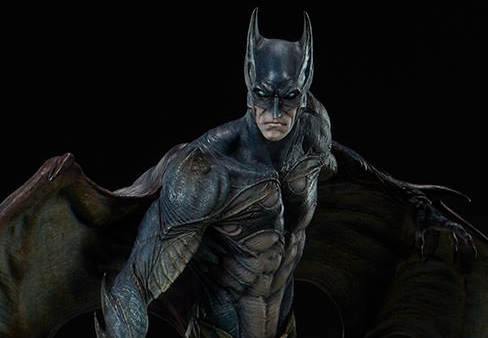 Sideshow Collectibles are now accepting pre-orders for a new Batman Statue. The statue is the first in their new line of Gotham City Nightmare Collection. Each statue will appear based off how the character may appear after being exposed to Scarecrow’s fear toxin. The first statue will feature a twisted version of Batman. The statue will cost $525 and ship mid-2018.

He is the night, and the nightmare.

Sideshow is thrilled to present the Batman Statue, the chilling first installment in the Gotham City Nightmare collection.

Gotham City Nightmare dares to ask, what would the familiar faces of Gotham become when viewed through eyes filled with fear? The Batman Statue gives you a glimpse of the Dark Knight like never before.

In Creative Director Tom Gilliland’s words, “Out of the obscurity comes this vigilant force of justice, but it’s not a knight in shining armor- it’s the lord of darkness.”

No longer a crusader in just a cape and cowl, Batman has taken on a more sinister style as a bat creature, poised on top of a warped Gotham gargoyle, his wings spread wide. Disgusting creatures like bats, rats, and centipedes crawl at Batman’s clawed feet, emerging from the stonework on which he stands.

Batman’s body is carefully sculpted with sinewy flesh capturing the monstrous melding of his suit design to the creature’s skin, painted with deep blues and greys to give him his chilling appearance. A subtle bat symbol covers his chest, integrating into his anatomy and further deepening the nightmare.

The Exclusive edition of the statue comes with a swap-out portrait that depicts the ghoulish defender of Gotham as an even more monstrous, bat-like entity. This “Demon Bat” appearance awakens the most fearsome features of Batman as he appears in your worst nightmares. The exclusive version also includes a small pedestal for displaying the alternate portrait.