The Hole in Things: A History of Simon Hurt (Part Three) 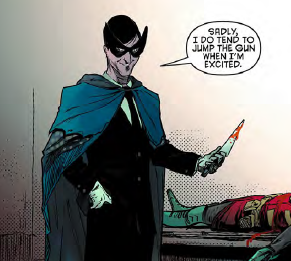 Dr. Simon Hurt has returned in the pages of Nightwing. Now shaped by the talented creative team of Tim Seeley and Javier Fernandez, the enigmatic super-villain is bringing new unspeakable acts of terror upon Dick Grayson once again. For our final installment of an examination into the publication and narrative history of Hurt, let’s take a look at the first time Hurt and Dick challenged each other. (Check out part one and part two for a full look of Simon Hurt.)

Following Final Crisis in 2008, the status-quo in the DCU had dramatically shifted. Batman, for example, was not only MIA, but believed to be dead by his friends and family as well. In actuality, Bruce was trapped in time by Darkseid’s Omega Sanction. Dick Grayson and Damian Wayne took up the mantle of Batman and Robin, respectively. Dick’s biggest task in filling his mentor’s shoes was to take on Hurt.

Dick’s dealings with Hurt begin almost right away with Grant Morrison’s Batman & Robin #1-6 (2009-2010). Now going by the name “El Penitente” and head of a Mexican cartel, Hurt unleashes the Circus of the Strange (including the debuting Professor Pyg) upon Gotham. He then sends one of his top assassins, Eduardo Flamingo, to Gotham as well. The new Batman and Robin defeat these new threats—with unlikely help against Flamingo from Red Hood (Jason Todd). While Hurt plots revenge against the Bat Family and all of Gotham, Joker plots his own revenge against the Black Glove, disguising himself as the masked “Oberon Sexton.” The Hurt arc continues a few months later with Morrison’s “Batman vs. Robin” (Batman & Robin #10-12). Hurt, with complete knowledge that Oberon Sexton is the Joker, orders him to fall in line, but, of course, Joker scoffs at the idea. Hurt sends his army of assassins known as the 99 Fiends to kill both Batman (Dick) and Joker. Meanwhile, the Bat-Family learns that Bruce is lost in time. Beneath Wayne Manor, Dick and Damian find a hidden room—previously used by Hurt and the Black Glove for occult rituals. In the secret exit attached to the room, Dick finds the tiny casket with the bat-symbol on it (left by Bruce in the past). Dick is then mauled by a giant bat—the Hyper-Adapter retreating backward through time after its defeat at the end of The Return of Bruce Wayne. Again, more on that later. The 99 Fiends steal the mini-coffin from Dick. Hurt returns to Gotham along with the only surviving Finger of the Black Glove, a Texas senator named Vine. Just after Hurt returns, Dick, Damian, and Alfred confirm that Hurt is without-a-doubt old Thomas Wayne—as referenced in Batman & Robin #15-16 and Batman: The Return of Bruce Wayne #5-6. The Bat-Family learns Hurt’s whole story from top to bottom. Dick also learns more about the mini-bat casket and how to open it. Hurt’s arc comes nearer to its conclusion with “Batman and Robin Must Die!” (Batman & Robin #13-15). The 99 Fiends break Professor Pyg out of jail and reign chaos over Gotham. At his lair on Crime Alley, Hurt holds the bat-symbol casket, but still doesn’t know how to open it. Pyg captures Gordon and activates a citywide viral narcotic, turning hundreds of Gothamites into violent junkies. In three days’ time, Hurt controls all of the city. Hurt makes his public debut, posing as a returning Thomas Wayne (Bruce’s father), claiming that he never actually died. Amid a media blitz, Hurt makes his triumphant return to Wayne Manor. Meanwhile, Joker curiously drops a banana peel on the steps in front of the secret underground exit in Wayne Cemetery. Eventually, Dick and Damian wind up captives of Hurt, who plugs a 32 caliber pellet in the back of Dick’s skull. A crazed Hurt then demands that Damian pledge allegiance to him. Dick opens the mini-casket and Hurt can’t believe it, rushing to examine the box. Unfortunately for Hurt, he has no idea that Bruce invented the box as a red herring. What’s inside? A note that reads “Gotcha!” Dick and Damian double-punch Hurt to the ground, who shakes out the cobwebs to see another Batman standing over him: Bruce! Bruce has arrived from Batman: The Return of Bruce Wayne #6, in which he was able to return to present day by defeating the Hyper-Adapter, which metamorphosed into a giant bat (reflective of Batman) and then retreated backward through time (a trick Morrison used before when Darkseid fell backward through time after dying). The bat appeared in the catacombs beneath Wayne Manor where Dick encountered it, in 1765 where it endowed Hurt with extended life, and in 38,000 BCE where it was slain by Vandal Savage at the start of Batman: The Return of Bruce Wayne #1. With two Batmen and a Robin, Hurt’s story comes to an end in Batman & Robin #16. The heroes defeat Hurt’s army. Bruce then beats Hurt to a pulp and saves Alfred. Hurt tries to flee through the secret cemetery exit, but, on cue, he slips on Joker’s banana peel and breaks his neck. Joker shovels Hurt (now paralyzed and with a Jokerized grinning rictus face) into an empty grave, burying him alive. That’s it for the main Hurt arc, but I would be remiss if I didn’t mention Hurt’s appearances in the “666 future,” which was fleshed-out in Morrison’s Batman #666, Batman #700, and Batman Incorporated Vol. 2 #5. Years after his defeat, Hurt makes another return. Shortly after the death of Batman (revealed to be Dick Grayson in the quasi-canonical Damian: Son of Batman), a grieving Damian is manipulated into making a deal with “the devil” in which he trades his soul for the ensured survival of Gotham. This devil is Hurt. We never learn what is really involved with the “deal,” but we can infer that Damian is granted some sort of semi-immortality or healing factor. This is clear in Batman #666 when he survives heavy machine gun fire and in Batman Incorporated Vol. 2 #5 when he survives being blasted at point blank range with a shotgun. As shown in Batman #666, nearly a decade of in-story time later, Michael Lane returns to Gotham at the behest of his master, Hurt. Dressed in his “substitute Batman” costume and obsessed with destroying new Batman (Damian Wayne), Lane attacks, but is killed by Damian. A couple in-story years later, as shown in Batman #700 and Batman Incorporated Vol. 2 #5, Hurt has ascended to the highest levels of politics, becoming a trusted advisor to the President. Batman (Damian) and Commissioner Barbara Gordon fight-off the entire populace of a government-quarantined Gotham, which has been completely Jokerized. Per Talia’s orders, Hurt uses his government position to get the POTUS to authorize a nuclear strike on Gotham.

Hurt also shows up in Convergence #3, only to be unceremoniously blown-up. Convergence is its own beast, an arc that has a dubious and confusing canonical status—not officially a part of Hurt’s timeline. That brings us to current day publications where Hurt is back in the pages of Nightwing. Will Hurt’s devilry leave Dick and Damian with permanent scars—both physical and emotional? Hurt certainly has the potential, but that remains to be seen. Judging by his actions in Seeley and Fernandez’s Nightwing #18-19, it’s already been a bad time for our heroes, but a great time for fans.