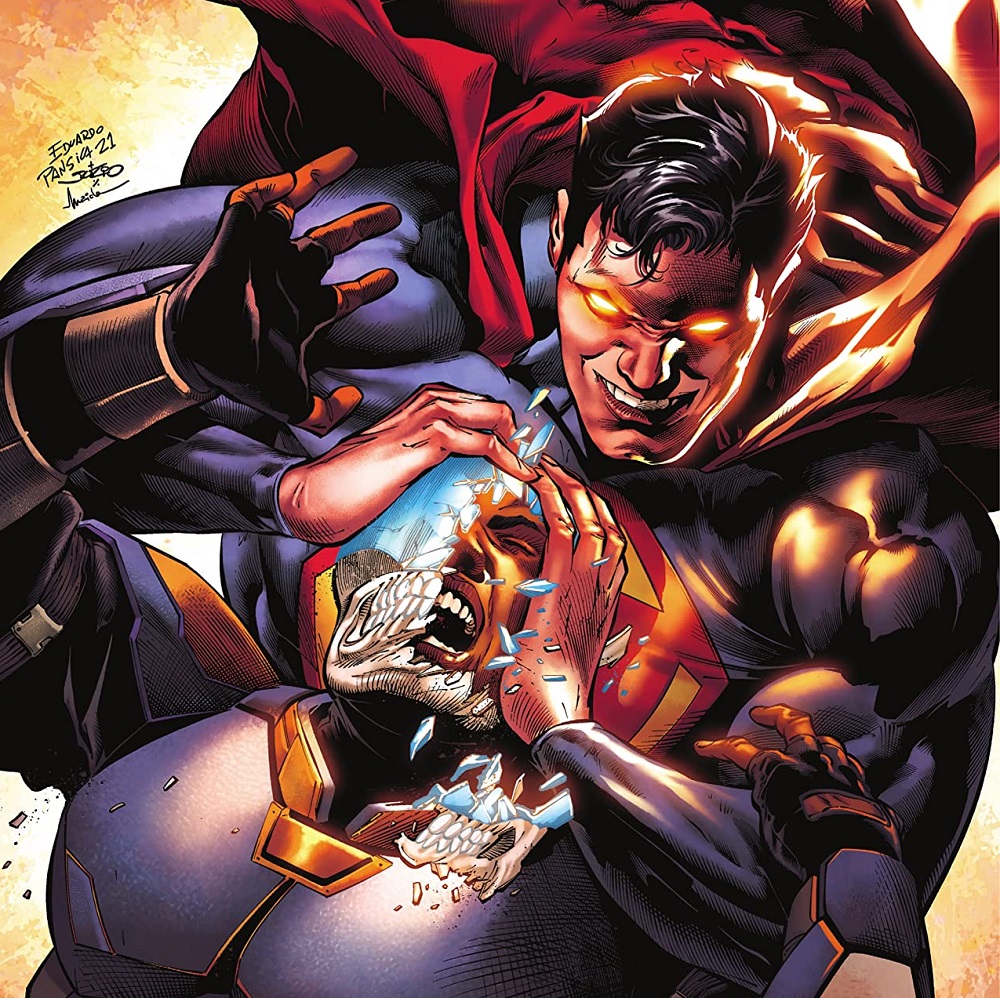 Overview: In Suicide Squad #6, the team travels to Earth-3 to face Earth’s mightiest villains and to maybe take one or two of them along the way!

Synopsis (spoilers ahead): With Bloodsport captured on Earth-3, Amanda Waller prepares Task Force X for an extraction rescue mission in Suicide Squad #6. First, they need a new recruit: Night Terror, a meta-human with the ability to phase through matter. After a short battle, the Suicide Squad returns to Belle Reve with their new partner, who is immediately taken into the custody of Dr. Rodriguez, who preps Night Terror for a particularly nasty procedure.

Meanwhile, Amanda Waller observes another mission in progress: Peacemaker is in the forest, tracking Swamp Thing. Through exposition, we learn that Peacemaker is on this mission apart from the rest of the Task Force so that she may better observe how loyal he is to her and her overall plans.

About an hour later, we learn the reason behind Night Terror’s capture: to synthesize her abilities and incorporate them into wrist bands, which are given to the remaining members of the Suicide Squad, and will help them survive on Earth-3, if for a limited time. They have an hour to teleport to Earth-3, rescue Bloodsport, capture Black Siren, and return.

They arrive in Metropolis of Earth-3 and are soon discovered by Ultraman, who immediately attacks them and kills Branch in the process. He demands Kryptonite from the newcomers, but before he can make good on his threats, Black Siren and Bloodsport make their appearance, momentarily distracting Ultraman.

Culebra quickly subdues Black Siren and with Bloodsport, the Task Force’s mission is complete. While Superboy provides a distraction for Ultraman, the rest of the Squad make for the extraction point, and during their run Culebra discovers that Talon’s vocabulary isn’t as limited as he’d been making out. With Ultraman at his heels, Superboy just barely manages to skate into the extraction point before the portal collapses, frustrating Ultraman as he crashes into a building.

The team regroups and find that they’ve not been teleported to Belle Reve as expected but to the Earth-3 equivalent of Russia. Waller sent them there in order to retrieve some medicine for Superboy, whose vitals had begun to climb to dangerous levels during the fight with Ultraman. Before they can get any more information, however, they are confronted by the Earth-3 version of Superboy.

Analysis: Superboy was concentrated on the most in Suicide Squad #6. We aren’t given many, if any, answers into the how’s of his involvement with the Suicide Squad. Rather, we’re lead to further questions. His memories are being manipulated, and this concept in itself presents some interesting ideas. When he’s battling Ultraman, Waller, in her desperation to keep his unique qualities for her own uses safe, is willing to take a different and unusual route in bringing him back. She plays to his ideals of not killing. We know Waller is by no means against killing but actually uses his own morality from making that move himself. Yet this suggests he WAS willing to kill Ultraman. With the mind manipulation at play, does this mean that Superboy is inherently willing to take a life, but has learned or trained himself to follow a more noble and judicious path of altruism, when we are generally led to believe that said altruism is the actual nature of a hero such as Superman or anyone else on the Justice League? I would love to see this concept further explored.

We now have Talon betraying his front of stupidity to Culebra. This is the second time he is revealed to be playing dumb, bringing him one step closer to his own reckoning with Waller. Unlike the situation with Superboy, which seems to be a more profound realization that can impact his psyche, Talon’s arc seems to be just about delaying his inevitable discovery. We don’t see this leading to any long-term or deep impact other than a tiring charade which, once discovered, will then prove to have been useless unless he has used it to an advantage which we are not privy to.

Peacemaker has been put to a trial by Waller by going on his own to track and retrieve the Swamp Thing’. To what end would this mission prove that he is loyal? Peacemaker isn’t stupid enough to try anything with this strange monster, especially knowing the amount of power Amanda Waller has, and not being familiar enough with the means at his disposal to be able to do anything of import. The only thing, then, that Waller is concerned about is the return of Flag.

The artwork in this issue is gorgeous and detailed, depicting aptly the emotions that several of the characters display in their subtle moments. The story is beginning to branch out, allowing the possibility of a variety of events to bring Waller’s operation to a head. But to what end are we heading? We still don’t have an inkling of any grand plot point in which these ends would be embattled.