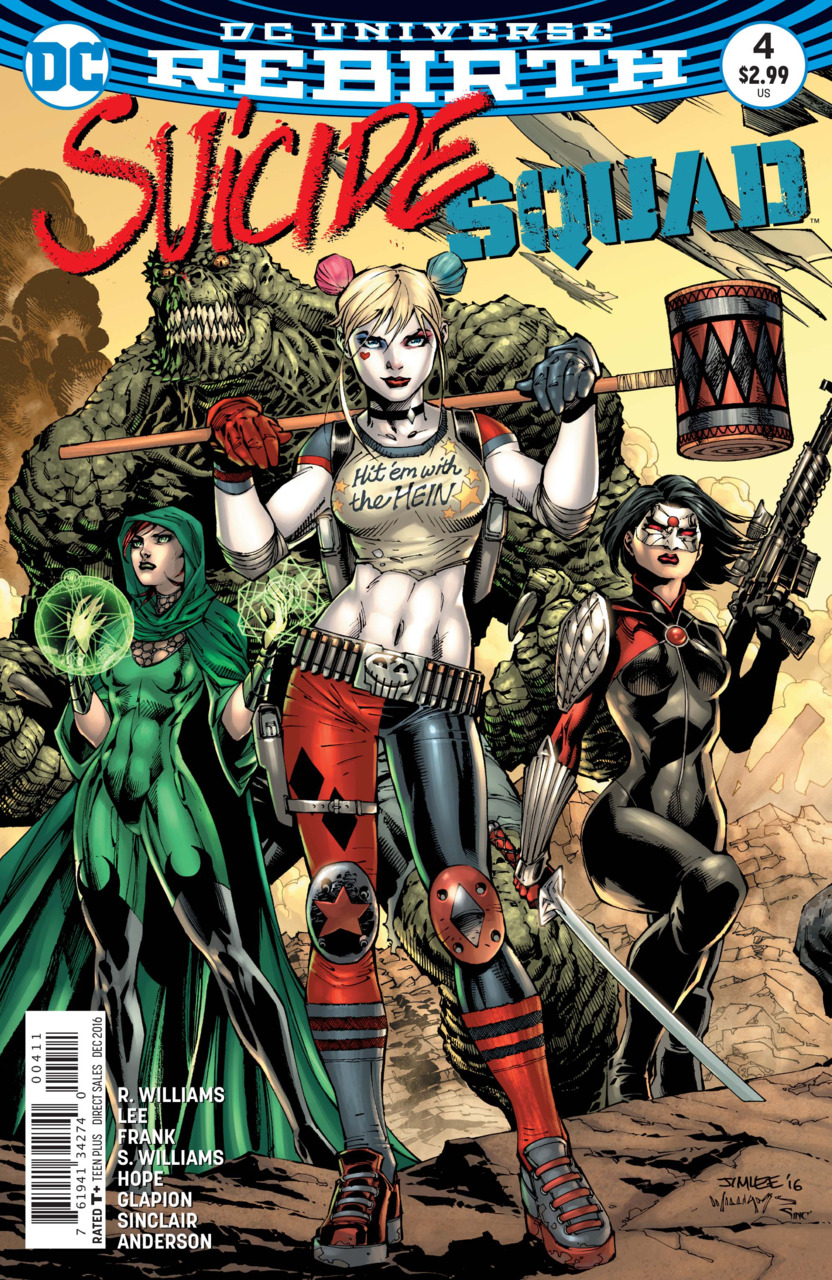 Synopsis: We continue from where we left off — in an underwater prison in Siberia, where what’s left of the Squad is trapped in between the Annihilation Brigade (apparently Russia’s response to Task Force X) and a crazed General Zod. Deadshot is holding back the Brigade with a barrage of bullets while Zoe attempts to execute the threat that is June Moon – Graphic Designer, until Croc clamps down on Zod’s arm, which just annoys him. Zoe throws him across the room and he just happens to knock into the Brigade.

With most of the crew down, Flag attempts to buy the team some time by fighting Zod. Katana tosses Rick her magic sword, and with aback finished downloading all of Russia’s information on this place, Flag stabs Zod through the chest and kicks him back into the Phantom Zone.

Hack transfers the team over to Belle Reve where their bodies are de-digitized. Flag doesn’t seem to take the loss of Boomerang well, as he feels responsible. But, thanks to the mission, Waller now has in her possession the “black sphere”… aka – the Phantom Zone.

Script: Rob Williams continues to show promise with this series, but the pacing is just KILLING THIS BOOK. His introducing the Annihilation Brigade kinda seemed pointless seeing that they did absolutely nothing, but I won’t hold that against him as I believe that he has plans for them in the future. However, how he introduced them, I will hold against him. You just got to plan better than that. This story felt like it could have taken place in two issues instead of four… And that’s very disappointing. Like I said, pacing is the biggest issue right now, and it’s making this book suffer. I’m still holding out hope for this book to pick back up. We’ll see what happens.

Pencils: Jim Lee’s pencils continue to be dynamic as well as humorous at times (as always). But that pacing issue I mentioned just a few paragraphs ago, this guy is the main cause. I like the guy’s art, but if he is the reason this book only gets twelve to fifteen pages of story then he needs to go. You can’t kill the book like that.

Inks, Colors, and Letters: There are SO MANY inkers this issue, its crazy. Scott Williams, Sandra Hope, Jonathan Glapion, and Trevor Scott all ink at some point. And if you pay attention, you can kinda see where these pages change hands. I think Glapion’s style would match nicely, but there are so many, the switch-up made it noticeable. Another issue was Hi-Fi filled in for a few pages for Alex Sinclair. I’m not sure what the deal is here. Hi-Fi’s more dynamic stuff matches up well with Sinclair, but some of his other moments were way too harsh to match with what Sinclair does in other pages. He passed, but it wasn’t a perfect match either. Rob Leigh letters this issue, and he does a decent job here. No complaints from me, as he seemed to do a better job matching the guy who came before him that the rest of the group did.

Backup Synopsis: Amanda Waller and Rick Flag are discussing the pros and cons of having Harley Quinn on the team. Flag decides to test her. Just Harley, him, and some backup (aka red-shirts). They give her an ultimatum essentially. If she passes she can remain on the team, if she fails, she is dropped into the deepest darkest hole in Belle Reve… The mission plays out like;

Flag gets some intel on a storage location for Joker toxin. The team finds a canister of Joker gas along with some chainsaws in an aircraft carrier. Just as everyone gets inside, the tank goes off — infecting everyone on the crew. Harley starts hallucinating and talking to David Bowie–I mean the Joker, as the no-name soldiers begin attacking Harley. She and Flag take them all down, however Flag is shot and infected. He lunges at her, but she takes him down as well. Joker encourages her to leave the team and find him, but she refuses. Instead, she bandages Flag and calls in Waller for a pickup. Flag comes to, and says that he thought he saw her talking to someone. He asks her if she was infected too. She responds, “No. I’m immune.”

Backup Analysis: Again, the backup was the better story. At this point, I’d kinda like more of an Anthology of the Squad as opposed to the actual Suicide Squad book. Rob Williams is able to show off his understanding of these characters more in their own little moments much better than he can in the main series. Gary Frank pencils and inks this backup, and he did an amazing job. His facial expressions, Bowie as Joker, the ability to show someone has gotten messed up without it being just gratuitous violence was all very impressive. Brad Anderson did a fantastic job coloring this issue. He made certain pages pop more than others, but still maintained a consistent feel. His tone was spot on. Rob Leigh lettered this story as well, and had more opportunities to play around. I thought he did a great job here as well.