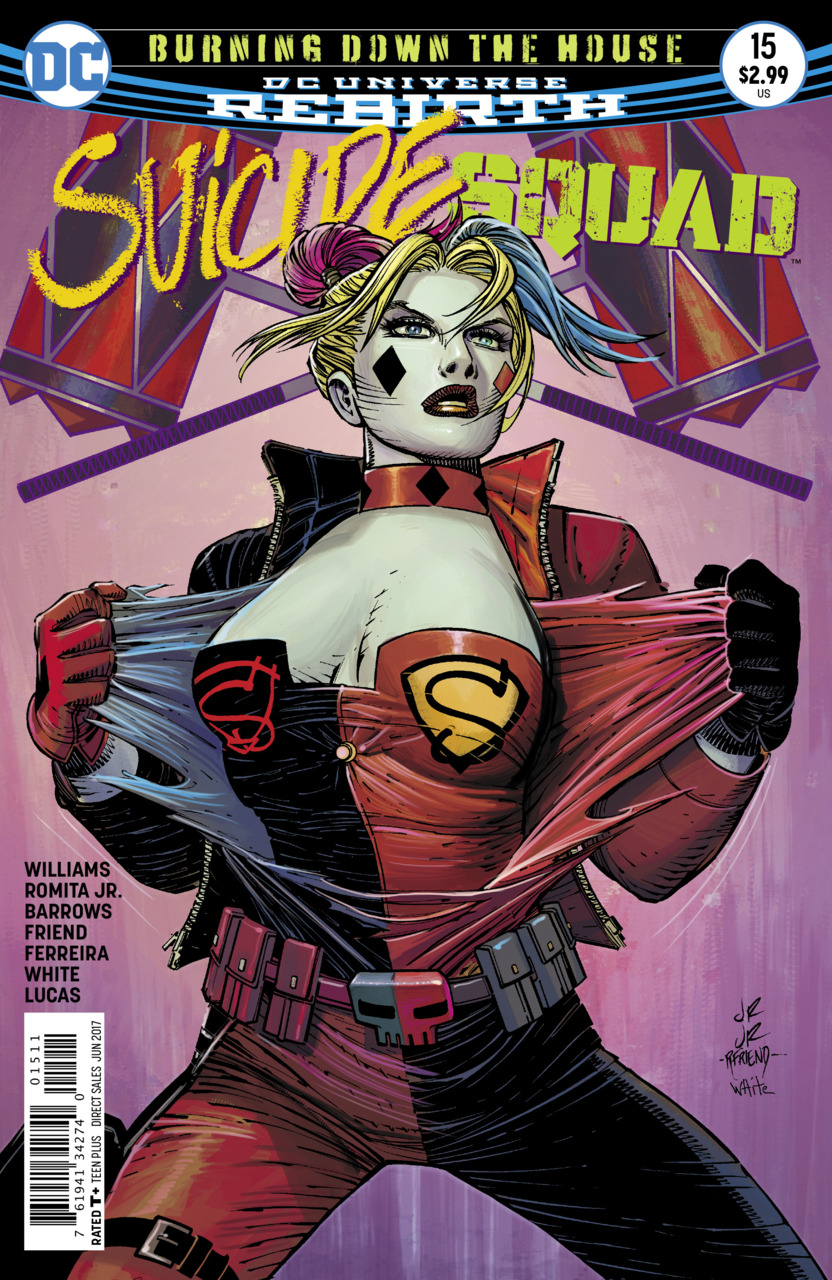 … To catch you up… Rustam, former leader of the Suicide Squad is seeking revenge on Amanda Waller. So far, he’s had Rick Flag and Katana chained up and beaten. He’s killed many U.S. political figures. Harley Quinn has just been shot. Hack is dead. Deadshot is a double-agent and killed Amanda Waller… so things are looking pretty good for Rustam… except for Amanda Waller currently standing in front of him with a giant futuristic gun that looks like it came from Men in Black.

Synopsis (Spoilers): Waller points out to Rustam that he’s never been in control, despite him feeling otherwise. His soldiers try to talk him into escaping, but Rustam is too angry to back down. Katana gets the drop on them, however. Freeing herself from her chains, she leaps forward and steals back her sword from Rustam and cuts off Deadshot’s hand. Rick Flag clocks Rustam in the face, and Harley reveals that she was wearing a skimpy Kevlar vest underneath her clothing all along!.. Comics!

Enchantress takes on the tech guys, handling them easily. Croc goes at it with the Lion dude, and looks forward to eating him. Captain Boomerang decapitates the guy in the suit, while the rest of the team fires their guns at Rustam. He gets the upper hand, (because when you bring magic swords to a gun fight, you win) and lunges toward Waller when he is shot from behind by Deadshot. See, Deadshot was a triple-agent! Waller asked him to pretend to join Rustam and kill her so she could have an inside guy, while also protecting her children… and all those politicians he killed, she wanted them gone, as she believed his targets to be members of a terrorist group.

Back at Belle Reve, Hack is being placed in the morgue. Harcourt tells Amanda Waller that the security cameras were scrambled, so there is no way to know who did it. Meaning there is still a traitor on the team. Waller promises revenge, and Floyd Lawton finally gets to spend an evening with his daughter.

In the second story, Waller and Harcourt are back at Belle Reve. Waller reveals that the association that the political figures were part of is a group known as The People. Waller didn’t save every life, but she saved the right lives. Harcourt seems to take offense to this, and wants to know how she’s still alive. They are interrupted by Rick Flag, who has the team working clean-up by tracking down loose criminals from Belle Reve. As for Blackgate… Batman has that covered.

Harcourt finds Rustam in a stasis chamber, as it seems Waller seems to be keeping him… just in case. Waller goes on to inform her how she worked with Enchantress to make a magic bullet, and for Deadshot to shoot her in the heart, creating all the signs of a death, but giving enough time to have heart surgery afterwards. By doing so, Rustam would stay away from her children, and she could work from the shadows.

The president has given full control of Task Force X back to Amanda Waller, and that includes any plans she may have with General Zod… She and the team make their way to Metropolis. There is something that she needs to have control over Zod… something that Lex Luthor has… Kryptonite.

Analysis: Rob Williams wraps up this story arc in a satisfying way – everything ended up wrapping together nicely, most of which I saw coming (like the Deadshot triple-agent), but it’s nice to be right. The pacing here seems to be a bit erratic, and I feel like most of that is due to the splitting up of the comic… but again, that’s nothing new. Deadshot has a new mechanical hand… so that’s a thing. Harley wears a Kevlar vest… that’s also a thing. The reveal to that was kinda unnecessary, considering that Harley does nothing to further the plot, nor the story in this issue, I feel like she could have spent the week in a hospital, and the next issue would start out the same. Captain Boomerang’s betrayal is still a secret to the team, and he has Harcourt to worry about, so there are still some interesting plot points there. Do Waller’s kids know that she’s alive?… probably not, but we didn’t know they existed before, so who cares. Are Harley and Rick going to be a thing? Apparently. That keeps popping up.

John Romita Jr.’s art here feels pretty rushed here in a few places. The way he draws Waller is inconsistent. Her weight fluctuates from panel to panel. Also, the one with Harley revealing her vest looked bad. Like it was stretched in some sort of editing process, and not in a good way. Her legs look like noodles. I feel like things looked better the further along you went, but I wonder how Romita likes this comic schedule.

Richard Friend does decent here. Again, some panels at the beginning looked a little overdone, but it got better as it went. Dean White’s colors didn’t pop like they usually do. It wasn’t a bad effort, but it didn’t seem to have the pizazz that it has in past issues. However, I believe it has some to do with the lack of changing the scenery.

Eddy Barrows does a great job, as always. Although it seemed he had the epilogue part of the comic… it just doesn’t seem like much happens here. The explanation of Waller’s plan was the real standout here, and the reveal for what’s to come in future issues was done well. Barrows’ Luthor is a bit intimidating.

Eber Ferreira does a fantastic job inking here. He balances the page well with lots of blacks, yet giving the colorist plenty to work with. Adriano Lucas does a great job coloring. Again, my favorite is the flashback where he uses grey tones with a lime green to highlight the page. I look forward to seeing this team continue to be on this book. Hopefully they’ll be doing full issues. Pat Brosseau and Carlos M. Mangual letter this issue, and both blended their work well together.

Pick Up or Pass: If you’ve been getting the other issues, I see no reason to stop now. If you haven’t, I’d look for next issue. It’s the beginning of a new story, and Tony Daniel and crew are listed for art… if they are the only team, this book could be making a turn for the better.

In Conclusion: As far as character development, and team dynamic, this was a very engaging story. Hopefully Williams can ride this momentum into the future and have only one artist on the book at a time.