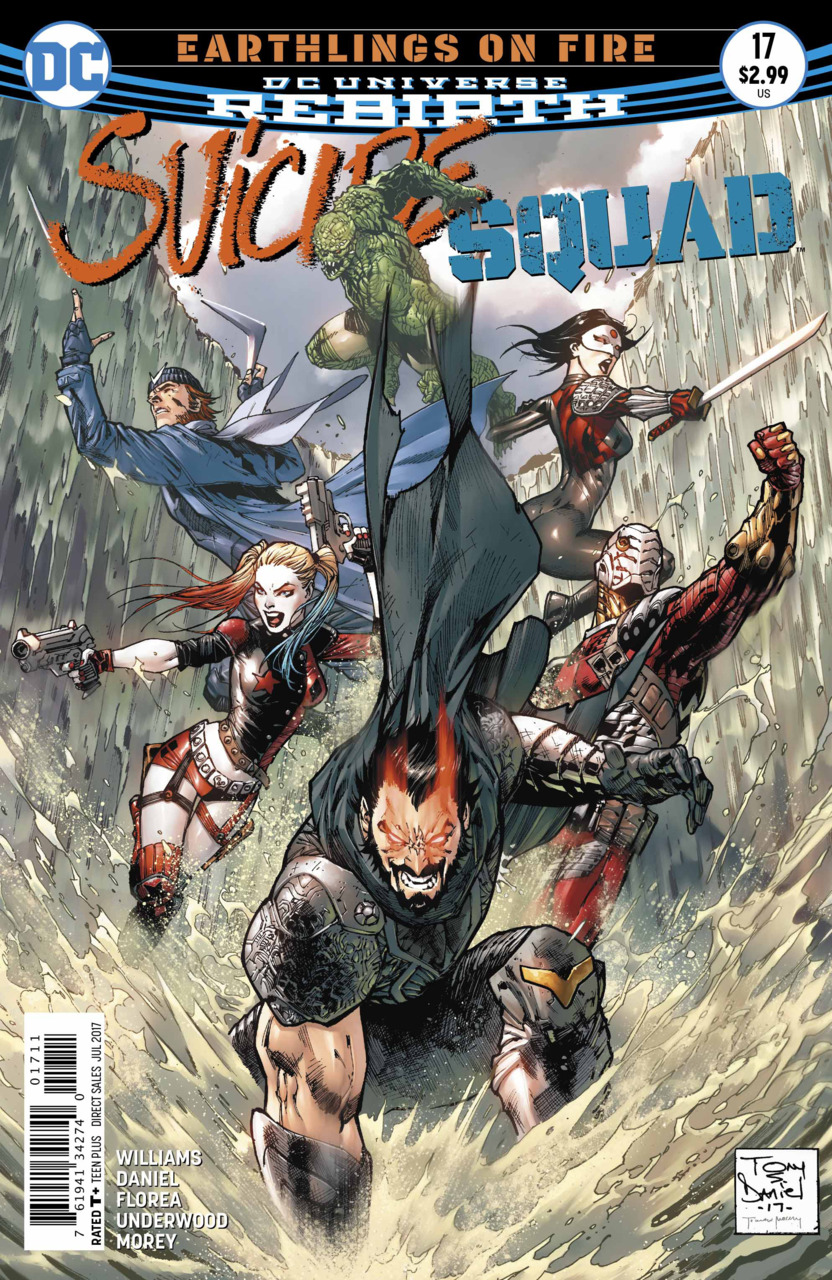 To catch you up: Amanda Waller stole a gateway to the Phantom Zone, and pulled General Zod out. Using SCIENCE!… she plants a Kryptonite bomb inside his head, of which she received from Lex Luthor last issue. She now wants this crazed psychopath on the team.

Synopsis (Spoilers): Amanda Waller has gotten word that the Annihilation Brigade are hiding in the falls of Zimbabwe, and sends her Task Force X to deal with them. Zod is released, and rushes past the rest of the team while Harcourt points out that Boomerang isn’t with the team right now. Waller gives her a suspicious side-eye and acknowledges the fact, telling her that she has him on another mission. Harcourt backs out of the room, while Waller directs the team.

Zod begins fighting the Brigade all on his own, and starts by cracking Tunguska’s containment suit (Tunguska is essentially a walking Nuke, so his suit breaking is a big deal). Cosmonut stops Zod by smashing him in the head with his own hammerhead while yelling “Peanut emoji!”. Zod, dazed and on the ground, says that his head hurts, and Cosmonut, again, screams “Peanut emoji!”. Just as the rest of the Squad catch up, Tankograd (a walking tank with a machine gun) begins shooting at the team. Croc shields the remaining team members while Harley and Deadshot fire back. Croc takes out Cosmonut, and Harley and Deadshot distract Tankograd while Katana slices his neck from behind. Flag orders Harley and Deadshot to find and retrieve their data banks. Instead, what they find are a group of African metahuman prisoners. Flag orders Enchantress to teleport the team out of there just as Tunguska explodes. All the team members are accounted for, and they were able to take a prisoner to interrogate along with them – Cosmonut, who, again, shouts “Peanut emoji!”. Harley feels guilty about not being able to save those prisoners, and Flag comforts her.

Harcourt makes her way down to the mainframe and shoots the four workers who were down there in the head. She knows she’s compromised, as Waller knows who she is. She downloads the frequencies to Zod’s Kryptonite bomb so the People can use him for their cause instead. She sends the encryption to her Direktor (and no, I did not spell that incorrectly) Karla. Harcourt also knows Waller has a backup bomb underneath the grounds of Belle Reve in the case of a riot, and she begins the timer for that and leaves.

Harcourt heads to the helipad on the roof of the penitentiary, but is met by Waller. Harcourt points her gun to Amanda’s head, and tells her how her Squad has inspired the People, and how they are going to use her methods to take their world back. She pulls the trigger, but it only clicks as Amanda Waller cracks a smile and admits to having all but four bullets removed from her gun. She also tells her that Belle Reve will not explode at the end of the countdown, and how it was a fake program to trick her. Instead, her sending the information to Karla, gave away the position of her Direktor. Waller tells her how she’s going to pay for killing Hack. Harcourt smashes Waller in the face with her gun, calling her the devil, and how she only manipulates people. She tells her that she didn’t kill Hack, and just before she can say who did, a bladed Boomerang punctures through her skull.

So Waller interrogates their new prisoner, Cosmonut, but the only information she gets from him is about a peanut emoji. Harley and Flag hook up. And Zod stares into the black sphere (gateway to the Phantom Zone), reaches out and says “Soon”, as some creepy creatures from inside reach out back at him. Zod walks over to a mirror, and begins to burn a hole in his head to get the bomb out via laser vision.

Analysis: Rob Williams script continues to feel like it has potential, yet in just doesn’t feel inspired right now. The characterization and the dysfunctional interaction between them all is what keeps this book on track. The overall tone perfectly captures the essence of what this book should be, but there’s just no substance there… No meat on its bones. And although I like how most of the characters are portrayed, there are others who feel one-dimensional… Enchantress for example… there is no emotional pull for that character. She’s just a plot device. Killer Croc only feels like he’s had an arc because of the different stories that have focused on him since the New 52. Here, he’s hasn’t done much. With other characters like Deadshot, Boomerang, Harley, and Flag story elements have been sprinkled throughout, there just hasn’t been a satisfying payoff with any of them. In this particular story, Zod is a crazed idiot who speaks in the third person 24/7, and has the insatiable urge for people to kneel… yes, that is a line in which he’s known for, no, that’s not all he is.

Tony S. Daniel’s art is captures the gritty quirkiness of this book. I’ve noticed that he struggles with perspective in the details… on the cover, for example; the barrel on Harley’s gun doesn’t match the perspective of the rest of the page. It’s just off. This holds him back. His character designs are really good. Everyone looks great. Sandu Florea and Lebeau Underwood ink this issue and both do a great job. Their styles were close enough, that I couldn’t tell where the transition happened. Both of them have very sharp, thin inks and leave plenty of room for the colorist to work with. If I had a critique, it’d be that they blacken some negative space when called for, to add a little more depth to the page. Tomeu Morey does a good job coloring this issue. There was a scene halfway through the book where it looked unfinished. The colors were darker, and it looked a little flat. For the entire book, I thought he did great with his textures and contrast, but then this one panel is different. Now maybe it’s because Daniel put the sun in the background, so he darkened the colors to add some realism. Now I’m not saying it looks bad, because it doesn’t. It just doesn’t match with the tone throughout the rest of the book. Pat Brosseau letters this issue, and does a solid job. I’m still just confused over the peanut emoji… I get that the guy is called CosmoNUT, but I don’t know why he’s called that, or why he speaks in pictures. It’s just a weird unexplained choice.

Pick Up or Pass: In my opinion, this book has yet to warrant a definite “buy” from me. It might get good – it has a constant feeling of potential – but until it gets to that point, it’s just not something I’d introduce to my non-comic reading friends to.

In Conclusion: We are now seventeen issues in, and I still can’t get a good read on this book. It has so much going for it, but then it gets in its own way for one reason or another.